Veterans Day originated from Armistice Day, which commemorated the end of World War I on November 11, 1918. It was proclaimed a federal holiday in 1954 under President Dwight Eisenhower and is now celebrated from coast to coast honoring the brave men and women who have served our nation.

Every year, Coronado Middle School (CMS) honors military personnel, living and deceased, who have dedicated their lives to protecting our country. In an event named “Take a Vet to School Day” and celebrated just before the federal holiday, this tradition is one of the highlights of the school year. Due to the COVID-19 pandemic, Take a Vet to School Day was celebrated much differently this year. Instead of live entertainment, a delicious breakfast, story-telling, and the infamous “Line of Gratitude,” the entire dedication was live streamed on KCMS, CMS’s very own news broadcasting system. The celebration can be viewed at Coronado Schools Television at http://coronadotv.me/cms/11092020-516.

CMS Principal Karin Mellina shared, “We were sad to not be able to put on our annual Take A Vet to School Day event this year. However, with the support of our Military School Liaison Officer, Mindy Hayes, and our partnership with the Coronado Naval Base, our KCMS News students and teacher Michelle Evenson put together a heartwarming news broadcast that streamed live on Monday, November 9th.”

The celebration commenced with a patriotic performance of the National Anthem by the Navy Band Southwest, who graciously provided music throughout the broadcast. 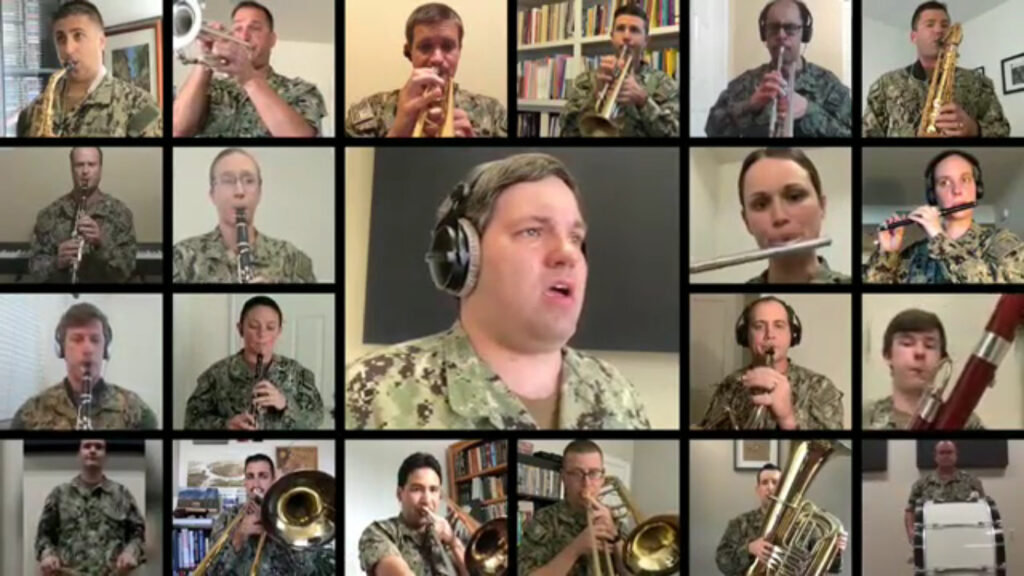 Next, Lieutenant Tom Wester of Naval Base Coronado gave a virtual behind-the-scenes tour of USS Howard, a guided missile destroyer. Commissioned on October 20, 2001, USS Howard is 590 feet long, weighs 9500 tons, and can house 330 sailors at any given time. The pilothouse can drive the ship with 100,000 horsepower at 30 knots, and the forward vertical launch system can shoot missiles that are three stories tall. Two anchors and two rigid hull inflatable boats are among the special features of USS Howard. Lieutenant Wester displayed multiple parts of the ship, including the flight deck, air traffic control center, a passageway (PWAY), main medical, mess line, combat information center, and wardroom to name a few. Did you know that 330 sailors aboard the ship can go through 212 dozen eggs, 180 gallons of milk, and 8200 pounds of meat just in one week? 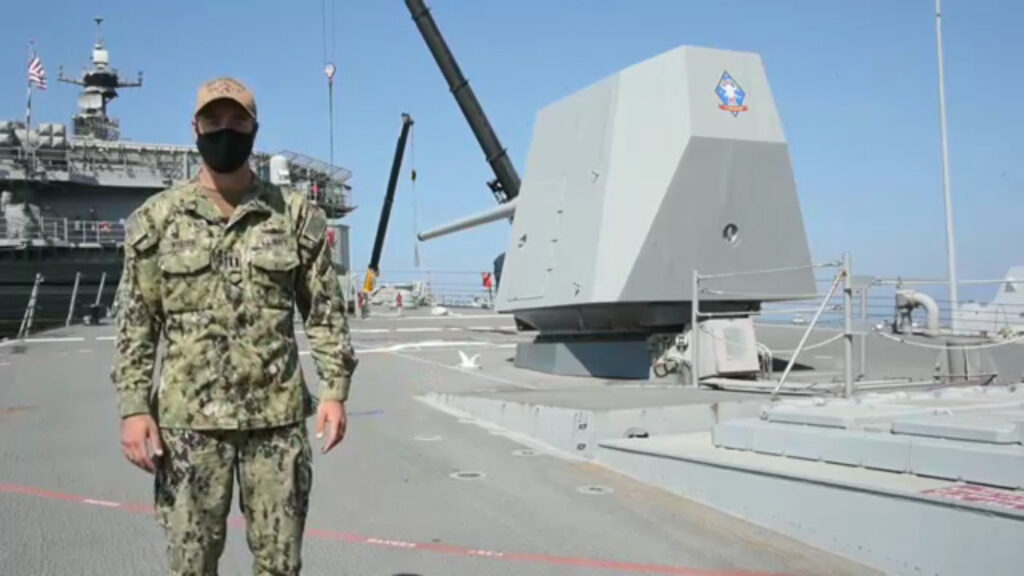 Not only is USS Howard an intricate network of rooms, passageways, and control centers, but it is also brimming with history. The ship was named after First Sergeant Jimmie Howard, who was a first recon Marine. Howard led a platoon of eighteen during the Vietnam War in the Battle of Hillfoyade in June of 1966. He and his men fought an entire battalion and six members were ultimately killed. President Lyndon Johnson presented Howard with the Medal of Honor, and in 1993 he was laid to rest at Fort Rosecrans National Cemetery after 27 years of service in the Marines. 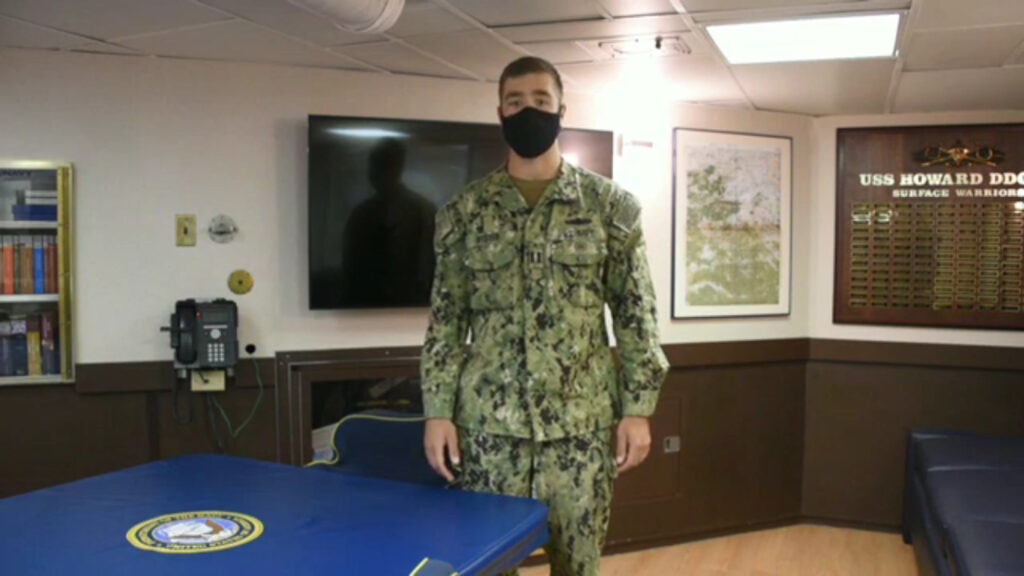 Following the featured video presentation of USS Howard, KCMS hosted special guest Commander Keith Heyen of Naval Base Coronado. As a husband of a CMS staff member and father to a CMS student, Commander Heyen understands firsthand the sacrifices and hardships military personnel must make.

“2020 has been an unprecedented and abnormal year. What I have learned this year, however, is that we should never underestimate the adaptability and flexibility of the American people, including our inspiring CMS students. I am constantly awestruck by your ability to roll with the punches, persevere through the unknown, and continue to live and learn in the face of constant unpredictability,” Commander Heyen shared.

With 19 years of service and the experiences of traveling to 44 different countries, Commander Heyen is a true example of a military hero. He joined the Navy because of four reasons: inspiration from his family, the desire to serve his country, the yearn to fly, and the wish to travel outside of his hometown Nebraska.

Jim Fabiszak is a retired Navy commander and father to five children. His desire to fly and service his country pushed him to excel at the Naval Academy for four years. He became a Navy midshipman in 1991 and eventually served a total of 24 years of active duty in the military. With numerous deployments all around the world, Fabiszak’s favorite was in northern Europe, where he had the opportunity to travel to Iceland and Norway. Retiring in August 31 of 2019, Fabiszak misses the camaraderie of shipmates and sailors and flying aircraft most.

“Veterans Day means a lot to me especially because I have a dad that is retired from the Navy. Many that join the military have to go a long time without seeing family or friends, missing holidays, birthdays, and other important events. Also, some members don’t have the opportunity to come back home sadly. Veterans Day allows a day of celebrating all those who fought or are still fighting for freedom,” Hannah Fabiszak shared.

The broadcast ended with words of appreciation from all of CMS to veterans and active duty military who seek to make the world a better place.

Eighth grader Claire Hickey explained, “It was really cool to get to see and hear about our veterans and all the work they do for our country on a daily basis. It was weird not doing the large celebration we always do, but we learned to adapt, as we have with many things this year.” 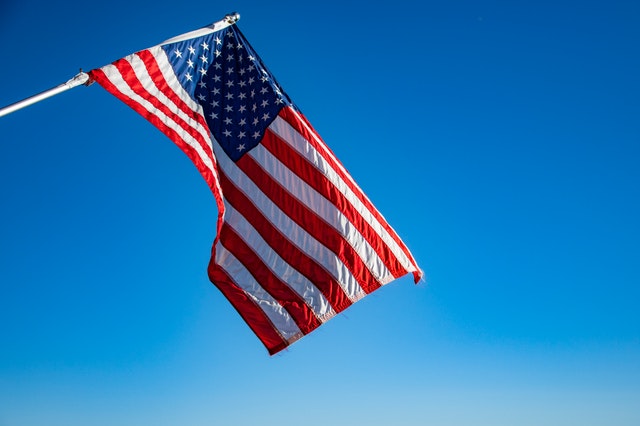 “It may not have been the Take a Vet to School Day extravaganza that we enjoy putting together annually, but Mrs. Evenson and the KCMS students did an outstanding job in allowing us to share our thanks and appreciation for the service and sacrifice of our nation’s brave men and women,” Principal Mellina concluded.

November 11 is a day for all to commemorate and appreciate the sacrifices and service military personnel have given to America. Although CMS’s once grandiose observance was celebrated differently this year, America still remains the “land of the free” and the “home of the brave” due to the duty, honor, and commitment by our military veterans and active duty service members.

The information below is provided weekly from the Coronado Police Department and then summarized for publication. Crimes Reported: Grand Theft at Boat Ramp on Strand WayVictim...
Read more

The information below is provided weekly from the Coronado Police Department and then summarized for publication. Crimes Reported: Petty Theft on G AvenueVictim reported unlocked bike...
Read more
Education

After a first semester of trials and tribulations, I was elated to step foot on Coronado High School (CHS) grounds for the first time...
Read more
Crime

The information below is provided weekly from the Coronado Police Department and then summarized for publication. Crimes Reported: Petty Theft on Soledad PlaceVictim reported items, including...
Read more
Advertisement
Sponsored Partner Links