It’s been almost two weeks since I left Coronado to head up north in my 20 year old Eurovan camper, and time has really flown by. After dropping off Bhumi the labradoodle in Coronado and making a few repairs, I hit the road again. I’ve been staying in the Eastern Sierra Nevadas, and in many ways it’s starting to feel like home here. This area is filled with pristine lakes, incredible mountain peaks and dark starry nights. Even though I’ve only been here for two weeks I still feel like there’s so much to explore. Not everyday has been spent sitting by a nice lake though, and going from living in Coronado to living in a van continues to be a huge adjustment.

Being out here makes you realize what you actually need to feel comfortable. I got used to not having a television or air conditioning in no time, but living without a bathroom or a good wifi connection has been an adjustment to say the least. While the lack of wifi may not sound like a big deal, it becomes an issue when freelance work requires you to be online. To remedy this, I’ve had to find wifi cafes with outdoor seating, and will often spend full days there to take care of everything I need to get done online.

If there’s one comfort I miss the most, it would have to be hot showers. When I was back in Coronado, I would wake up every single morning and take a nice shower to start my day. Out here, however, I have to rely on a shower bag that only gets slightly warm at best. I’ve gotten used to taking cold showers quickly, but I still miss having a hot shower from time to time.

Where have I been staying?

Most campgrounds around here can run $20 to $30 per night, meaning that I would run out of money pretty quickly if I stayed at one. Luckily for both me and anyone else traveling the country, there’s Bureau of Land Management land all around Mammoth Lakes.

You are actually allowed to stay on this land for free for a period of time, which is where I’ve been staying so far. While this land certainly has less amenities when compared to an established campground (no bathrooms, showers or other facilities), it’s less crowded and free. When I first arrived here I stayed near Hot Creek again, but soon moved to an area near June Lake. If you’re thinking about embarking on your own adventure in a van, camper or even a tent, there are several free websites you can use to find free camping areas. 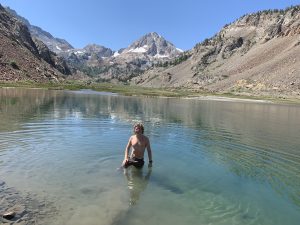 While climbing up mountains, swimming in cold lakes and running on trails out here, it’s easy to forget that a pandemic is still ravaging our country. Whenever I go back into Mammoth Lakes, I’m instantly reminded of COVID-19. Much to my surprise this area is actually more crowded than normal. The majority of people here seem to be from San Diego and Los Angeles, likely trying to escape the monotony of quarantine by getting outside.

I’m glad that more and more people have been hitting the road to explore the great outdoors, but hope that the influx of new travelers won’t lead to outbreaks in rural communities.

In a few days I’ll be heading up north to explore Oregon. While I don’t have many set plans, I do plan to climb Mt. St. Helens on August 13th and will be slowly making my way up there for that event. If you know of any good spots to check out in Oregon, please let me know! 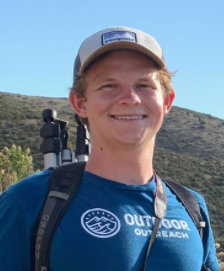 Packing For Your Visit To Coronado