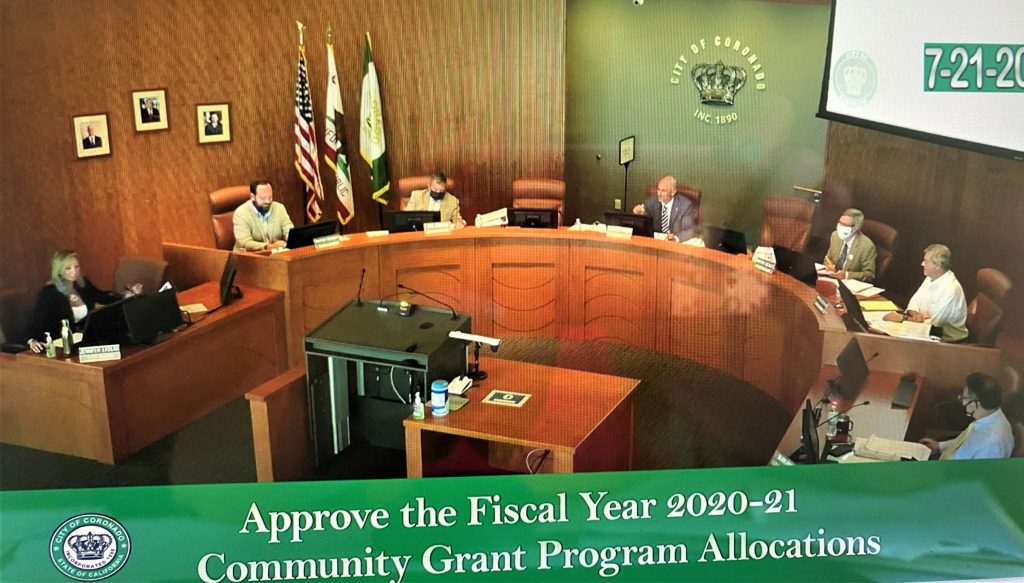 Awarding Community Grants was the main focus on the July 21 Coronado City Council meeting. There were 104 public comments submitted in advance, with 102 of those advocating for community grant money for various organizations. Thirteen out of the 16 local organizations requesting money called in during the meeting and most were heard with little technical difficulties. Assistant to the City Manager Dominique Albrecht and Senior Management Analyst Kelly Purvis presented the process that is used to determine community grant requests. There was much back and forth discussion among the council with Councilmember Sandke commenting, “With all the money the city has used up this year, we can’t meet everyone’s wish list.” Everyone praised city staff for their work on this difficult task. The city received $1,355,598 in requests, significantly exceeding the available budgeted amount of $800,000 by $555,598. A major challenge was that 95 percent, or $759,000, of the $800,000 allocated budget was requested by just three organizations, the Coronado Historical Association, Coronado SAFE, and the Chamber of Commerce.

Based on previous recommendations from the council, the requests were divided into four community elements:  Arts and Culture, Community Pride, Economic Development, and Social Services. Then staff went through a five-step process to determine funding allocations.

An amount to be given to each organization was determined leaving an additional $58,891 for the council’s discretion. Councilmember Benzian acknowledged that this is always a hard process and said it was important to look at what is essential right now and outlined his top organizations. Councilmember Heinze came prepared with a list of cuts and additions. Councilmember Donovan pointed out that it was important to look at each program’s survivability and had a variety of recommendations. After much back and forth dialogue, Mayor Bailey praised city staff for their outstanding work and looked to create a consensus. Ultimately, the council unanimously approved the Community Grant list shown here. 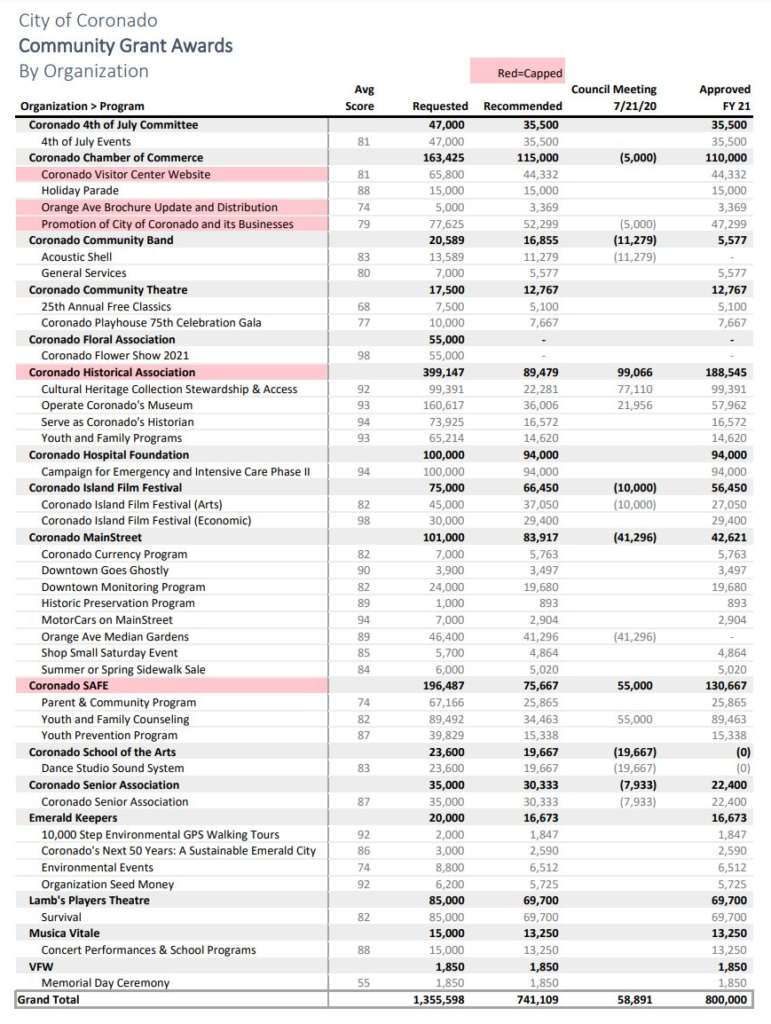 City Manager Blair King reported that last weekend’s Spreckels Park Outdoor Dining Room was a success with more than 120 people participating throughout the three days. The City will be hosting it again this weekend. King thanked the Parks and Recreation Department and Kelly Purvis for helping to coordinate this picnic-type event that encourages residents to get takeout food from local restaurants. 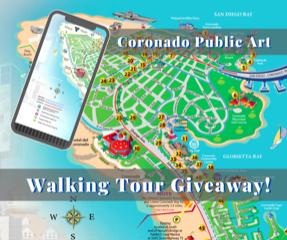 Councilmember Donovan thanked Joshua Tyler for creating the Public Art Walking Tour App for the Cultural Arts Commission. His grandfather Jeff Tyler, former chairman of the Coronado Cultural Arts Commission, gave a brief overview of the new app which highlights the more than 70 pieces in the current collection. This idea has been on the commission’s radar since 2017 but would have cost several thousand dollars. Joshua volunteered to develop the app at no cost, with volunteers and staff helping to provide content. This free app is available to download for iPhone and Android and can be found by searching Coronado Public Art. The Cultural Arts Commission is hosting a contest offering prizes for people who take the tour and post three or more selfies with public art on the Walking Tour Giveaway Facebook page before August 1.

Director of Public Services and Engineering Cliff Maurer gave a presentation on how parking in Coronado will soon be free. He noted that the current IPS Group parking smart meters being used in the city have never performed as promised and are unreliable, requiring high rates of repair with many complaints. The proposed adoption of License Plate Recognition (LPR) technology for compliance and enforcement for the 500 curbside parking spaces on the north end of Orange Avenue and the main Orange Avenue corridor would maximize parking space turnover, be cost-effective and convenient for residents. Functionality and beautification of sidewalks will also be improved with the current meters removed. LPR technology has no fee for parking within the time limits initially, but kiosks can be added later.  CPD Public Safety Officers would drive areas on a schedule during enforcement hours, with the LPR equipment reading license plates and recording time-stamped, curbside, vehicle information. Citations can be generated from the officers’ handheld device, with the information archived. Maurer pointed out that this has been used with high reliability in cities like Aspen, CO, Santa Cruz, Berkeley, Carmel, and Petaluma. He said the initial revenue loss to the city is minimal with currently only charging 25 cents per hour for parking. Two readers, at $55,000 each, will be purchased after the IPS contract expires in November, and then the fine amount revenue will be documented to determine if kiosks will be installed in the future. 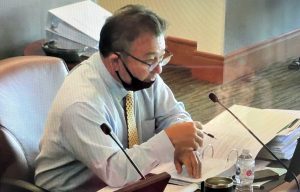 City Manager King gave a brief overview of the city seal, logos and other symbols that are being used by merchants and other entities without permission. He pointed out that because municipal governments can’t trademark their seals and logos, the city could amend the City Ordinance to better control usage. He said that because University Blanket and Flag Corp. was involved in the development years ago, they would have a no fee license agreement to use city symbols. The council unanimously authorized this and then Councilmember Sandke had to recuse himself for the second motion on this subject because of his affiliation with The Del. The council also approved allowing the Hotel del Coronado to use continue to use city symbols.

Associate Planner Tricia Olsen gave an overview on the request for a historic alteration permit for a remodel and addition at 1045 Loma Avenue, which the Council unanimously approved.

There were a number of Consent Calendar Items of Note:

The City of Coronado invites the community to attend a very special Avenue of Heroes Banner Dedication Ceremony, which will be held “virtually” on...
Read more
City of Coronado

“I want to wake up the people of Coronado,” emphasizes long-time resident Kirk Horvath, who has been a write-in candidate for mayor for...
Read more
City of Coronado

Editor’s Note: Thank you to the Coronado Shores Community Alliance Group for conducting this virtual Q&A forum and for sharing their video with the...
Read more
City of Coronado

https://youtu.be/bcoVrwyV5EgCoronado residents may soon see a demonstration project for the San Diego-Coronado Bridge Lighting project. Find out when and what to expect in the...
Read more
City of Coronado

Community engagement and communication are important values to the City of Coronado. To further involve residents, the City has launched Comment Coronado, an online...
Read more
City of Coronado

Reaching far beyond Coronado, John Diedrich Spreckels greatly influenced the growth of San Diego at the end of the 19th and beginning of the...
Read more
Community News

Community Gives Thanks to Coronado Police and Fire Departments

It's always nice to feel appreciated. And it's also nice to be the giver of appreciation. Dozens of community members and businesses came together...
Read more
People

Travel is an adventure and a way of life for 34-year Coronado resident Cyndee DuMontier and her husband Tom, who has lived here for...
Read more
Business

Jo Stretch Brings the Benefits of Stretching to Coronado

Get ready to feel renewed, with less aches and pains, after a visit to Jo Stretch, soon to be open at 1010 C Avenue,...
Read more
People

“I want to wake up the people of Coronado,” emphasizes long-time resident Kirk Horvath, who has been a write-in candidate for mayor for...
Read more
Education

Today, we enter into Phase 3 of our CUSD reopening plan and enthusiastically welcome new cohorts of students back on campus at both CMS...
Read more
City of Coronado

For years San Diego County has been the premier hub for prep baseball in the United States, producing historic names such as Ted Williams,...
Read more