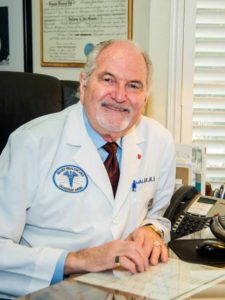 On May 9, 2020, Coronado lost one of its Guardian Angels, the beloved family physician, Donald M. Dill, M.D. He died peacefully at the age of 87 after spending 60 years in Coronado, serving his community through a lengthy career as a primary care physician and various leadership roles at Sharp Coronado Hospital.

Dr. Dill, fondly referred to as “Dr. D” at Sharp Coronado, was respected and adored by all who had the honor to meet him. He grew up in Ohio and graduated from Jefferson Medical School in Philadelphia, PA. He served the Navy as a Flight Surgeon Lieutenant, bringing him and his family to Coronado in 1960. After serving his country, he joined a family practice in Coronado, delivering babies and making house calls in the local community. If you grew up in Coronado, you likely know Dr. Dill as a Coronado legend.

He joined the Medical Staff at Sharp Coronado in August 1960 and remained on staff as an Honorary Member after his retirement in 2016. Throughout Dr. Dill’s 56 year long tenure, he held a variety of leadership and volunteer positions, including multiple times serving as Chief of Staff, member of the Hospital’s Quality Council, Hospital Board Chair and Foundation Board Chair. In 2007, he was elected by hospital employees as Physician of the Year. In 2002, Dr. Dill and his wife, Christine Gordon-Dill, were honored at the Foundation’s Annual Grande Ball, and again in 2016 at the Black and White Gala, for his decades of service.

Dr. Dill dedicated his life to the care of others and was a loyal and generous supporter of Coronado Hospital Foundation. In the late 1980s, Dr. Dill advocated for the creation of the Motion Center (now known as the Sewall Healthy Living Center), providing a space for community members and patients to maintain their physical well-being. Dr. Dill’s idea of incorporating preventative health into the hospital setting was visionary for that time and speaks to his integrative and sophisticated knowledge of health care.

Marcia Hall, former CEO of Sharp Coronado Hospital, remembers Dr. Dill with fondness. “He was ever wise and helpful. He had a grip on medicine that was evident in his many years as a primary care physician. Don Dill was a force, a leader, an excellent physician, and a good friend. I will not very soon forget him, nor his impact on my own life and Sharp Coronado Hospital.”

Until the very end of his life, Dr. Dill remained deeply connected to the Coronado community with a passion for health care. He wanted to see Sharp Coronado Hospital thrive and he played an integral part in ensuring its future success. In 2017, he was quoted in a Sharp article saying “Health care is in a constant state of transition. It is important that we evolve too, and evolving requires change — something we are not always comfortable with; but I look at every challenge as an opportunity.”

Please join me in honoring the life and contributions of our dear Dr. Dill. His legacy will live on in Coronado, especially at Coronado Hospital. His wife, Christine, requests that in lieu of flowers, donations be made to Coronado Hospital Foundation.