Connecting with Communities in Nicaragua for 20 Years

Coronado Times writer Jennifer Velez and her family have been involved with community building trips to Nicaragua since 2005, as part of their friend's 20-year Developing Communities life changing mission. They recently returned from their fourth trip and she shares the progress and how the impact of helping others changes your perspective.

The kindness of strangers 20 years ago set into motion life changing improvements for a small community in Nicaragua that may have been otherwise forgotten. It all began when our friend Jake Scheideman took a trip around Central America after college. He fell ill and found himself and his newfound traveling buddy, Harry Smith, in the home of Jorge Tinoco located in the small junction town of Empalme de Boaco, which is located about an hour and a half from the capital city of Managua. Even without a common language, a friendship developed through a mutual love of baseball, and he promised to come back to help his new friends. After Hurricane Mitch in 1998, he returned to see how they had fared and discovered that their town had experienced devastation, including losing their beloved baseball field, one of the most important things in their community. Over the next four years, he raised money and returned with friends to build a baseball stadium large enough to host teams from the region. You may or may not know that baseball is ingrained in the fabric of Nicaraguan life, with soccer or “futbol” a distant second. 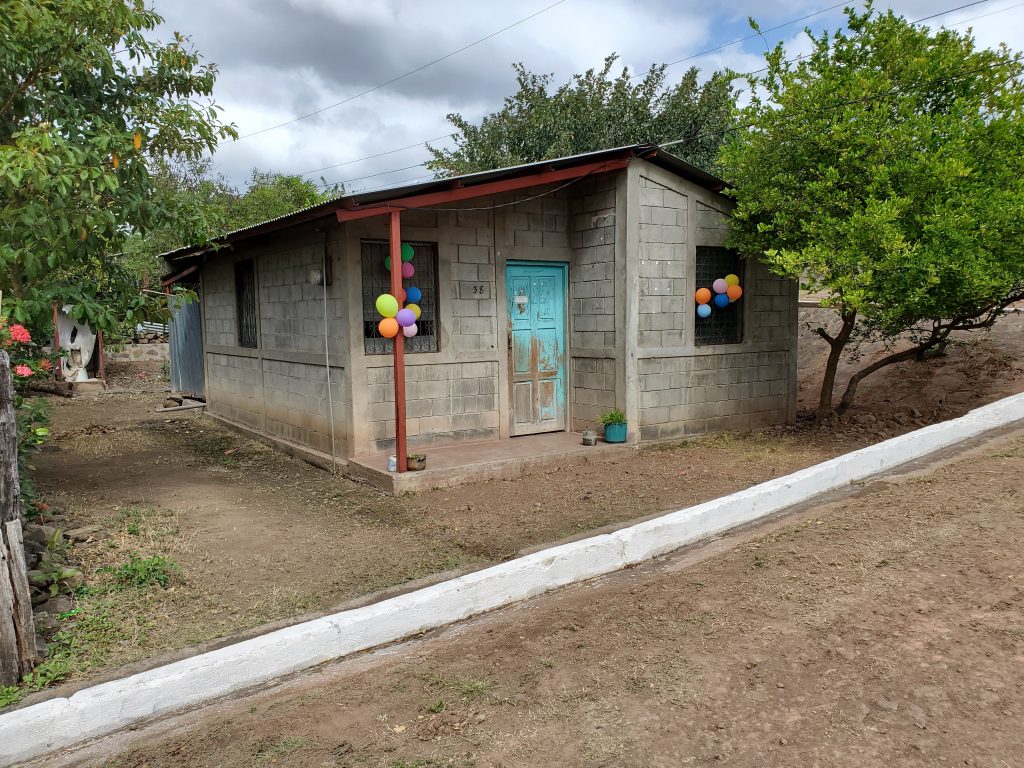 The needs didn’t stop there. Soon, a children’s playground was constructed nearby. The next most critical need was for housing and Jake and his foundation, Developing Communities, built 64 houses called Colonia Santa Helena, named because he and most of his group are from Northern California, where he owns two bike shops in Napa Valley. The housing project is truly life changing for these grateful people and Jake asked friends and business associates to sponsor the houses. After the monumental task of grading was completed, it took about three months to build each set of 10 houses, but then less than half an hour for families to move from their corrugated tin houses with no amenities to their new block homes with water and electricity. Jake’s tenacity and the hard work of volunteers and community members have made a tremendous impact with roads, sewers, health clinics, a high school, and a police station constructed, and a myriad of individuals who have been helped.

We heard about our friend’s passion project and decided to experience it firsthand in 2005, when we traveled with our two children, Tyler and Cassandra, and a small group of people to help construct a kitchen at the local elementary school. This allowed the children’s lunches to be prepared on site rather than having parents’ haul the rice and beans, provided by the government, to and from their homes each day to cook meals. For some kids, this is their only meal of the day. Our group was also able to deliver some needed school supplies and baseball and other athletic equipment. My kids, who were 13 and 9 at the time, only spoke a few words of Spanish, but that didn’t matter because the language of kids is universal, and they made friends immediately by sharing bubbles.

On the first trip, more than 100 children followed us and begged us not to forget them and to come back and bring more bubbles. They even wrote their names in a notebook so that we wouldn’t forget them. Little did they realize that they will forever be in our hearts and they have changed the way we look at the big and little things each day. Every trip is a reminder of how much we have and how little effort it takes to share in our local community or around the world. It’s the simple things like an old suitcase sitting in the attic, which becomes a dresser to keep clothes clean in a corrugated shack with dirt floors.

We have returned several more times, once to help open the new high school named the Instituto Lauralee Scheideman, after Jake’s mom, and again to build “La Casita Azul” a complete little blue house constructed in just one week for the designated town grandmother Doña Canda. Watch the documentary made on this magical building experience: https://vimeo.com/253824928

It is always a joy to spend time with our Nicaraguan friends, but every time we go, the needs are many and our resources seem too few.

Of the more than 200 volunteers who have gone on numerous trips through the years, 28 volunteers signed on for this adventure in late January 2020, with some new faces, for this celebration of 20 years of improvements in the community. Every trip starts with a warm welcome at the airport as a large truck filled with people from Empalme de Boaco come to greet guests at the airport. It continues when you arrive in town and are escorted down the streets serenaded by a band, complete with fireworks, from the Tinoco home, where it all began, to the beloved Tinoco Baseball Stadium that bears the family name.

Our projects on this most recent trip included repairing the electrical system at the high school and replacing hundreds of light bulbs, as well as painting the interior and exterior, and spearheading a garden project that will provide fruits and vegetables to supplement the rice and beans for the elementary kids’ school lunches. We also focused on revitalizing and painting their beloved baseball stadium, which is a great source of community pride. Jake also advocates for passing it on and encourages the communities that he helps to support other places in need, so for example an outlying baseball backstop and a school roof in other towns were painted. We also had a dinner and dance, where the whole town turned out to celebrate, and three of the kids in our group, Finley, Paxton, and Josephine, hosted impromptu origami classes for the many students and connected through the kids’ universal language all week.

We had the privilege of meeting this year’s scholarship recipients and learn about their progress. Over the course of 15 years, dozens of students have been given additional opportunities to go on to college and become doctors, nurses and other professionals. This wouldn’t have been possible without the scholarships provided by Developing Communities, where less than $500 a year per student makes all the difference. This program has allowed students to dream bigger than they ever imagined and attain new possibilities. In a country where the average wage is $7 a day, if you can find work, this is life changing for families.

Things move at a slower pace there and patience is required for the very worthwhile end results. You can’t just run to Home Depot to get supplies. For example, light bulbs had to be brought from Managua, and if you wanted clean fill dirt, you took some people in a truck to the river an hour away to fill up bags with good soil and then return.

Between painting and planting, we took a few hours to visit other communities like Ojo de Agua where we enjoyed the privilege of learning to make the most scrumptious pineapple pastries and cake with Doña Carmen in the most primitive conditions. We even had the honor of having Marvin Benard, a Nicaraguan and former San Francisco Giants player, come to have lunch with us and meet the baseball teams to which he is a hero. The great thing about his visit was that it wasn’t planned! Serendipity took hold when Marvin happened to be on the same flight as Jake and the group as Marvin was beginning a three-month stint to coach the Nicaraguan National baseball team. Previous contact with him was 18 years prior when he donated old baseball equipment and was featured in a CBS television story https://vimeo.com/259100523 on the building of the baseball stadium. 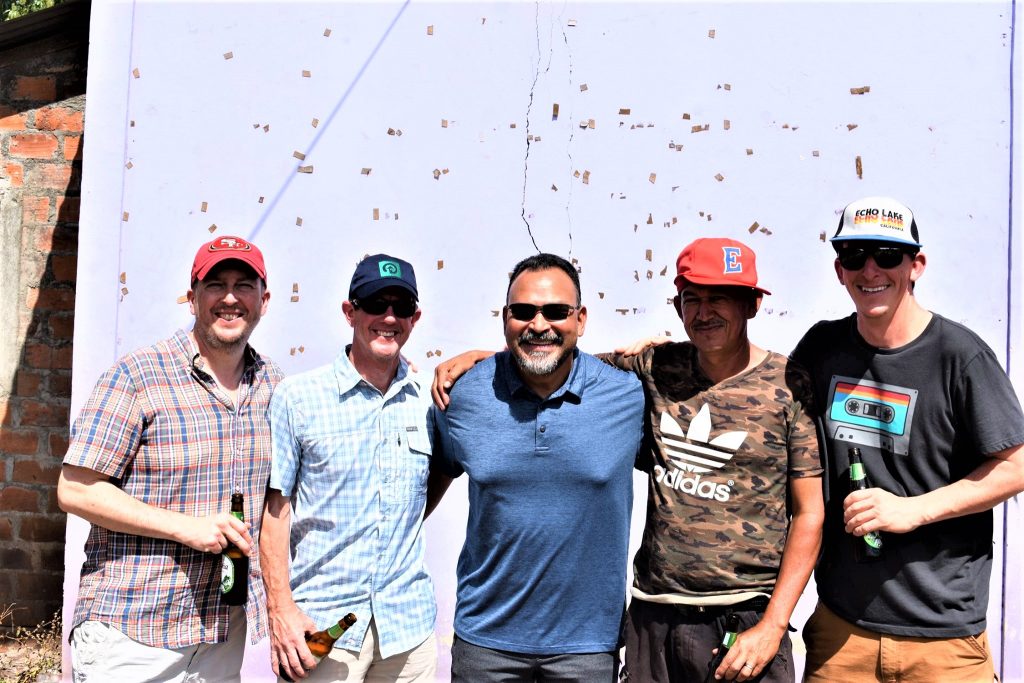 It’s easy to get caught up in the routines of everyday life, but it’s nice when you can find an outlet to look beyond yourself and find ways to help others, whether it be in the local community or in other parts of the world. Our perspective has changed since our first trip, when we set out on a journey to a country that we knew little about, to a small town in the middle of nowhere.  We are thankful that our friend Jake and his daughter Amanda, who are ingrained in this community, connected us to the most caring, appreciative people who have touched the depth of our souls and impacted us every trip and whose faces we will never forget. We carry them in our hearts and remember the simplest things mean so much.

Many of you participate in local blanket drives, church projects, Tijuana orphanages and many other mission-oriented activities and the difference that you are making is a positive step to helping the world become a better place.   To learn more about our project, check out www.developingcommunities.org

Coronado Unified School District (CUSD) employee Donald Walton passed away on December 21, 2020 from cancer at the age of 59. Lovingly known as...
Read more