Costa Azul will be opening at Ferry Landing, located at 1201 1st Street.

The closure of locally owned restaurant Costa Azul was devastating to many last year. While Brant Sarber did everything he could to keep it open, such as embracing the Stay of Execution, ultimately the lease would be extended to The Henry Coronado. Costa Azul shut its doors just over a year ago in August 2018.

On the opposite side of Coronado there were challenges at the Ferry Landing in a large restaurant space with windows overlooking the bay. After ten years, Candelas on the Bay mysteriously closed in January 2018. In May 2018, Blue Bridge Hospitality stepped up to manage the restaurant. Re-branded in August 2018 came El Roy’s, which closed suddenly in May 2019. One of the most prominent spaces in Coronado was left to sit vacant during the busy summer months with passersby scratching their heads.

What to Expect Next

What many locals may consider a miracle, is actually the hard work and dedication of Brant Sarber. Brant is on a mission to resurrect Costa Azul in the vacant Ferry Landing space. Touring the space, Brant explains his vision, “I have everything waist up from the old Costa: photos, mirrors, bringing the ambiance back. I want it to look and feel like Costa.” Brant shares that he is working with the Coronado Historical Society as well as the Coronado Library to secure old photos of Coronado for the space. The walls will be painted cottage white. In the outside space, he envisions games on the lower section- pool, corn hole, and ping pong are all possible contenders. On the upstairs patio his plan is to create a taco bar and utilize the bar space.

Not only will the new Costa Azula have a similar look, it will operate almost identically to before. Brant will be managing and his wife will be keeping the books and greeting customers. Leadership aside, there will be a lot of familiar faces, “I have had more employees than I ever thought calling and asking to come back. It goes to show how family-like it is here.” Additionally, Brant is already thinking ahead to bringing back the live music beginning with Tommy Harris and a Sunday Funday.

The other aspect that will stay the same is the menu and pricing. Brant explains, “We want this to be a place where you bring your family, have a bite, have fun. There will be no $20 burger, we will be having margarita specials, taco specials, draft beer.” Brant also promises to continue to have local beers on draft. While the seating area in the new space is comparable to what it was in the Orange Avenue space, he walks through how the kitchen is double what they were used to; an advantage that not only helps Costa Azul, but can help sister-restaurant Island Pasta with their delivery needs as well.

While tourists are important to business, Brant commits to having locals be the focus, “It’s gonna be a local place. I need them here. I want it to feel like it’s old Coronado ‘Cheers’! It will be great for people to come and hang out, have a beer, see fireworks, stop by before taking the Ferry over to a Padres game. Ideally, it will be an anchor on the side of the Ferry Landing, like Il Fornaio is on the other side.”

Brant sets the timeline at about two to four months before opening. He kept his Costa Azul liquor license active, held on to much of the old Costa decor and equipment in storage, and with an eager staff, it is likely they could reopen before the end of the year.

Lingering questions remain- what happened, why is Costa in this position to begin with? Brant addresses speculation, “after what happened on that block [Kleege Sale], rent has been increasing everywhere and it’s hard for the little guy.” So how did he end up in one of the premier Coronado locations? He attributes some of the “how” to Coronado residents fighting back against the plans the port has for a possible hotel. The owners then approached Brant for a short term lease to have Costa Azul in the vacant space. He calls the landlords, “more than nice. They have been super supportive and helpful.” Assuring readers that they also want to “keep small business alive in Coronado.”

While Costa Azul in on a short term lease now, Brant is optimistic that the business will continue there for many years to come. He credits that belief to a Seaport Village precedent, “this happened in Seaport Village with the changes. Many of those business kept having their leases extended.”

The community response is overwhelming; Brant admits, “I’m humbled by the response. There are so many people- it’s amazing. I knew I had followers, but this is more than I ever would have thought. Everyone can’t wait- and I can’t wait to see them again! I want to say ‘hi’ to them and see them every day. It’s been so amazing. I think it’s because people want to keep Coronado that way it was- neighborly.”

Stay up to date by following Costa Azul on their Facebook page. 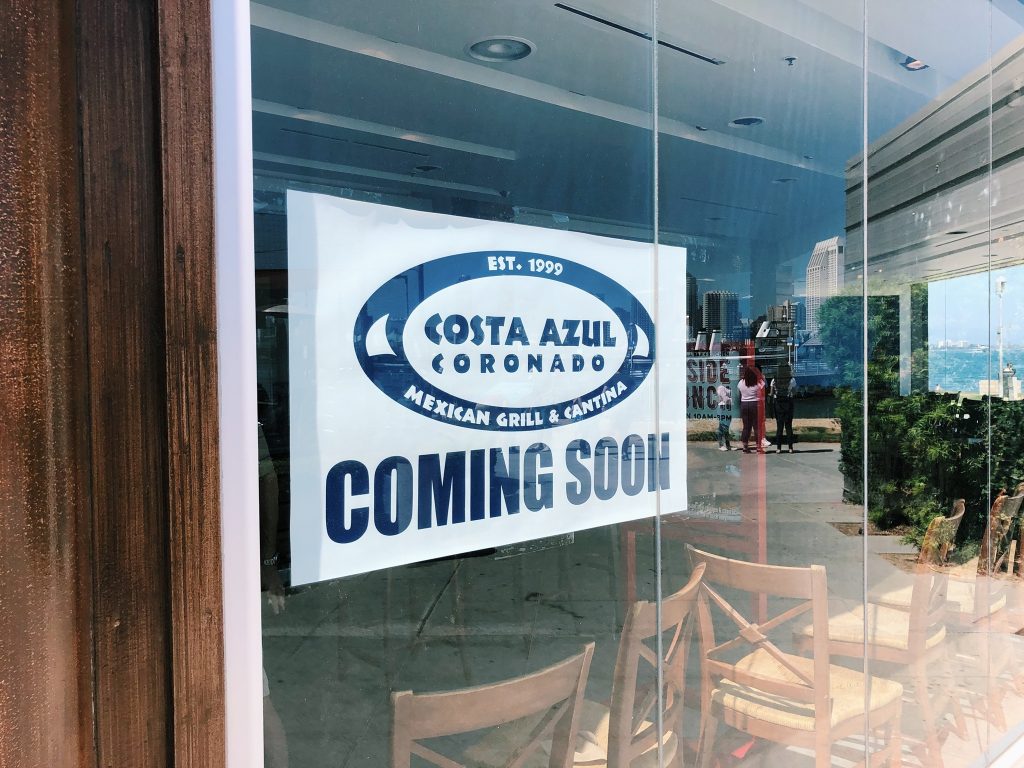 I’m not sure any of us truly understood how much we liked dining in restaurants until we were quarantined with stay at home orders...
Read more
Business

"Corona Virus might have us all working out at home but we’re still in this together. Vocals by Katleen Dugas, lyrics by Kim Russell,...
Read more
People