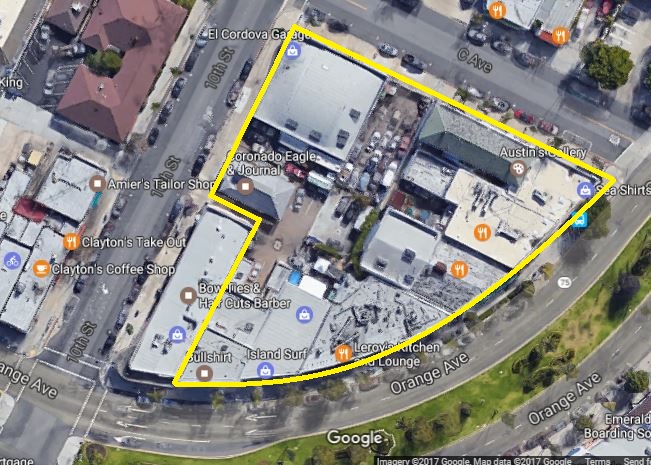 Kleege Enterprises (Kleege) spoke to The Coronado Times to share more about the next steps for its purchase of a major portion of downtown Coronado real estate. As we know, Island Surf is gone, El Cordova Garage is gone (at least from its location), and beyond that, Bruce Kleege, owner of the Coronado Assemblage, says: “Right now we are very happy with all the tenants and we hope they will all stay.”

The biggest news Kleege shared was that a new business is already slotted for the El Cordova Garage space. Kleege said that it will be a locally-owned, family-oriented restaurant. The Coronado Times is unable to share further details at this time per the new tenant and landlord.

Further, Kleege denied the fear that some residents have mentioned that there would be any attempt to demolish the building. Indeed, he said that “the character of the building itself” is of interest to the new tenant.

A few local business owners had speculated that a restaurant might be slated for the spot and mentioned that there could be serious clean-up issues since the location had been a gas station in a prior life. Kleege concurred that there would be a good deal of cleaning up that might take about a year to complete; and, he expects renovations as well. But, he went on to say that he expects the exteriors of all of the buildings (at least at this point) to remain the same.

If there were an overall theme of Kleege’s comments about his retail purchase in Coronado, it could be called, “It’s all about community.”

Kleege said that he initially purchased the property in Coronado and had an interest in it because he owns a home here. “Coronado has a special place for me … I wanted to help the community out by doing something special.”

As he began plans for the spaces, Kleege said he had one space that was open. He reached out to the tenants on the block and was delighted to hear that Bungalow 56 wanted to expand its space.

With that problem solved, Kleege focused on the El Cordova Garage. His feeling was that the business might be better suited to a location other than the center of town. He was hoping to find a business that would both allow him to clean up the interior area of the block, where the El Cordova Garage currently houses vehicles in various states of disrepair, and be popular enough to draw in foot traffic for the other businesses on the block that could increase their sales as well.

To figure out the best proposal for the location, Kleege turned to local brokers, Mike Moser and Jim Rhinehart, of Retail Insite. Again, Kleege said that he turned to local brokers because he felt that “you need to have an interest in Coronado if we are going to build something that all can appreciate.” Kleege credited the brokerage team with coming to him with the best proposal for the El Cordova site. Kleege felt that the family-oriented restaurant planned represented “something first class – that was the best we could get for the community – both for locals and for tourists. This new restaurant is going to be in high demand. We were impressed by both the new owner’s presentation and his commitment to the community.”

A large piece of the assemblage puzzle that remains outstanding is what will happen with Costa Azul. Kleege maintained that he is happy with all of the tenants, presumably Costa Azul included. At the same time, he noted that Costa Azul’s lease is up and that he has asked Brant Sarber, Costa Azul’s owner, to come back with a proposal for an expanded lease.

Kleege said he has not yet heard back from Brant, but has been getting “terrific proposals from other first-class restaurants.” He also said that he is “looking for someone with a connection to Coronado.” He noted that the Costa Azul site is very important because it holds such large frontage on Orange Avenue.

When approached, Brant said he wanted his customers to know that Costa Azul is in business and intends to stay in business. If customers would like to be supportive, they should come in, eat and support his restaurant. This was a similar sentiment to that shared by Bay Books in an earlier article. Brant’s main concern was that “I love Coronado with its small town feel and don’t want Orange Avenue to become a strip mall.” He made no comment on the issue of the proposal.

Because Kleege had remained silent for so long, there has been a lot of speculation and rumor voiced in the community and on social media. Likewise, residents have a number of legitimate fears. We asked Kleege to clear the air on a number of these.

Answer: Kleege denied that there would be any attempt to demolish the building. Indeed, he said that “the character of the building itself” is of interest to the new tenant. There would be renovations and a good deal of cleaning up, however, which Kleege estimated would take about a year. He went on to say that he expected the exteriors of all of the buildings (at least at this point) to remain the same.

Question: Will new businesses be primarily focused on tourist needs rather than those of locals?

Answer: “We have reached out to most of the current tenants and told them we are trying to create a plan and are interested in their input. … we are trying to keep a local flavor … But, all of the businesses feed off of tourist traffic. You can’t downplay that.”

Answer: “We have not increased anyone’s rent. We’ve done nothing to negatively impact their businesses … but rents will probably go up at some point.”

Question: There is a persistent rumor of a motel/hotel up top and shops down below. Is that a plan Kleege has considered?

Answer: According to Kleege, this is not the plan. For a variety of reasons, from zoning to parking, Kleege said it would be impractical.

Question: Is Kleege planning to favor non-local businesses over local ones (as the departure of Manny Granillo’s Island Surf might have caused people to fear)?

Answer: Kleege said that he had received notice from Manny that he was planning to end his lease, but appeared to not know that Manny had already emptied out the shop. However, he said, “it’s important to bring the community in” on decisions as to what to put into the empty spots. That is why, he said, he turned to tenants on the block of C to find a new tenant for the empty spot where Bungalow 56 expanded. He would hope that there would be another local business interested in the spot that Island Surf vacated.

Question: If it is important to bring the community in, will there be an open community forum for discussion of the changes?

Answer: Kleege said he didn’t feel that there was much use for this as the final plans are as yet unknown. “We are really working with what is existing.”

When asked to envision the future, Kleege said, “I don’t know what’s going to happen. If I close my eyes and dream, there might be a big open courtyard [in the center of the shops] with fun events, weddings, music at night. I’m not sure.”

Kleege ended by saying that he had paid a substantial price for the property and he “wouldn’t have done it without an interest in the community. Whatever we do, it will enhance everyone’s living experience.”

Editor’s Note: The author, Luan Troxel, has no association with the “Troxel Building” located at 10th Street and Orange Avenue that previously housed Troxel’s Hardware.