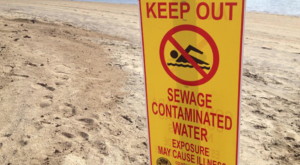 There was another spill in the Tijuana River from Mexico over the weekend. According to Ginger Sacco, of Citizens Against Sewage, who closely monitors the “flow” in the river, Mexican authorities notified the United States that the pump station had exceeded its capacity which had “resulted in flow of 665,000 gallons” at the border. Mexico cited ongoing electrical issues from Saturday evening into early Sunday morning.

This spill is notable for several reasons. First, the spill has happened in dry weather. Second, the Mexican authorities notified the U.S. quickly, which has become somewhat rare over recent months.

The dual sewage treatment plants along each side of the Tijuana River were built to treat the sewage from Tijuana and any overflow that might happen. Over the years, as the population of Tijuana has grown, the city has outgrown the plants’ capacity. That, along with crumbling infrastructure, has led to increasing numbers of spills in dry weather, as well as in wet weather, over recent years.

The San Diego County Health Department closed down the beaches in Imperial Beach as a precautionary measure.  Coronado beaches remain open at this time.

Rain is forecast for this week. That could serve to exacerbate the issue as we head into a holiday weekend. Remember to check the San Diego County Beach Closure website for updates on beach closures.

It Rained, Can I Go to the Beach?