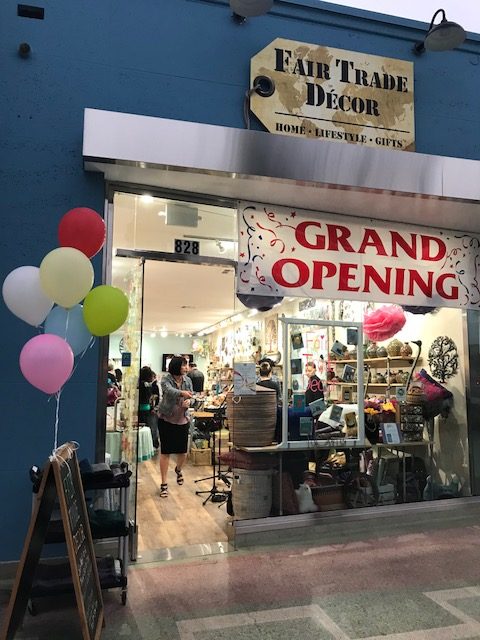 Fair Trade Décor had its much-anticipated Grand Opening and ribbon cutting on Friday evening. The store, which opened its Coronado location originally (and softly) on December 9 recently closed its Del Mar location “to really focus on Coronado,” co-owner, Elizabeth Paganelli, said. Kelly and Haley, who both work in the Coronado shop, said that so far, “turnout has been fantastic.”

The shop has a “fair trade” theme and promise. According to the Fair Trade Federation website, fair trade is “an approach to business and to development based on dialogue, transparency, and respect that seeks to create greater equity in the international trading…The Fair Trade Federation is a community of businesses committed to…work[ing] closely with small farmers and artisans to ensure good wages, safe working conditions, environmental responsibility, and economic growth.”

principles. Mary, who was visiting Coronado from Minnesota said, “When I first discovered the store, I came in and saw so many amazing things. Then I talked to the owner and she showed me these cards that tell you everything about each of the products, where they’re made and where they are from. With the concept of fair trade, how could you go wrong?”

Another shopper said, “It’s really neat. It has a lot of nice and different gift ideas. And, it supports communities.” In fact, the store has many offerings – housewares, children’s toys, pet supplies, jewelry, clothing, and more. Every time I turned around, I realized there was yet another thing that I hadn’t noticed before. The store is full of color, and ideas and lots of fun, even if just browsing.

Veronique and Aldo came to the grand opening to support the business because they have been clients at the Del Mar location for years. They said that they usually visited the Del Mar location 5 to 10 times per year and that they had been to the Coronado location three times already. Veronique said that she bought all of her Christmas gifts at Fair Trade Décor this year and that she was in the shop, not only to support her friends, the owners, but to buy a gift for her son’s girlfriend.

The grand opening event was a big and well-attended party. Several Coronado City Council members attended, including Mike Donovan and Carrie Downey. When asked what he thought of the place, Donovan said, “My wife loves the shop. She couldn’t come tonight, but she told me to come and tell the owner how much she loves it.” Downey said that it was her second time in the shop, which she described as “beautiful and so Coronado.” She added, “I hope the citizens realize it’s not a place just for tourists.” She said that she had found many things to put in her own home and to give as gifts.

Sue Gillingham, from the Coronado Chamber of Commerce, and Mayor Richard Bailey were both there to supply and cut the ceremonial ribbon. 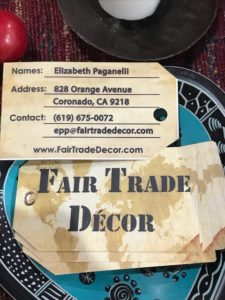 Elizabeth and Jude Paganelli, who own the shop, certainly know how to throw a party. Along with champagne and valentine-themed sweets, there was a cheese table. And, there was fabulous music from Lillian Le Franc (aka Alexis), a singer and song-writer in San Diego, as well as from Karina Frost and the Banduvloons.

As for how things are going so far from the point of view of Elizabeth and Jude, who also recently moved to Coronado, Elizabeth said, “We are humbled by the support we’ve received from the community.”