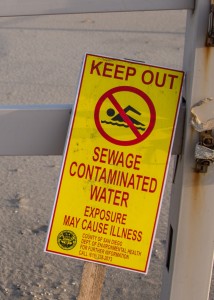 The City of Coronado has hired the firm Best Best and Krieger to represent it in the fight against cross-border sewage. Best Best and Krieger (BB&K) specializes in Environmental Law and has eight offices in California and Washington, D.C. It strives to “help our clients navigate the ever-changing regulatory, policy and legislative challenges they face. We give our clients a voice where it matters to help influence policy and secure the much-needed and scarce funding that allows progress to happen.” The City’s goal in retaining the firm is to lobby politicians in California, Washington D.C., and potentially in Mexico City to effect change on the cross-border sewage crisis.

Coronado City Council Member Whitney Benzian says, “We all agree on the facts… No one is denying this [cross border sewage] is happening. The question is, how do you bring [it] to the attention of a broader group?” As it turns out, different cities are trying different tacks.

Last fall, the City of Imperial Beach, under the guidance of its mayor, Serge Dedina, sent a letter of intent to sue the International Boundary and Water Commission for violations of the Clean Water Act. At the time, many in Coronado asked whether the City of Coronado would join the suit. Other cities and entities did join, including National City, Chula Vista, San Diego and the Port of San Diego. But, Coronado instead offered to support the suit with funds of up to $50,000. According to Benzian, “We could have joined the suit… and we do support them… But, suing the government is a tough road. So, we said, ‘what else can we do?’ We all kind of realized that we need to deal with Scott Pruitt and the EPA [Environmental Protection Agency]. Suing him is not going to make him like you more or help you more… So, with our counsel, we decided it made sense to follow a different strategy – [to negotiate] rather than to sue.”

A number of activists and citizens took to social media after the decision to support the suit with funding only and argued that the City of Coronado was simply trying to keep its name unassociated with the sewage crisis in order to maintain tourism. Benzian took issue with this point of view as being illogical – who would want tourists to get sick? Instead, Benzian says that Coronado is simply taking a different approach: “When you are negotiating and meeting with people, they are not going to give you information if you are suing them. They aren’t going to be on your team, you’re inherently an opponent. The spirit of that is not what we want to do. We want to work collaboratively and cooperatively to solve this… we think our course of action might have a better chance of being effective.”

The main goal is to get the attention of politicians who otherwise don’t have southern California or Imperial Beach on their radar. Benzian says, “Scott Peters and Juan Vargas know all about this. But they are Democrats in a Republican controlled congress and they are not getting the attention they need. What we want to do by using BB&K is set up meetings with powerful, influential congressmen from other districts and in other states. We want this piece of information to be there when they start negotiating NAFTA again… It is a feasible negotiating tool.”

The lawyer who will be working most closely with the Coronado City Council is Andre Monette, partner in BB&K’s Washington D.C. office. Monette might be the perfect choice to represent the City of Coronado. His work significantly involves issues regarding the Federal Clean Water Act. And, he received his undergraduate education in Marine Geology from San Diego State University. According to Benzian, he also graduated from Coronado High School.

Benzian says that, at this point, Coronado’s spending on the law firm is capped at $100,000. “That’s a lot of money. But, this is also a really important issue.”

Indeed. This is an international issue (involving the U.S. and Mexico), an international security issue (as it could impact SEAL training), a border security issue (as border patrol agents have been harmed by the pollution), and an issue of human and marine mammal health, and ocean health. It is a broader ecology issue as well, given its impact on the important Tijuana River Estuary.  And, of course, it’s not just a problem of cross-border sewage – there are also industrial pollutants and everyday garbage, such as tires and plastics, that get thrown into the Tijuana River.

In response to those who say this is a Mexico problem and Mexico should deal with it, Benzian replies, “It’s our problem even if it’s Mexico’s problem.”

Related:  It Rained, Can I Go to the Beach?