The Coronado Times recently reported that the City of Coronado has hired a Washington, D.C. law firm to represent it in lobbying legislators in an attempt to impact legislation and funding on the cross-border pollution problem. This somewhat conservative action stands in contrast to Imperial Beach’s earlier one of sending a notice of intent to sue the federal government for not upholding provisions of the Clean Water and Resource Conservation and Recovery Acts.

We interviewed Imperial Beach’s Mayor, Serge Dedina, to discuss why Imperial Beach chose to take what might seem to be the drastic action of suing the U.S. government as well as to tell us where that lawsuit currently stands.

Dedina’s first comment was to point out that, given the severity of the pollution of the river and beaches, the action of suing the government is not what is drastic – it is the problem itself that is drastic.

Through our conversation, however, Dedina laid out a number of factors that led to the lawsuit, including: the severity of the problem; the recognition that while there was little accountability on the Mexico side of the border, there was also a serious lack of accountability on the U.S. side; the realization that nothing appeared to be getting done otherwise.

The Severity of the Problem

The cross-border pollution problem is not new. Mayor Dedina said, “Everything we’re saying now is nothing new … we’ve been talking about nonstop discharges of toxic waste and especially sewage and trash for the last ten years.” But the problem of pollution came to a serious turning point in February of last year when there was a massive sewage spill – over 200 million gallons of raw sewage was dumped into the Tijuana River by Mexico. No warning was given and it flowed freely down the river, exiting through the Tijuana Estuary and into the ocean in Imperial Beach.

At that time, much noise was made by the city of Imperial Beach as well as by various environmental groups, individual citizens and multiple news outlets. And, one might have expected that something would be done. However, since that time, the sewage has continued to flow.

In fact, Gabriela Torres, the Policy Coordinator for the Surfrider Foundation’s No Border Sewage Program, spoke at yesterday’s Coronado City Council meeting and pointed out that there have been “25 additional spills since then.” 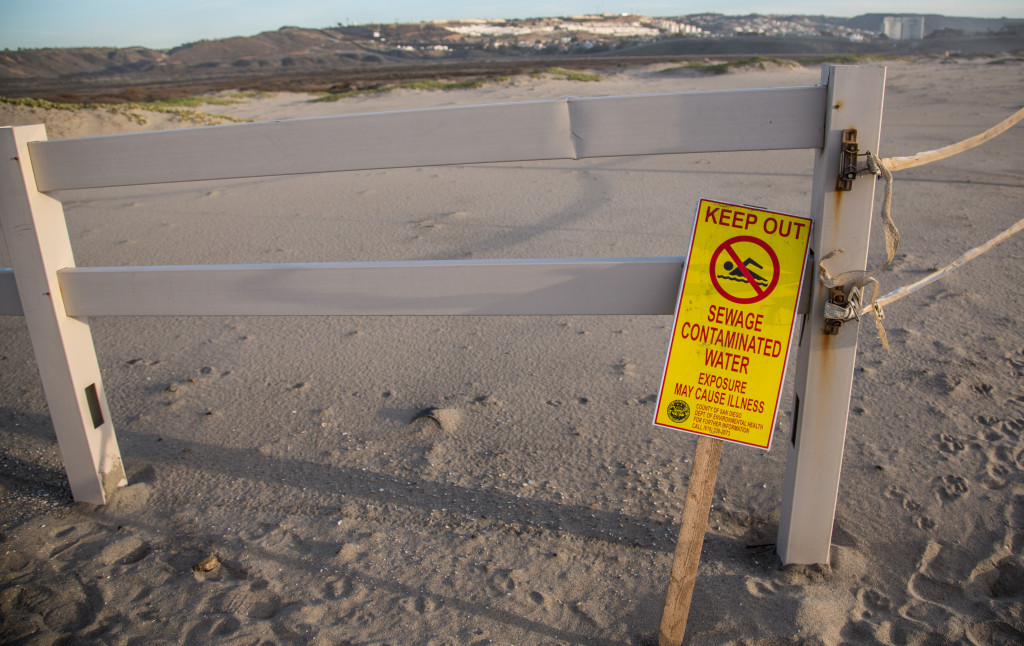 The problem is not just one that occurs when it rains. According to Dedina, “The mythology is that this is a wet weather problem. The reality is you have up to 25 million gallons a day of what is mostly raw sewage in that river that are being sucked out by a pump station (which is the only reason it’s not reaching the beach every day) and when that breaks down, which it does all the time, we have this constant stream of extensive amounts of sewage flowing into the river valley and going into the ocean itself.”

The impact on Imperial Beach has been especially severe – its beaches have been closed about a third of the time over the last ten years. And, this has reverberations across the city from beach-focused businesses to real estate to the town’s sense of community.

Dedina said that accountability for Tijuana’s sewage system clearly resides in Mexico: “Mexican authorities have responsibility to fix their sewer system. There’s no other city in Mexico where they are allowed to do this.” At the same time, the United States is responsible for managing the relationship with Mexico regarding sewage (which is how the International Boundary and Water Commission is supposed to function) and for providing back-up systems on this side of the border when there is failure on the other side.

Dedina said, “Tijuana has old infrastructure that’s not well maintained and there are no protocols for their management. So, at the end of the day if a pump station breaks down and they discharge 200 million or 250 million gallons of sewage in the river, like they did the other day, there are no repercussions. No one loses their job, no goes to jail, no fines are paid … There’s no oversight. There’s no transparency. There’s no accountability. The assumption was, ‘well that’s on the Mexican side of the border.’ What we found is that ultimately, there’s a whole accountability structure built into the US side of the border vis a vis the Clean Water Act and they [U.S. authorities] are not complying with federal law.”

Nothing Was Going to Get Done

While we might have expected an immediate and concerted response following the large spill in February of 2017, Dedina said, “The response was literally three words: Everything is fine. We have it under control.”

Dedina attributes the lack of a response not to indifference, but to a focus on private, rather than public interest: “It’s very clear to me that the interest of the IBWC is approving a desalinization plant in Rosarito Beach. So, they are very focused on private interests. They’re not focused on public interests … The problem with all this bad behavior going on is, instead of U.S. agencies making sure they didn’t happen, they just made excuses and covered them up. That’s why we are where we are today.”

When we asked if there was anything the government might do or might have done to avert the suit, Dedina said that the City would not have filed a notice to sue if there had been recognition of the problem and a plan to fix it. “If we had had assurances from the IBWC and the US EPA [Environmental Protection Agency] and other agencies that are in charge of the border that they were going to fix the problem on the Mexican side of the border or help fix it on the Mexican and the US side of the border, we wouldn’t have [planned to] file the lawsuit. But what we’ve heard always is ‘be patient and everything is fine, don’t worry about it’ … There’s no evidence that they are doing anything, no evidence that they want to do anything, and it’s clear to us that they have no intention of doing anything.”

Dedina said, “We ARE going to sue. These are some of the most egregious violations in U.S. history. What’s the other option? We have no other alternative.”

Status of the Suit

The City of Imperial Beach sent its notice of intent to sue on September 27, 2017. At that point, there was a sixty-day period in which the defendant could respond, after which, the suit could be filed. From the time of Mayor Dedina’s announcement that the City of Imperial Beach would sue, others have joined the suit, including Chula Vista, National City, the Port of San Diego and San Diego County. Coronado is notably lacking, although it did offer to support the suit with up to $50,000 in funding.

The suit has, as yet, not been filed. When queried as to when the suit will be filed, Dedina said, “Within the month.”

Mayor Dedina does not rule out another option – if a “gold standard solution with funding” is proposed, then the suit will not move forward. But Dedina does not appear to hold much hope for that happening.  As to the outcome he is looking for from the suit, Dedina’s hope is that a federal judge will order the U.S. government to fix the problem. He said, “Everyone knows what to do. It just mystifies me why they aren’t doing it.”