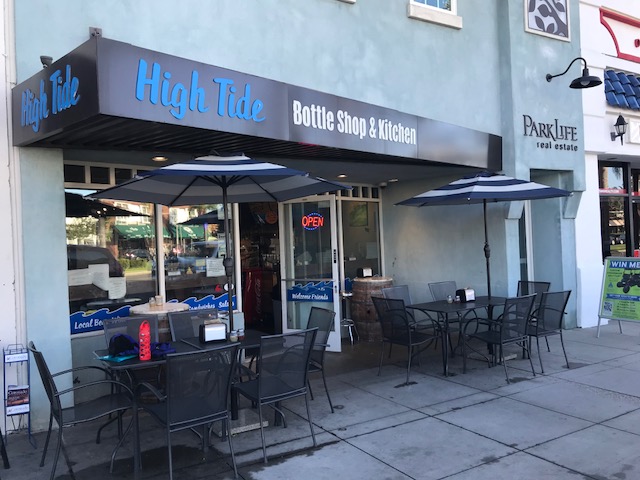 Tom Latona had been working in Coronado for a good many years and had been thinking about opening a place of his own when he came upon a business for sale. “It wasn’t what I was thinking of. It was a liquor and convenience store,” recounts Latona. But it was a liquor store with a critical element – a kitchen. So Latona bounced the idea off some of his friends (four of whom are now his partners) at a barbecue, and High Tide Bottle Shop was born. The shop opened in December of 2014 and has been serving up pizza ever since.

Latona points out that the business isn’t a pizza shop and it’s not a liquor store. Rather, it’s a pizza shop, where you can buy whole pies or slices (as well as a host of other food items), a liquor/convenience store, and a delivery business (which is made all the more convenient because it delivers anything found in the shop).

Latona accounts for the success of the business in a number of ways. First, he points to his integration into the community – knowing what’s going on and what various people might want. It is not uncommon for Latona to stop into the main office at Coronado High School to find out if there are any big events coming up that he needs to plan for – he says that on nights when there is a parent event at school, he gets a lot of calls for pizza for dinner.

In addition, Latona has focused on giving back to the community – not just in terms of sponsoring events or supporting the schools. He started delivering 30 free-slice cards to the Coronado Police Department each month with the intention that they be handed out to kids seen doing the right thing (for instance, walking in the cross walk, wearing a helmet while on bikes, etc.).

Another connection to the community is that Latona displays and sells art by locals. As he put it, “I could have beer posters up on the walls or I can have art. We have art.”

A second element to his success is quality ingredients. Latona says he relies on quality, organic ingredients, homemade dough and sauces, in addition to locally crafted beers and soda. This has led to a lot of happy customers, as witnessed by his four-star rating on Yelp.

Finally, he says, “Reputation is everything. I empower my employees to make it right with the customer.” If a customer is unhappy, Latona wants his staff to fix it. This, undoubtedly, has influenced his high Yelp rating which, in turn, brings in new customers.

Latona says the business does well during the summer, but his real clientele is locals. “I have something for everyone. If a kid comes in and has a slice at lunch and likes it, he takes that home and tells his mom he wants pizza for dinner. When mom finds out we will deliver the pizza with a bottle of Chardonnay and dad finds out he can get a six pack along with it, then we’ve given something to everyone.”

He also points out the importance of the military to his business. “We feed a lot of Navy SEALs… That’s a feather in our cap.”

High Tide has evolved over the three years it has been open. The menu is extensive and includes everything from breakfast items – served daily from 8 am to 11 am – (including donuts and the “Four Dollar Breakfast”) to the expected pizza and several desserts (not least of which is fresh gelato from Nado Gelato).

Perhaps the best change – something that High Tide did not have initially – is the delivery service. It runs from 11 am to close every day. And, High Tide even delivers to the summer Sunday concerts in the park.

The on-line ordering menu is extensive and simple to use. Check it out here. 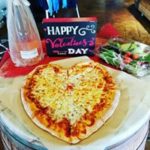