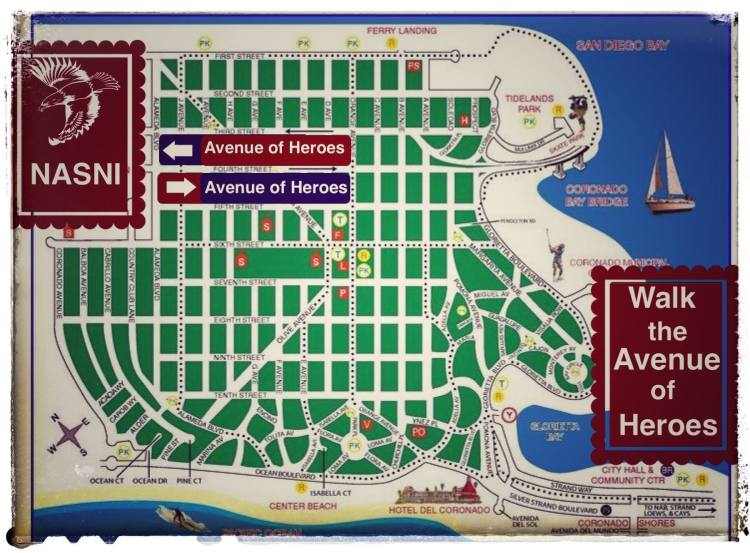 During November 2-7, 16 new Avenue of Heroes banners are going up just in time for Veterans Day. Our Avenue of Heroes run along Third and Fourth Streets from Orange to North Island and are switched on Veteran’s Day in November and Memorial Day in May. This is our first full year for a total of 32 Heroes, and applications/nominations are accepted through the City Website at:

A small dedication ceremony will be held for the families on November 7, 2015 and the biographies will be published in the local news outlets and compiled for an annual “Coronado Avenue of Heroes” book. Look for the books in local shops, online, and at the Historical Society.

Rear Admiral Wreford Goss “Moon” Chapple served in the Navy from 1930 to retirement in 1958 and served with distinction having been awarded the Navy Cross (twice), three Silver Stars and a Bronze Star for conspicuous gallantry and success against the enemy. “Moon” Chapple is considered one of the heroes of World War II and his submarine exploits were featured in numerous naval history books, articles in Colliers and Life magazines and the 1950’s television series “The Silent Service.” The experiences shared by the officers and men in combat weld them into a closely knit group and, as Rear Admiral W. G. “Moon” Chapple often stated “We will all be like brothers to the end of our days.”

“In fact, in his later years when a caregiver escorted him to a Submariners Convention in Phoenix, AZ, the caregiver came back with a new respect when he witnessed the convention goers line up around the banquet room to shake Chapple’s hand when he entered the conference. Chapple was loved by his men and his leadership was marked by an early instilled sense of duty, honor, and drive for accomplishing the goal while respecting and caring for the men he commanded.”

This leadership was fostered at a young age. Wreford Goss Chapple was born in Billings Montana March 19, 1908. He graduated from the U S Naval Academy in 1930. While at the Academy “Moon” lettered in Football, was the Heavy Weight Boxer for the Naval Academy’s Boxing Team and was elected President of the Class of 1930.

After graduation “Moon” was assigned to the USS Milwaukee and after qualifying as an “Officer of the Deck” volunteered and was selected for the submarine service. Upon graduation from Submarine School in December 1932 “Moon” served in various billets on the submarines USS S-38, USS PIKE (SS-173) , USS PERCH (SS-176), USS TARPON (SS-175), all assigned to the US Asiatic Fleet.

In 1934, “Moon” met and married his wife Grace and they had their son, Mike Chapple, in 1935. His son later followed in his father’s footsteps and attended the Naval Academy and served in the Navy himself.

In November of 1940 Lieutenant “Moon” Chapple took command of the USS S-38 and on December 8, shortly after the attack on Pearl Harbor, LT Chapple departed from Manila Bay with orders to patrol off Mindoro in the Philippine Islands.

Operating in shallow waters the S-38 was detected and attacked several times by Japanese air and surface forces sustaining serious damage but succeeded in sinking the second Japanese ship sunk in the Pacific theater, the tanker Hayo Maru, and one other and it was at this time he was awarded the Navy Cross for extraordinary heroism and promoted to Lieutenant Commander.

While S-38 was being repaired “Moon” took Command of the USS Permit (SS-178). Ordered to Corregidor in March 1942 to standby to evacuate General Mc Arthur. General Mc Arthur elected not to leave Corregidor by submarine and Permit ended up evacuating 40 US and British Army officers and men. While enroute to Australia, Permit also came across and rescued seven crewmen from the damaged torpedo boat USS PT 32. Chapple made 6 more war patrols on Permit with confirmed sinking of four Japanese large ships and damaging additional Japanese combat and transport vessels. In recognition of .the success of these patrols “Moon” was then awarded his second Navy Cross and Two Silver Stars.

In early August of 1943 Chapple was ordered to the Submarine School in New London, Connecticut as an instructor while awaiting the completion of the building of his next command the USS Bream (SS-243). On 24 January 1944 “Moon” assumed command of the Bream. On 10 March 1944, with ship trials and training completed , LCDR Chapple departed from New London for the Pacific arriving in Brisbane, Australia 8 May 1944. “Moon” made four war patrols including participating in the Battle of Leyte Gulf on the Bream which resulted in damaging the Japanese heavy Cruisers Aoba and Kumano and sharing credit for the sinking of the transport Kagu Maru with two other US submarines as Officer in Tactical Command of the “Wolf Pack” operation. “Moon” Chapple was awarded his third Silver Star and a Bronze Star for conspicuous gallantry and the success of these actions against the enemy.

He remained active in the community until his death on May 20, 1991 at 83 years old. While a resident in Coronado “Moon” was active in the San Diego Chapter of the Naval Academy Alumnae Association, San Diego Navy League, Submarine Veterans of WW II, Christ Episcopal Church, and got a teaching credential from CalWestern University and served as a substitute teacher at Coronado High School and taught at Coronado’s Alternative School. He also served on Coronado’s Planning Commission when the Coronado Shores were initially built and was a member of Hotel Del Coronado Beach and Tennis Club, a member of San Diego Kiwanis Club, the Coronado Crown Club, and Coronado Round Table. During his years in Coronado he dabbled in real estate and was owner/builder of three homes in Coronado Village, one in the Cays and converted a ten unit apartment building in Del Mar to condominiums.

He loved people and always had a few kind words and a pleasant look for everyone he met. He raised his son Mike and also adopted Jack Chapple, the son of his second wife, Mary Cobb Chapple. “Moon” took great pride in both his boys and loved his family, Mike a successful military career, and Jack attended and played football at Stanford and went on to play for the 49er’s. Rear Admiral Wreford Goss “Moon” Chapple was greatly admired and loved very much by his friends and family.

Click here to read more bios of these heroes.