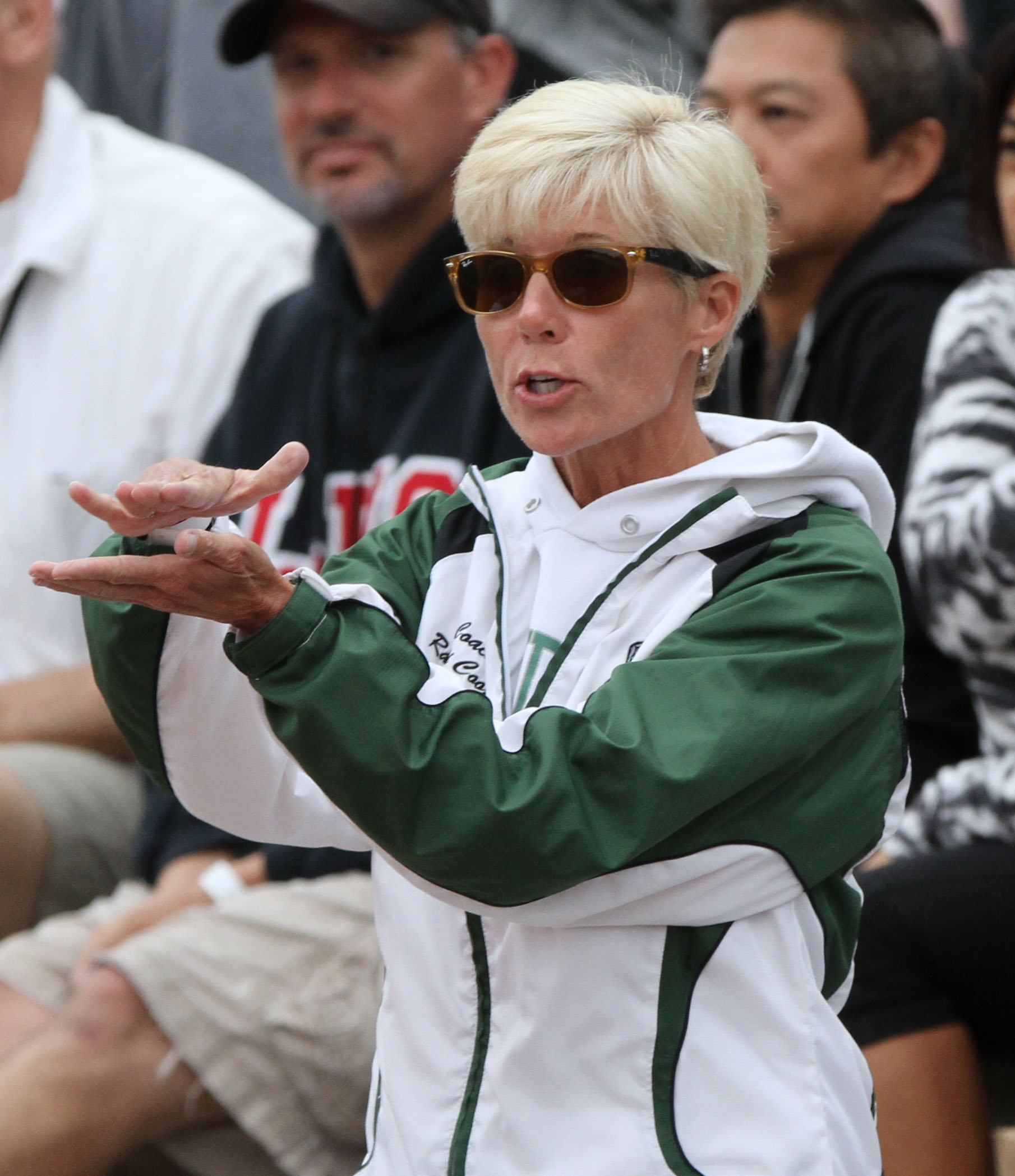 (Burbank, Calif.)  OnTrack and Field, Inc. (“OnTrack”)the Burbank, Californiabased track and field equipment supply companywill host the winner of the company’s 2015 pole vault coaches’ competition during a complimentary trip to the National Pole Vault Summit in Reno, Nevada, this weekend. Dr. Randi Cooper, a resident of Coronado Island, Calif., has been selected from among nominees from around the country to receive the awardthe Jeff Truman Memorial Pole Vault
Summitshipwhich will send Coach Cooper to the twoday convention (January 16 17) offering intensive workshops and exhibitions for instructors and athletes focusing exclusively on the pole vault event.

“Coach Cooper’s willingness to step in to help a large pole vault program in a time of need, and do so successfully with very little experience on a very accelerated learning curve, is a testament to her natural coaching abilities,” says Ron Morris, OnTrack’s CEO. “Her level of commitment to San Diego area pole vaulters and their event, and her great enthusiasm for constantly enhancing her coaching skills make her an outstanding choice for our twelveth awarding of the Summitship. We are thrilled to nation who, at great personal expense, keep this event going for our country’s young track and field athletes,” says Morris.

The Summitship is named for Jeff Truman, a former OnTrack employee, athlete and pole vault coach who suffered an untimely death in 2002, at the age of 27. “When we lost Jeff, we felt compelled to keep his positive spirit and coaching legacy alive to inspire other pole vault coaches and athletes. We decided to do this by selecting someone who embodied similar qualities that we could celebrate as exemplary, and at the same time, encourage that person to persevere in their efforts and give them an opportunity to continue their coaching education,” says Morris. “We feel that sending our honoree to the Pole Vault Summit is a great way to accomplish these goals.”

And The Winner Is

To date, OnTrack has awarded the Jeff Truman Memorial Pole Vault Summit-Ship to 11 pole vault coaches representing athletic clubs, high schools and school districts from South Carolina to Hawaii. Other than their obsession with the pole vault, they all had certain things in common: They had a foundation in track and field coaching and/or competitionand they were all men.

This year, the SummitShip Selection Committee changed things up with number 12-OnTrack’s 2015 Summit-Ship winner, Dr. Randi Cooper. A clinical psychologist by profession, as well as a mother of three, Coach Cooper is a track parent turned regional pole vault guru.

Having had no competitive pole vault experience herself, Coach Cooper is surprised by how much she has grown to love the event. “I really just wanted to help out initially,” remembers Cooper, who stepped in when her youngest son, Xander Law, found himself heading into his 20122013 senior year at Otay Ranch High School in Chula Vista without a pole vault coach. “I knew they needed a coach and I figured I would just fill in for a year.”

Xander had experienced modest freshman success as a novice 10′ vaulter. But then things really started clicking for him when, just as he was going through a growth spurt and developing more speed on the runway, he had the rare opportunity to be coached by the 2000 Olympic women’s champion. Stacy Dragila was working with athletes at the neighboring Olympic Training Center, and Xander spent the summer vaulting with her. When school started back up, Dragila, the first woman in Olympic history to win a gold medal in the pole vault, agreed to coach the Otay Ranch vaulters, and through hard work and expert coaching, Xander improved his PR by four feet, finishing off his sophomore year at 14′ 6”.

All the while, Coach Cooper carefully studied the event, and Dragila’s methods. Having been a competitive athlete and a coach herself (she won four national roller skating titles as a youngster, then coached the sport as a young adult), Coach Cooper appreciated what she calls Dragila’s unbridaled enthusiasm for coaching the vault. “If you had to have a master’s class in how to coach pole vault, that’s what [Stacey] brings to the table.”

“She sort of stood back and observed,” remembers Dragila, imagining that through Coach Cooper’s clinical studies, she has developed the ability to absorb information and apply it effectively. “She took it all inshe might ask a question here or thereand later she’d discuss what she had seen when she and Xander went home. While they say all good things must come to an end, “they” leave out the part where most endings spawn new beginnings. In this case, after two years, Dragila said goodbye to San Diego to move back to Idaho to raise her young family. This change, left the Otay Ranch vaulters and Head Track Coach Ian Cumming looking for a new pole vault coach.

Coach Cooper’s private practice afforded her the flexibility to accommodate her coaching schedule. “I worked until two-thirty everyday. At three o’clock I was out at the track. We had our A, B and C team captains selected, and they rotated their groups through conditioning, running and [plyometrics], and vaultingI had seventeen amazing kidsthey were organized, they worked as a team.”

As the winning Summit-Ship nomination submitted by her daughter, Kelli Law, attests, Coach Cooper went on to guide Xander to pole vault records at his high school and in his league with a 16′ winning jump in Mesa League finals. Xander’s 15′ 9” performance at the 2013 Arcadia Invitational set a record for the meet’s daytime competition. He took second in California Interscholastic Federation competition and got fifth at State, inspiring the Sweetwater Union High School District to name him “Athlete of the Decade”. Last year, as a freshman representing Cuyamaca College, Xander placed fourth in the California Community College Association championship meet.

“I trusted her more than any other coach,” says Xander, looking back on his senior year. “[My mom] is very intelligent and perceptive, and she understands me, which helped us develop a really good coachathlete relationship.”

Coach Cooper’s intention to help her son and his teammates for a year grew to include coaching with Lyle Barton and his San Diego Vault Club. As a result, Coach Cooper became acquainted with Lauren Bartsch, the Coronado High School vaulter she went on to coach to two consecutive league victories, three appearances in the finals at CIF San Diego Section, and her high school’s record for girls at 11′ 7” in 2014. (Bartsch currently competes for California State University, Long Beach.)

Coronado Head Coach George Green was eager to welcome Coach Cooper to work with Bartsch and his small collection of vaulters, one which recently added a new member. In what was a surprise development, 15-year-old Kelli presented Coach Cooper with yet another reason to continue pursuing her coaching mission. “She said, ‘Mom, I want to have with you what Xander had with you,”‘ recounts the proud mother, obviously touched by her daughter’s inspiration to pursue pole vaulting.

Coach Green appreciates Dr. Cooper’s ability to communicate in a way unique to each athlete’s individual needs and abilities. “She is very complete, knows the sport and is able to develop athletes from beginners to being able to compete at a national level.” He is also impressed with her ability to incorporate new tools into her coaching. “She uses all the latest equipment like Coaches Eye, and all the digital equipment,” observes Coach Green. As the purveyor of SDTrackMag.com, Coach Green’s years of experience have taught him just how fortunate he is to have Coach Cooper on his team. “Pole vault and throws coaches are the two hardest coaches to find.”

Dr. Cooper has made the most of her move. In addition to filling the pole vault coaching post at Coronado, she has established Island Vault Club, a no-fee program sanctioned through USATF, enabling her to coach a combination of high school and collegiate vaulters as a volunteer under the protection of the organization’s insurance. “It’s kind of a drop-in thing for about fifteen to twenty kids. We meet once a week [at the high school], typically on Sundays, and it’s bring your own pole.'”

Coronado High School Cross Country season is only eight weeks away and it's time for summer training. Championships are won over the summer, not...
Read more
Sports

The San Diego Track & Field Guide was started in 1965 and maintains a list of the top performances in each event from that time...
Read more
Sports

Summer Cross Country training and the upcoming fall season Coronado has had a lot of success in the fall sport of Cross Country over the...
Read more

Places to run in Coronado Parks

If you're looking for a place to run in Coronado here's a link to some of the Park routes the Islander High School...
Read more