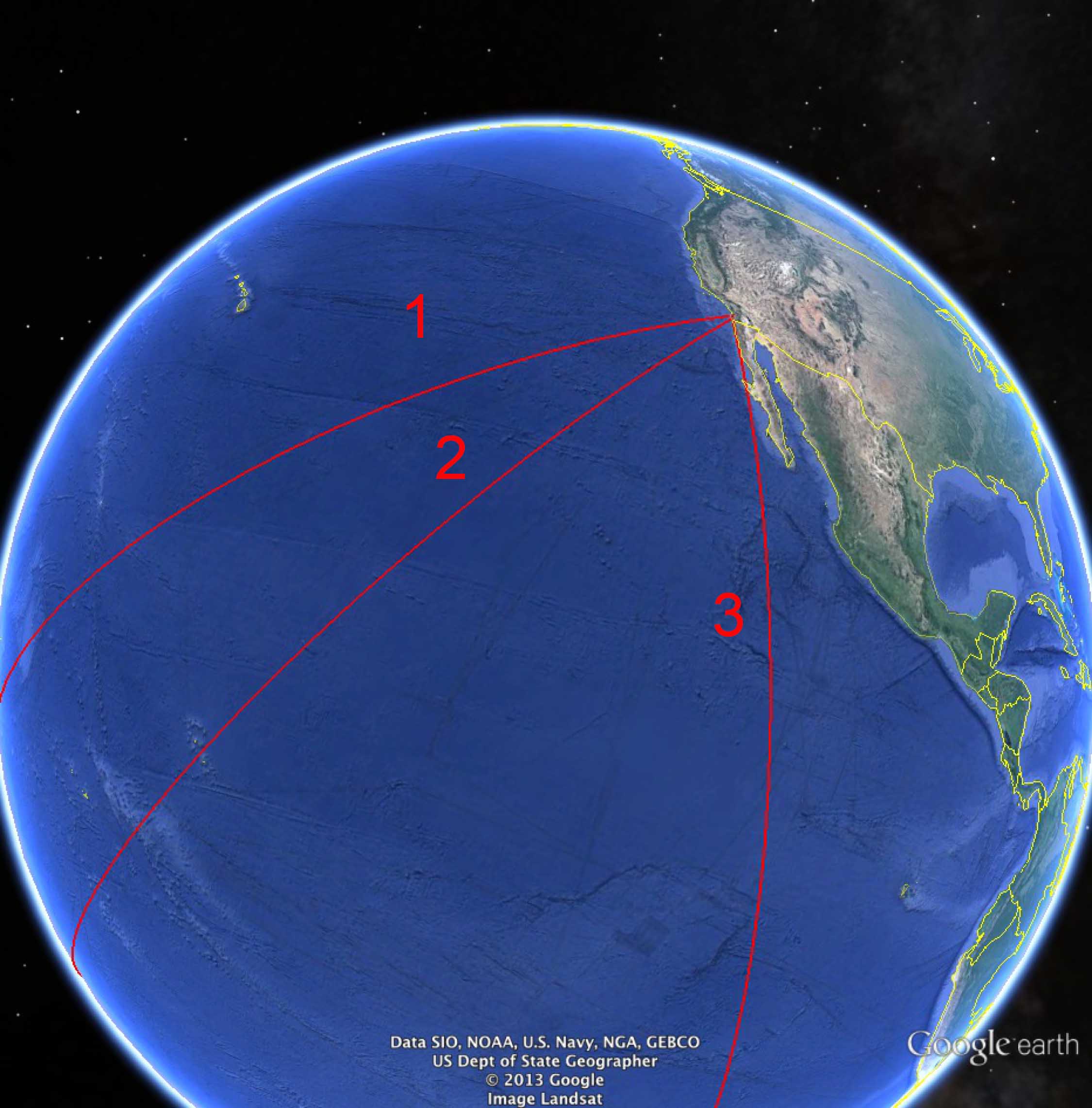 This question was inspired by a recent visitor to the Coronado Visitor Center who asked: “What’s the furthest distance anyone has traveled to get to Coronado?” (Our volunteers handle all kinds of these wild questions from visitors!)

There are obviously many ways to define this question  one can come to Coronado through myriad choices involving multi-stop, multi-change airline flights  we chose the more interesting approach to the answer. What if one were limited to straight-line travel only and travel not trifled with anything in between? In other words, what is the farthest distance from Coronado in a straight line with no intervening points?

Our first step was to draw all possible straight lines on a globe starting from the highest flagpole of the Hotel Del. We, then, rejected any line that crossed land (continents, islands, Point Loma, etc.). And we defined a “straight line” as just that, we would go in a particular direction and would continue as “straight as an arrow” until we hit someplace.*

Our first guess was to head out across the Pacific toward Australia. So we began on course 232 degrees true from the Del, passing outbound just south of the tip of Point Loma. This pathway looked pretty good  NOTHING lies in your way. Across the Pacific, south of the equator, just missing the North Island of New Zealand and the southern tip of Australia’s Tasmania, then across the wide Indian Ocean. Our end point turned out to be the city of Manakara on the island of Madagascar off the African coast. Total distance: about 11,805 nautical miles. Who could have guessed!

But wait, what if we headed on a track closer to the continent of Antarctica, shouldn’t that be longer (as long as there were no islands in the way). So we shifted our beginning track to 210 degrees true from the Del’s flagpole now aiming just to the right of Puki Point (on the right-most of the Coronado Islands). Off we went  again across the Pacific, south of the equator, to the east of New Zealand this time, barely clearing Antarctica’s Wilkes Coast at Dumont D’urville, across the Indian Ocean, and winding up at Baraawe, a seaside village just south of Mogadishu, Somalia. Total distance: about 13,080 nautical miles. Cool!

Could we fly along the other side of Antarctica? That would certainly add more miles. Drawing a straight line, this time parallel to the Mexican coast and aimed at 156 degrees true resulted in a SPECTACULAR find, such a course cleverly threads-the-needle between the south Chilean coast and the islands at the tip of the Antarctic Peninsula and then passes the continent on its far side, barely grazing the Princess Martha Coast. If we could do that, our straight course winds up at Galle, Sri Lanka, just south of India for a total distance of about 13,300 nautical miles!!! But wait  in the midst of our excitement, our double-check revealed that this thread-the-needle course bumped into points of land right at the beginning of travel, along the first hundred miles of the Baja coast, and then failed to clear the Mexican Punta Eugenia. All that way, lost in the first miles of travel. Rats!

So the correct answer at the Coronado Visitor Center (and for trivia buffs everywhere) is the unlikely direct passage from Mogadishu to the Crown City  over 13,000 miles!! (BL)

* As navigators will tell you, this is not a “rhumb line,” that is defined as travelling along the same bearing relative to true north. Our straight-line travel is a “great circle” route  the shortest distance between two points on a globe. If you are not deeply into spherical geometry, trust me. 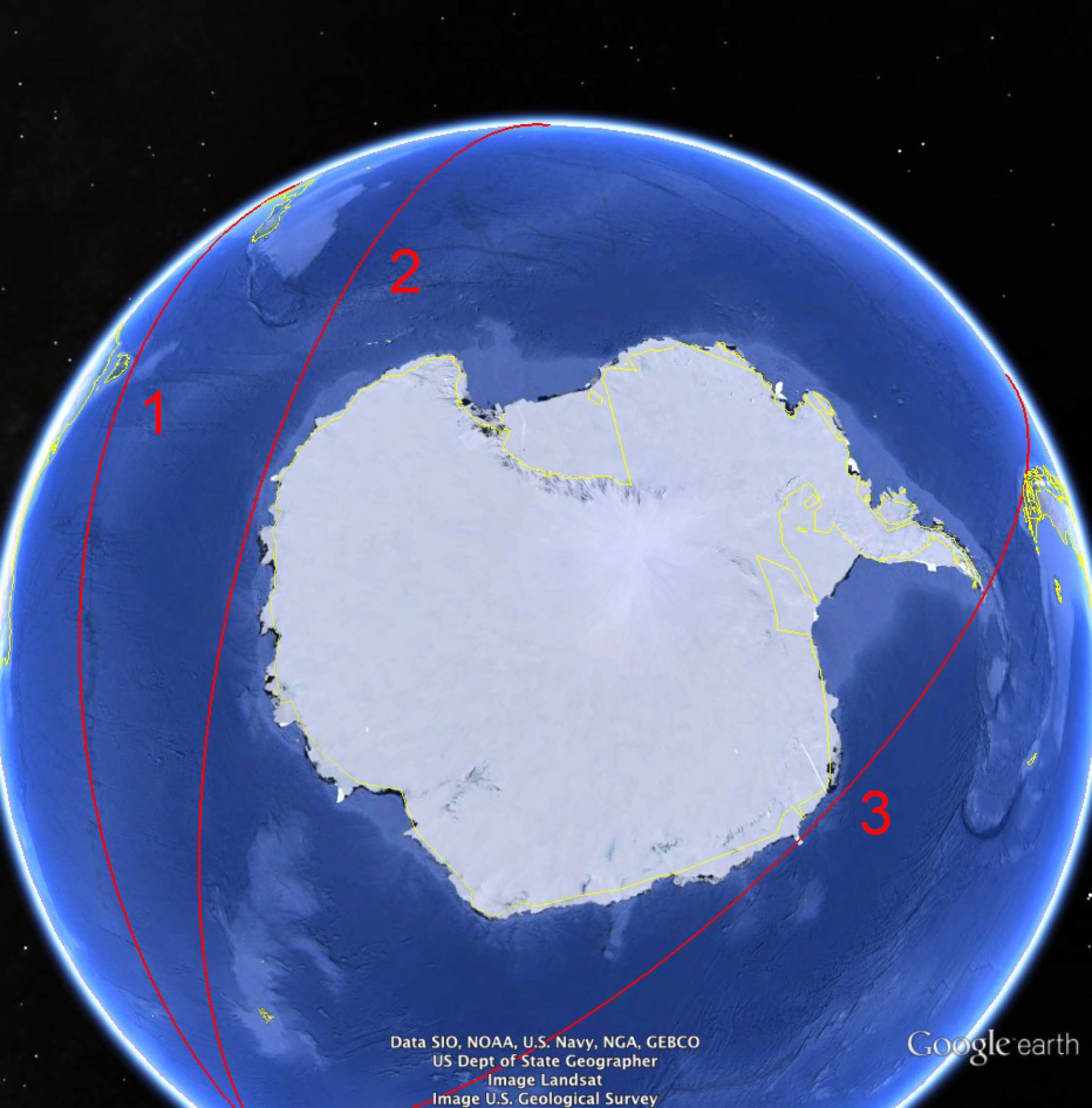