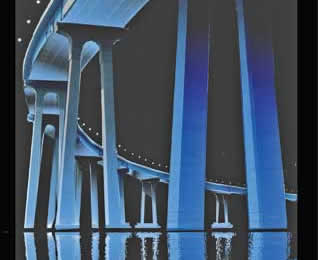 In August, the San Diego Unified Port District selected three finalists to design an artistic lighting project for the 2.1-mile San Diego-Coronado Bridge. The teams are Bideau Company of Ballan-Mire, France; Peter Fink of London; and Ned Kahn/Patrick McInerney Associates/Jason Edling of California. The teams received $15,000 each to refine their proposals, which are due May 15. A selection panel will recommend one to port commissioners, who likely will make a decision before the end of the year. It will be at least a year before the project is done. The port and its partner, the state Department of Transportation, asked the firms to design a distinctive signature artwork that creates a sense of place, draws people to the region and stands the test of time. The port has emphasized the use of environmentally friendly technology. We recently asked the teams about their plans. QUESTION: What do you envision for the bridge? ANSWER-BERTRAND CHIRON: We are excited to soon hand over our illumination proposal to the project committee. After that follows a couple of weeks of waiting before going to California to make our presentation. My intention is to give San Diego Bay and San Diego residents a new illuminated night-identity to be proud of. ANSWER-PETER FINK: We live in a visual age in which image and brand of large-scale, man-made objects in our lives such as bridges and buildings is fast becoming a part of their function. Light plays a key role in creating this. In our approach, we are exploring how the poetry of the bridge in its daytime setting can be contrasted with a totally new night appearance, adding a totally different dimension to this famous structure. ANSWER-PATRICK MCINERNEY: Our considerations for the proposed lighting of the San Diego-Coronado Bridge can be grouped under three headings. Firstly, we must consider the place, its constraints, opportunities and possibilities. Secondly, we must consider the bridge itself, its existing structure and form, the very basis for which our ideas shall be generated and formed. Thirdly, we must consider the idea of “icon” and the responsibility that this implies. As undeniably the main architectural feature in San Diego, the bridge has the potential to encourage and nurture observation. Read the entire Union Tribune article here.