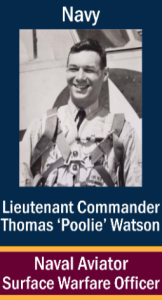 LCDR Thomas “Poolie” Watson was born in Cadillac, Michigan, in February 1932 to Richard Poole Watson and Pauline Anne Ovaitt. He graduated from Cadillac High School in 1950 and immediately reported to the U.S. Naval Academy. Four years later, he graduated and was commissioned an ensign in the US Navy. Ensign Watson attended flight school in Pensacola, Florida, and proudly pinned on his Wings of Gold.

After flight school, he transferred to Naval Air Station North Island in Coronado, California, and reported aboard All Weather Attack Squadron 35. After deploying to the Western Pacific aboard USS Shangri-La for six months, he made his second WESTPAC deployment aboard USS Ticonderoga. Lt. j.g. Watson then returned to NASNI as a fighter pilot. Follow-on assignments included flight instructor and training officer in Pensacola, Florida and Glynco, Georgia. In 1963, he deployed for more than 14 months to the South Atlantic and Mediterranean where he qualified as a Surface Warfare Officer. After his deployment, Lt. Cmdr. Watson was assigned as executive officer of Composite Squadron 5 in Okinawa, Japan. Subsequent assignments included Fleet Combat Direction Systems Support Activity in Point Loma, California, and Tactical Air Control Squadron 1 in Coronado.

In 1969, newlyweds Watson and his wife, Kirby, celebrated the birth of their first son, Robb. A year later, their second son, Rick, was born three days after Christmas. In 1971, the Watsons purchased their home of 50-plus years on E Avenue, and their sons began attending Coronado schools. Lt. Cmdr. Watson retired in June 1974 with 20 years of service, many deployments, and credits toward a Master of Business Administration in
finance earned through night school. Along with being an active youth soccer coach, member of the Crown and Lions Clubs, and real estate investor, Watson spent his retirement working as an energy manager for SDG&E, an energy auditor for the Southland Corporation, and finally joining his sons in managing and operating the family ground transportation business, Avant-Garde Global Transportation.

“Poolie” and Kirby enjoy hosting family and friends at their home and spending time with granddaughter, Maddie. Summer Concerts in the Park and Fourth of July continue to be family favorite activities.