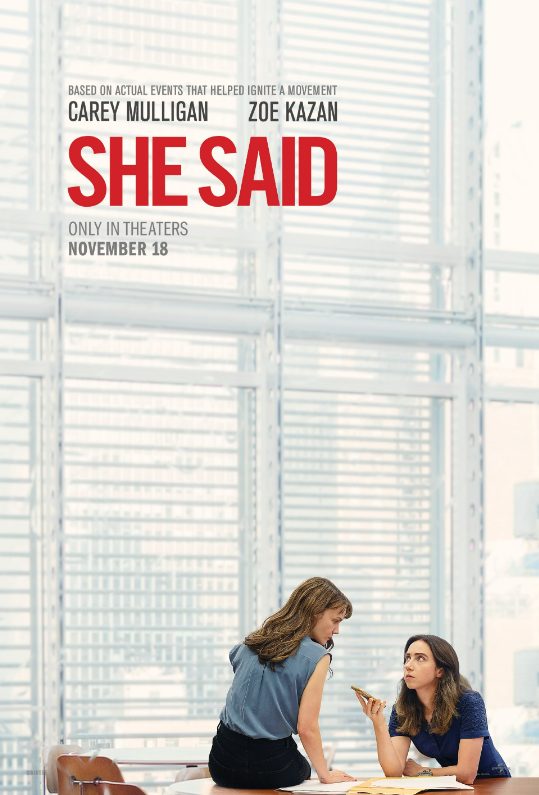 This movie isn’t flashy and it isn’t loud, but it tells its story with realism and candor: “She Said” chronicles the reporting of two New York Times journalists who pull the red carpet out from under one of Hollywood’s most powerful men. He’s a serial sexual predator, and he’s victimized everyone from up-and-coming actresses to production assistants and almost almost everyone in between. The worst part? No one wants to talk about it.

Welcome to the Harvey Weinstein saga and birth of a movement that mobilized thousands of women. It’s like the #Metoo version of “Spotlight.” In a careful, measured shoe-leather style, the film follows New York Times journalists Jodi Kantor (Zoe Kazan) and Megan Twohey (Carey Mulligan) as they knock on doors, make endless phone calls and meet with clandestine sources to piece together a story that no one wants to tell. Gwyneth doesn’t want to go on record, Ashley Judd is hesitating, and so are dozens of other victims. It sort of begs the question: “If that can happen to Hollywood actresses, who else is it happening to?”

Kantor asks the more senior reporter, Twohey, how she was able to get some Donald Trump assault victims to talk about their experiences with harassment. She says, “I can’t change what happened to you in the past, but together, we may be able to use your experience to help other people. The truth, basically.”

This movie isn’t pretty. It’s unglamorous and unhurried, but plods along with the fierce and tenacious devotion of the two journalists. The film does a fantastic job of highlighting the sacrifices the women make to break the story: when they are home with the kids, they are distracted, handing over Netflix passwords to take phone calls from sources; they type away at the office long past midnight. They leave their families at home, flying to different continents in search of sources with zero promise of return. The film also underscores the hate and vitriol that often haunts journalists who dig up an unsavory story: Trump calls Twohey early in the film and calls her “disgusting,” and another caller says he’s going to rape and murder her, and dump her body in the Hudson River.

But the victims’ stories are harder to listen to. They are assaulted, some are raped. All are humiliated. One attempts suicide. Some of them accept monetary settlements which silence them forever. One victim warns, “This story is bigger than Weinstein. It’s about a the system protecting abusers.”

The payoff? After the story came out, more than 80 women came forward and accused Weinstein of inappropriate acts. In February 2020, he was found guilty of rape and later sentenced to 23 years in prison.

While it doesn’t scream at you, “She Said” says everything it needs to say, with the same strength and grit that women around the world said #MeToo.

Rating: R for language and descriptions of sexual assault