From a hometown Coronado lifeguard to a WWII Paratrooper who jumped into Normandy on D-Day and became an American Hero who inspired millions.

He was just a small town boy… destined to become a hometown hero, a national hero, an international hero, and a man still going strong as he celebrated his 100th birthday.

Heroes. They are often the most ordinary of people doing extraordinary things in times of crisis. They step into harm’s way, even put their own lives at risk, for the greater good of others. They act without thought of recognition or reward, simply because it’s the right thing to do. As Joseph Campbell, author of A Hero’s Journey, puts it, “A hero is someone who has given his or her life to something bigger than oneself.”

This was Tom Rice… and then some. Born in Coronado on August 15, 1921, Tom’s life was fairly typical for a small, sunny, quaint community. He went to public school and was one of the first lifeguards at our local beach. But historic events were calling young Tom’s generation into action and, after graduating high school in 1940, he joined the Army as WWII was underway with America on the brink of joining the conflict.

Following rigorous training, Tom became a member of the 101st Airborne Division and would command a small paratrooper combat group.

His unit deployed in 1944, and on June 6, shortly after midnight, in terrible weather, they were dropped into Normandy on D-Day. 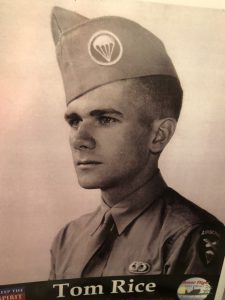 Tom’s plane came under heavy German anti-aircraft fire just before he jumped. As the pilot maneuvered, flying too fast and low, Tom became hung up on the door of the plane and slammed into the fuselage. Somehow, he managed to free himself, open his parachute and land safely. He eventually reunited with his unit and fought for weeks as the allies sought to liberate France. During skirmishes with the Nazis he was wounded by shrapnel and a sniper bullet that struck his left knee.

In the fall of 1944, Tom took part in Operation Market Garden, an Allied military campaign in the Netherlands designed to establish an invasion route into northern Germany. That winter he was wounded again, this time fighting in the Battle of the Bulge in Bastogne, when enemy bullets tore a four-inch piece off the radial bone just below his right elbow. In 1945, Tom was in Germany when the 101st Paratroopers unit captured the “Eagle’s Nest” on Kehlstein Mountain in the Bavarian Alps where Hitler had planned his conquest of Europe.

On May 7, 1945, the Germans surrendered. Tom was honorably discharged in 1946, and subsequently awarded numerous military honors including a Purple Heart with two Oak Leaf Clusters, two Invasion Arrows, a Combat Infantry Badge, a Bronze Star with Cluster, a Good Conduct Medal, a French Fourregue (a decoration instituted by Napoleon I for units which distinguished themselves in battle), a Belgium Lanyard (awarded to American units who fought with distinguished service in the liberation of Belgium in WWII) and a Parachutist Badge (a military badge of the US Armed Forces also commonly referred to as “Jump Wings”).

In April 2015, the French government honored Tom and thirteen other veterans by appointing them Knights of the Legion of Honor for their heroic service in the liberation of France during WWII. This is the highest honor that France grants to citizens and foreigners.

Tom kept a souvenir from the capture of the Eagle’s Nest in the Bavarian Alps: A copy of Adolf Hitler’s autobiographical manifesto, Mein Kampf.

After being honorably discharged, Tom returned to live in his family home in Coronado, went on to graduate from San Diego State University, fathered five children, and taught social studies and history in San Diego for 44 years. Tom continued to participate in commemorations of D-Day and the Battle of Normandy. He also wasn’t about to stop jumping out of planes. At age 97, he parachuted in tandem near his original landing spot in France during celebrations of the 75th anniversary of D-Day.

I met Tom in Coronado while doing a story on a documentary on Tom’s Normandy jump premiering at our local theater. It was the work of CJ Machado, an advocate for patriots, an author, filmmaker and adventurer (she even jumped herself at the Normandy remembrance). 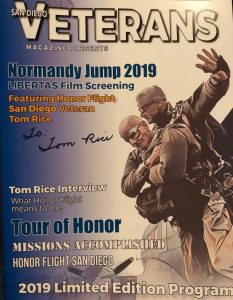 Like everyone else, I was immediately taken with Tom. Despite my former career as a foreign correspondent, which included being on the front lines of wars, conflicts and insurrections, I had never met such a humble, resilient and inspirational leader. Here was a hometown hero, a national hero, an international hero, and a man still going strong as he approached a full century of life.

On June 6, 2021, the 77th anniversary of D-Day, Liberty Bells were rung in remembrance starting in Normandy and spreading around the world.

I was with Tom onboard the U.S.S. Midway in San Diego as he rang the ship’s bell, chanting “never forget, never forget.”

I would soon become an informal member of “Team Tom,” and help facilitate a special event on August 15, 2021, the day Tom Rice turned 100 years old. His plan was to jump into Normandy again, but the pandemic prevented international travel. Undaunted, Tom celebrated his centennial birthday by boarding the Commemorative Air Force’s C-53D D-Day Doll and parachuting onto the beach at the Hotel del Coronado as thousands cheered him on.

Tom’s 100th birthday jump was a spectacular and unforgettable event. It brought our community together during the pandemic just as many were feeling isolated, alienated and divided. I’ll never forget how awestruck we all were as he floated down through the sky towards the soft sand of the beach, his landing area secured by retired Navy SEALs. The crowd cheering and singing happy birthday as he touched down.

Children’s eyes were open wide with awe, knowing in their own way that here was someone special, some surely dreaming that one day they might do great things themselves.

Tom reminded us that if we dig down deeply enough we might just find something within ourselves we didn’t know was there. One day, in the near or distant future, one of us might step far beyond our perceived boundaries and perform a heroic act of our own, little realizing that our actions were prompted, in part, by a flame ignited in our hearts on the day we cheered as WWII Paratrooper Tom Rice celebrated his 100th birthday by parachuting down from the D-Day Doll.

This is what heroes do. They inspire us. Bring us together. Show us what’s possible. This was Tom Rice. Patriot. Hometown Hero. Humble, resilient and inspirational. A man whose remarkable life will be remembered and honored by millions of people around the world. All of us blessed enough to have known Tom Rice will surely hold him in our hearts forever.

NOTE: Tom’s 100th birthday jump would not have happened without the sustained efforts of so many, most notably CJ Machado of Operation Call to Service, Christophe Dugas of Team Tom, parachutist Art Shaffer of Skydive Palatka, Honor Flight San Diego, WWII Living History Paratroopers, “Beyond The Teams” prior Navy SEALs, the Hotel del Coronado, Discover Coronado, City of Coronado and Tom Jones – CEO of Seaborne Cocktails.

Aerial Cinematography by Juan Arango of the Round Canopy Parachuting Team 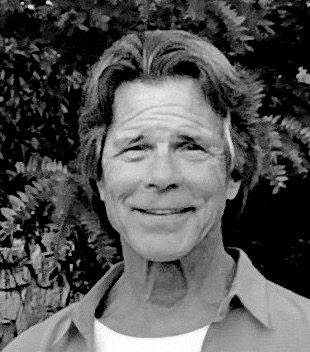 Brad Willis
Brad Willis is an author and retired network news foreign correspondent who has worked in Afghanistan, Iraq, Africa, Latin America and Asia. He has received national and international awards for compassionate journalism and for his war coverage. Brad is longtime Coronado resident who also Commissioner of Public Art for the City of Coronado. Send news tips or story ideas to: [email protected]