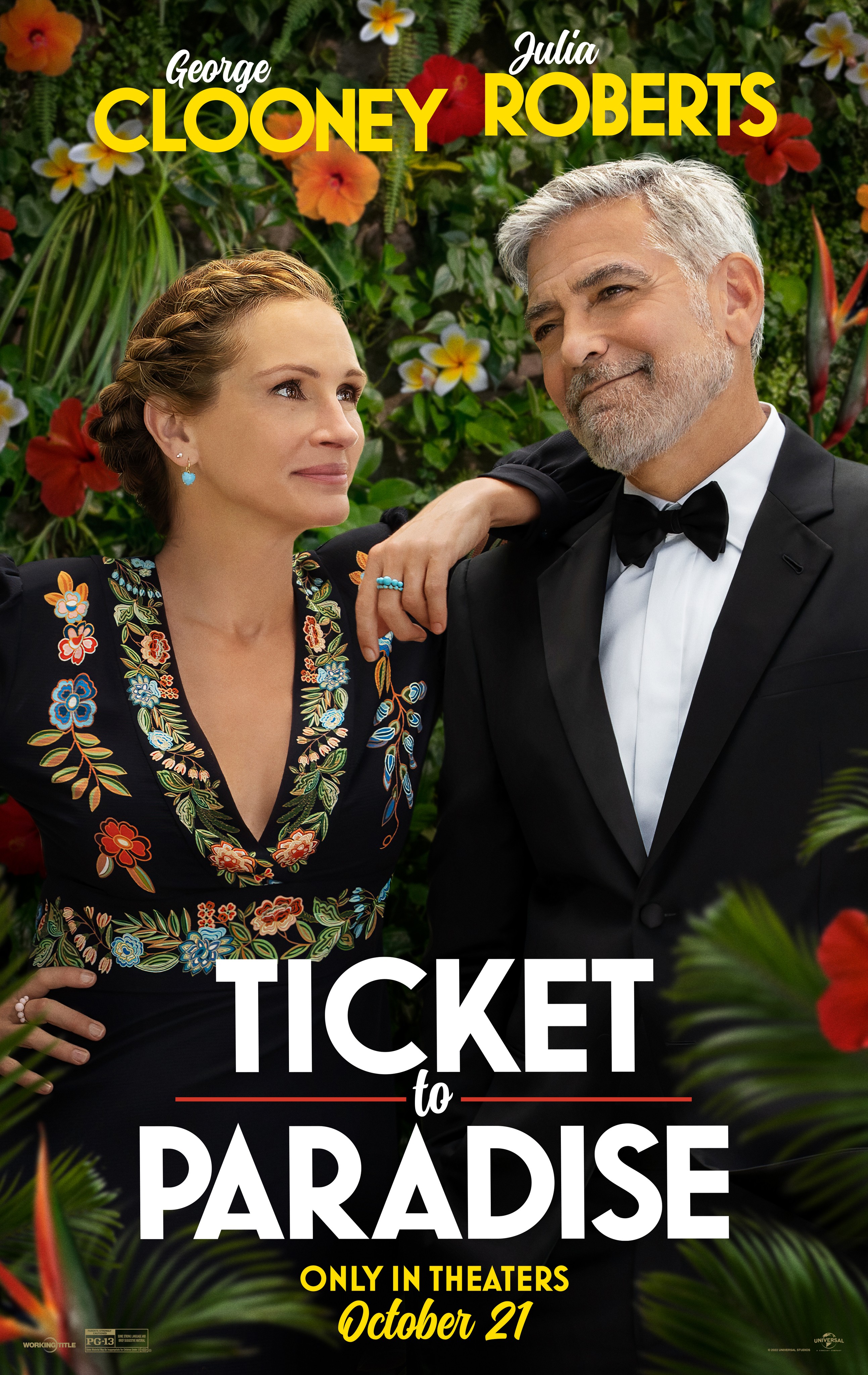 Even though they are starting to show their age (aren’t we all…), Julia Roberts, who plays Georgia, and George Clooney, who plays David, still have that charismatic charm in the latest romcom to hit the big screen, “Ticket to Paradise.” The couple reunites at their daughter Lily’s law school graduation and can hardly get through the ceremony on civil terms. The two have been divorced longer than they were married, there’s loads of history between them, and they constantly zing hilarious barbs at each other throughout the film.

Lily, played by Kaitlyn Dever, goes off with her ditzy best friend Wren, played convincingly by Billie Lourd, to Bali for a post-graduation vacation. Time stands still when she accidently meets Gede, played by Maxime Bouttier, and just 37 days later her parents receive an email about Lily and Gede’s upcoming wedding. Gede is a seaweed farmer (a profession new to me) and Lily embraces his culture and lifestyle in Bali. It would have been nice if the story of the young couple’s romance had been more developed, but the movie mainly focuses on the dueling exes as they join forces to stop their daughter from giving up a promising law career they envision for her.

When Lily’s parents hop on a plane to Bali to try to talk sense into her, their disdain for each other is a well-played comedy. There’s also a side story with Georgia, whose boyfriend Paul is a pilot, played by Lucas Bravo. He is a much too agreeable partner, who has adventures of his own, adding to the storyline.

Georgia and David deviously pull tricks to try and stop the wedding, but Lily is embraced by her soon-to-be large Balinese family, so there is always something to celebrate. The beer pong scene at the bar is hysterical as Roberts and Clooney strut out their retro dance moves to the ’90s hit “Gonna Make You Sweat: Everybody Dance Now.” After way too much of the local moonshine and merriment, they awake to find themselves together in bed the next morning. After years of making it an artform to snipe and find reasons to hate each other, they finally come to terms with their pent up feelings. A kiss freaks them out just as they are starting to find their way back to each other.

The wedding ceremony is fascinating with many rituals, one of which is the filing of the groom’s canine teeth, a rite of passage before marriage (if not done prior). The wise Gede even stops the ceremony to get Lily’s parents’ blessing, before performing the final mat cutting ritual to unite them.

The island scenery is stunning, and you get a taste of the breathtaking nature and the environmental message. Swimming in the ocean with the dolphins is a magical experience, until the reluctant David gets bitten.  Ol Parker, who wrote and directed the film, also penned and directed “Mamma Mia! Here We Go Again,” and is know for his scenery shots.

This fun romantic comedy feels nostalgic, with the reuniting of Roberts and Clooney, who have been in five movies together starting in 2001 with “Ocean’s Eleven” and the most recent “Money Monster” in 2016. It turns out it’s never too late for this duo, as they sail away holding hands, and then suddenly jump in the ocean to presumably stay in Bali to embrace their motto, “Why save the good stuff for later?” which we can all take to heart.