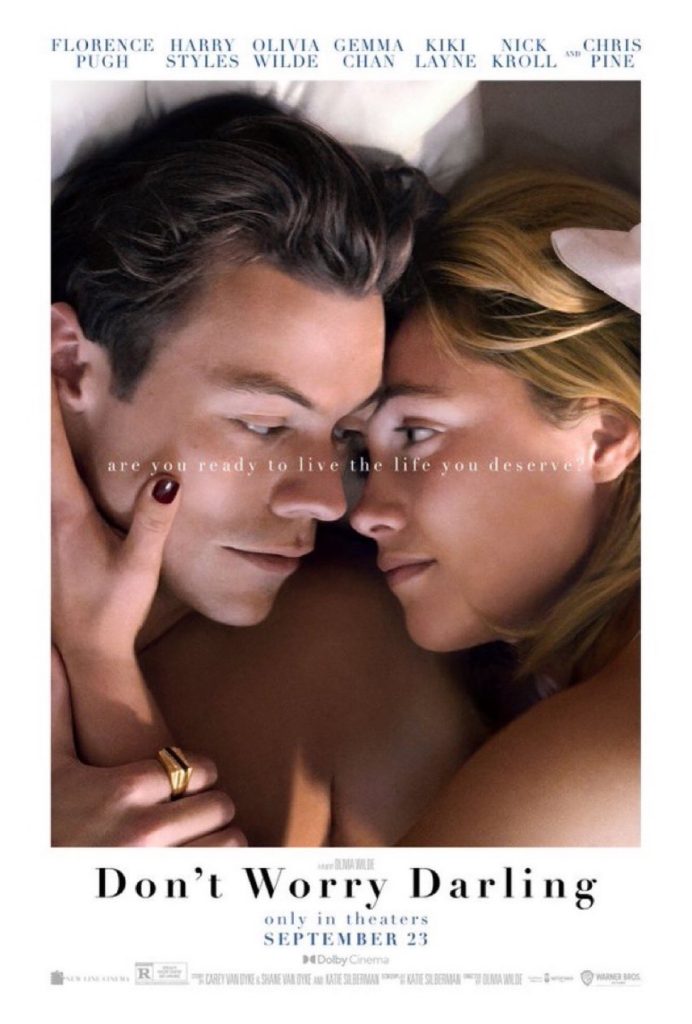 My husband and I agree on only one genre of movies – thrillers. Village Theatre releases  “Don’t Worry Darling” on the Coronado big screen, and we are in! I have been looking forward to this movie as both a thriller lover and as a pop culture nut. The alleged behind-the-scenes drama with Florence Pugh, also known as “Ms. Flo” by director Olivia Wilde, piqued my interest.

The film starts out with my kind of party – martini glasses, couples laughing, all kinds of debauchery. A party guest comments, “drink like a sailor, look like a pin up doll.” That’s exactly what everyone looks like – straight out of a ’50s catalogue. Alice (Florence Pugh) and Jack (Harry Styles) have unbelievable chemistry. Pugh has taken a leap away from Little Women where I saw her last as Amy. She is sexy and fierce. Styles, better known as a heartthrob for boy band One Direction, is very impressive in one of his first acting roles. Finally we have Chris Pines as Frank. Frank is the leader of this pseudo utopia and has a mystery and arrogance that draws you in.

Alice lives in blissful ignorance as a member of the “Victory Corporation” community. She and her housewife friends cook, clean, shop, swim, gossip, dance, and drink. Their husbands drive away every morning to work at the Victory Corporation and aren’t seen again until dinner and socializing time.

This daily routine repeats until Margaret, a former friend of Alice, vocalizes reservations about their community. Margaret asks, “Why are we here? We shouldn’t be here…” It is also shared that Margaret broke the rules and went the corporate headquarters. Alice begins to question her own life in the community, and her perfectly planned life starts to crumble around her. Why can’t they leave? What exactly does the Victory Corporation do? Why do people closest to Alice shut her down when she starts to voice her opinion? Also the question never answered, does Frank have a thing for Alice??

As with all thrillers, there is a turning point. The best thrillers have a twist you don’t see coming. “Don’t Worry Darling” does not disappoint. It is interesting, thought provoking, and has me on the edge of my seat, covered in goosebumps, muttering under my breath in disbelief. Pugh is an unstoppable force, she should win all of the awards for her portrayal of Alice. Also I can’t decide if she looks more like Hilary Duff or Hayden Panettiere. My husband, Greg, thinks Scarlett Johansson.

All in all, I can’t tell if there was off screen drama but the on screen drama was top notch. I am left thinking about this film long after I leave the theater. Greg comments that he likes the premise, but feels there is more of the plot that could use expansion. While I concur, I also appreciate that the film is kept to about the two hour mark. These three hour movies are too much for this mom of two under two!