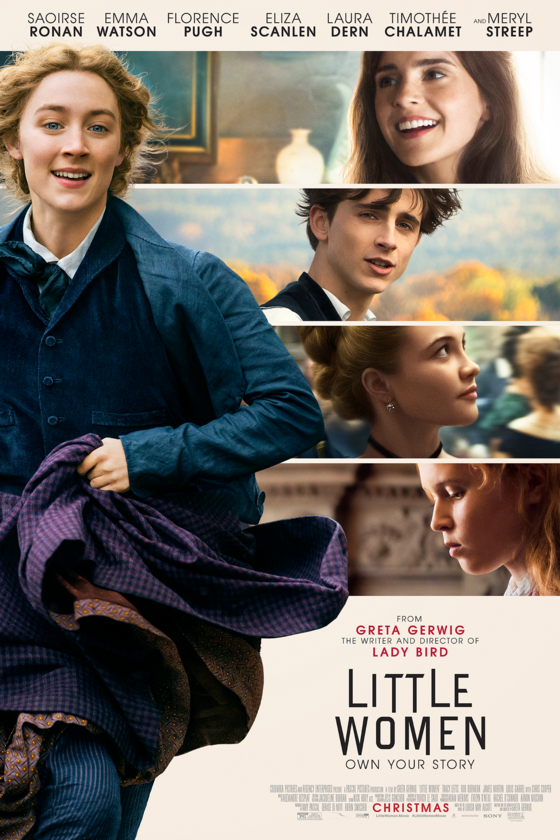 Every seat was filled during the Little Women showing on Saturday night. The film is based on Louisa May Alcott’s 1868 novel. The story follows the four March sisters: Jo (Saoirse Ronan), Meg (Emma Watson), Amy (Florence Pugh), and Beth (Eliza Scanlen). Laura Dern plays the mother of the little women, Marmee.

Laura Dern’s role is very different from other characters we have seen her in lately. For its entire duration, she played Renata Klein in the HBO hit Big Little Lies, an unapologetically career-driven mom. After that, Laura took on another fierce woman, Nora, in the Netflix hit Marriage Story where she plays opposite Adam Driver. You can currently find Adam Driver in the next room at Village Theater headlining in Star Wars: The Rise of Skywalker. In Little Women, Laura takes a softer approach as Marme, showcasing her range and really guiding the audience to understand the values and environment the little women are raised in.

The story follows the March sisters at a current point in their lives and then seven years earlier. It teeters between the timelines, keeping audience members engaged and curious as to how they could have possibly ended up where they did. The sisters are similarly passionate but in different fields. Jo is a writer, Meg is fashionable, Amy is artistic, and Beth is musically gifted. However, they intersect where all sisters do- a healthy judgement of their parents, arguments, jealousy, and boys. One boy in particular.

Based on a novel that has withstood the test of time, the film centers around issues that are present no matter the century. There is a decent amount of sass from Aunt March (Meryl Streep) which mimics the same humor as Violet Crawley (Maggie Smith) in Downton Abbey. Seriously, how do we get these two together for a film?! Jo also delivers great quips, “I don’t want your opinion because I don’t like you very much.”

The film as a whole does such a great job of diving into each of the girl’s individual stories as well as their relationships with each other. It is delicate, complex, and sometimes ruthless. Moviegoer Layla wipes away tears at the end, “It was so good. I loved it. It really pulled on my heart strings. Their stories are still so relatable.”

Fun Fact: Although they portray heroines of American literature, none of the four leading ladies are American. Emma Watson and Florence Pugh are English, Saoirse Ronan is Irish, and Eliza Scanlen is Australian.