PAWS of Coronado and Terry Say Thanks 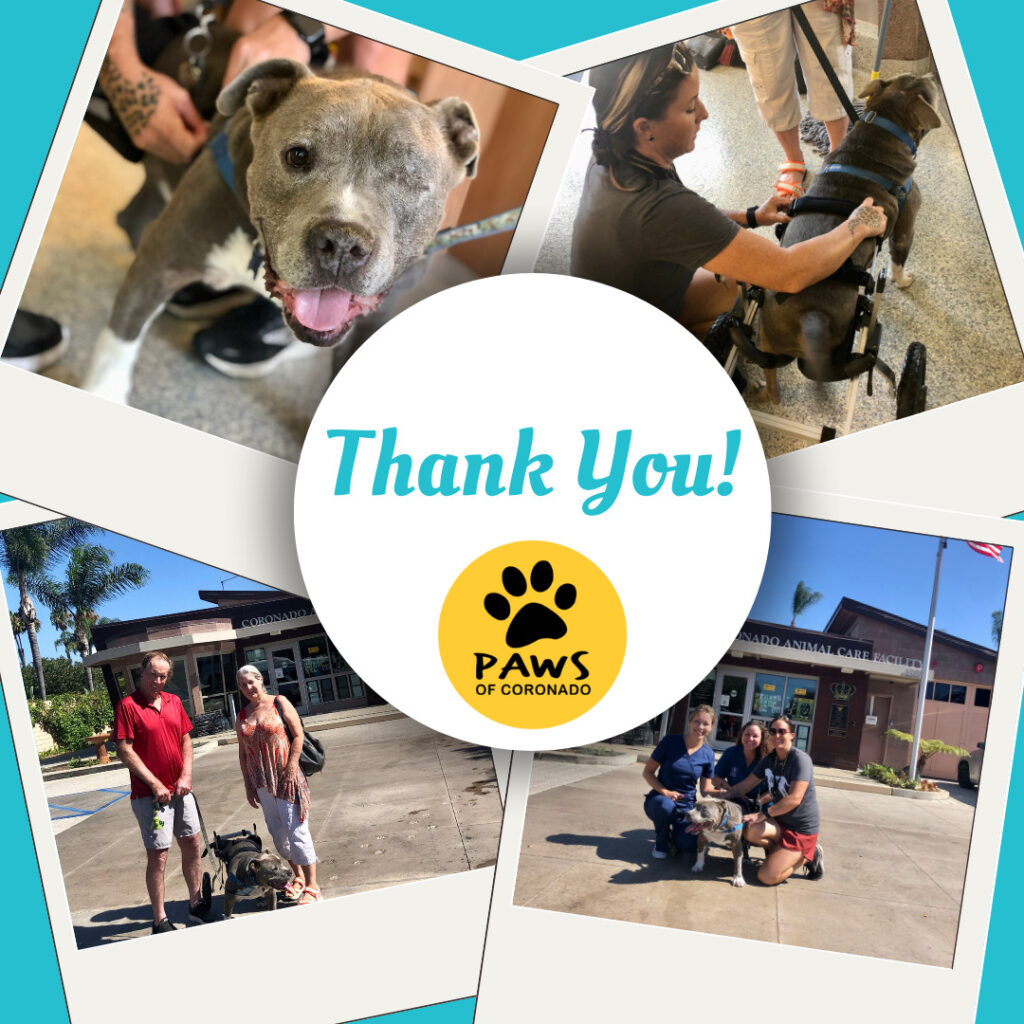 Thank you to all who supported the efforts in getting Terry rolling. Wheelchairs for disabled animals are amazing, but they come with a very large price tag which makes them out of reach for most families and shelters to help support their animals. Thanks to our amazing community of supporters, PAWS was able to make Terry’s days brighter.

This 8-year-old dog, under the care of PAWS of Coronado, was in need of a wheelchair after suffering from an emergency amputation of his right leg. He proved to be a fighter and PAWS staff wanted to get Terry a wheelchair so that could live his best life. With the help of K-9 Carts and our community of supporters, PAWS was able to raise over $1,500 towards getting Terry a wheelchair.

He was fitted with his personalized wheelchair just days after the word got out of this need! “It was great to see the community help in these efforts and see the success story unfold within just a few days,” stated Jennifer Stein, PAWS Sr. Manager of Fund Development. Terry was already a fighter, always smiling and wagging his tail, but now his days are so much brighter as he can, with more ease, continue his favorite daily activity, his walks!

Terry, while currently in foster care, is still available for adoption. Read more about Terry at www.pawsofcoronado.org/terry. You can also help PAWS efforts in animal welfare by donating to support cats and dogs like Terry. Donations can be made online or sent directly to 1395 First Street Coronado, CA 92118.

PAWS of Coronadohttp://www.pawsofcoronado.org
PAWS of Coronado was established in 2003. PAWS manages the Coronado Animal Care Facility and cares for the orphaned cats and dogs of Coronado while they find them their forever homes.

Immerse Yourself in Papercraft Saturday

Pets of the Week: The “Lion King” Kittens

Pet of the Week: Claire, a Terrier Mix for Adoption

Pets of the Week: June & Cash, a Bonded Canine Pair for Adoption