It takes a minute to get past the dreary family dynamics in this comedic drama, but once you do, you’re in for an endearing, memorable romp through working class, 1960s Britain. Not only will you delight in the affable antics of a social-justice vigilante past his prime (or is he?), but you’ll be reminded that people are, for the most part, good. 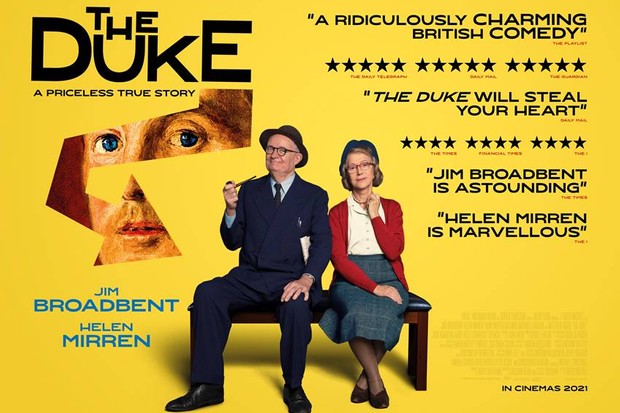 Based on a true(ish) story, The Duke, stars Jim Broadbent, who plays Kempton Bunton, a real-life figure who allegedly stole a famous Goya painting, the Duke of Wellington, from the National Gallery. But he says he didn’t steal it for personal gain; rather, he pilfered the purloined painting, which he calls a “half-baked portrait of a Spanish drunk,” as collateral to bribe his way into social change. Specifically, he argues that seniors and war veterans should not have to pay a “television tax” to watch the BBC, and the 140,000 pounds the British government paid to keep the painting in a museum could have paid for more than 3,000 television licenses to help the most vulnerable people in society.

The film meanders along—with the aid of a snappy jazz soundtrack—between the silly and winsome exploits of Bunton to the unapologetically dismal glimpses into his home life. Helen Mirren plays his wife Dorothy, who’s sour demeanor almost threatens to sink the film, until her fragile anger cracks to reveal a steadfast partner who is eager to see the good in her husband. Bunton’s spirit is contagious and he soon takes up the persona of a winsome underdog; it’s him against the system. When Bunton finally makes it to trial, he’s theatrical and funny, and it’s encouraging to hear him speak of wanting to help others. Why? Because he believes if, given the opportunity, people would do the same for him. It’s just the way it works.

The film is bursting with zesty references that are sure to please the attentive viewer: Robin Hood is the film playing on the TV when we first see it, and Bunton takes a job in a bread factory to win over his wife’s trust and provide monetary stability. But the larger lesson of the story seems to be the need to assume best intentions. Sometimes things aren’t stolen, they are merely borrowed. And sometimes what is gained is far more important.

Rating: R for swearing and a brief sexual scene.

“Everything Everywhere All at Once” Delivers Lavish Whimsy, Depth