This past week, the Islander Boys Varsity Golf Team battled through two grueling matches to stretch their record to 6-1. On Tuesday, March 1, the A Team teed it up at the Rancho Santa Fe Golf Club against Torrey Pines High School. Playing exceptionally long from the tips at 3500 yards, some players struggled to make greens and sink putts.

“Unfortunately we lost, but it was a close match,” Coach Stuart Gordon shared. “We were missing one of our key players, Inigo. Torrey Pines also had the advantage because they had played Rancho Santa Fe before whereas most of our players had never played it.”

Still, the Islanders were able to put up a fight with senior Easton Phillips medaling with a score of 4-over par 40. Sophomore Liam Weaver and senior Jack McLaughlin both carded rounds of 41, and senior Eduardo Maynez shot a 43. Senior Syrak Nemer and freshman standout Diego Vargas rounded out the Islanders with scores of 44. It was a tight match with the Islanders falling to the Falcons by a mere six strokes 203-209, and this first loss ended the five-game winning streak.

On Wednesday, March 2, the JV team faced off against Scripps Ranch at Mission Bay Golf Course. Playing at a par 32, the front nine was 1300 yards from the back tees.

“There were several good performances by a very young team,” Coach Stuart commented.

With a victory of 192-211, freshman Pedro Guiterrez led the Islanders with a score of 3-over par 35. Santiago Fuentes was next with a 37, and Daniel Girault followed with a 38.

On Thursday, March 3, the Varsity B Team battled windy conditions at their home course against Mission Bay. Vargas was the medalist with a round of 3-over par 39, followed by Weaver who carded a 40. Freshman Eduardo Alverez posted a score of 41, and fellow freshman Connor Wray and junior Mateo Sumner both shot 43.

“One of the problems that the players faced that day was putting. I saw a lot of four and three-putts out there, and it was very cold that day,” Coach Stuart shared. 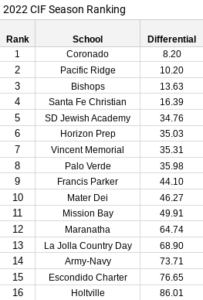 Still, the Islanders easily bested Mission Bay with scores of 206-231, securing their sixth win of the season. Coronado is currently third in the entire San Diego County with a team differential of 8.2. The Islanders are also sitting comfortably atop the Division III leaderboard, which currently hosts 14 schools.

Next week, the varsity team has two matches at their home course of Coronado on Monday, March 7, against Canyon Crest Academy and on Tuesday, March 8, against Morse High School. The boys also have their first league match of the season against La Jolla at Torrey Pines North Course on Wednesday, March 8. To finish the week, the JV team also has a match on Wednesday scheduled at Balboa 9 against Point Loma.