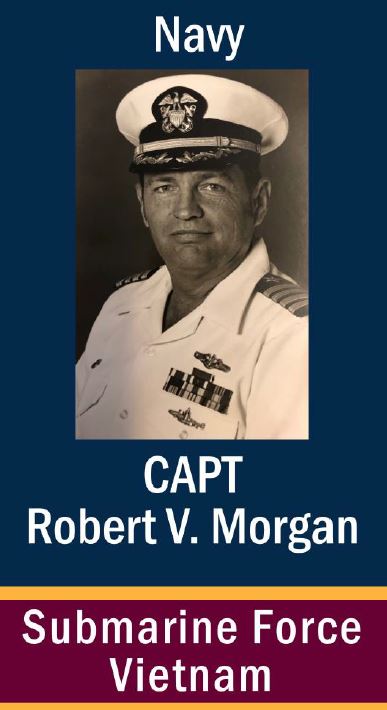 The officers and crew that welcomed CAPT Robert V. Morgan to his major command of USS Orion in La Maddalena, Italy, in the summer of 1984 did so with the fanfare worthy of the namesake pirate himself, “The Captain is coming…”

CAPT Morgan was born in Kansas City, Missouri, in 1937. Upon high school graduation in 1955 with a congressional appointment to the Naval Academy, he graduated in June 1959 as a member of the first company.

After his initial tour on USS Nicholas in Pearl Harbor, he reported for nuclear submarine training in 1961. There he would escort the mother of his future bride to the Officer’s Club. He married Lucille Inez Beebe in 1962.

Upon completion of nuclear power training at Idaho Falls, he served on USS Thomas A. Edison in Scotland for four patrols. In 1965, he was new construction, blue crew engineer and plank owner of USS Marion G. Vallejo. His next tour was executive officer of USS Scamp in San Diego. He made two deployments in the western Pacific during the Vietnam War. He then was the lieutenant commander representative for Pacific Enlisted Personnel.

He became commanding officer of USS George Washington. After a patrol, he combined crews for a refueling at Mare Island, Vallejo, California. He returned to sea as commanding officer. Morgan next served as assistant chief of staff for the commander of Submarine Group Five, San Diego. He rode his bike across Naval Air Station North Island to catch the ferry to Point Loma. His next tour was with director naval warfare, Pentagon where he was awarded the Legion of Merit.

In 1984, he assumed command of USS Orion. During his tour, the ship was awarded Commander in Chief, U.S. Atlantic Fleet Golden Anchor Award. He culminated his tour as commanding officer Point Mugu, California.