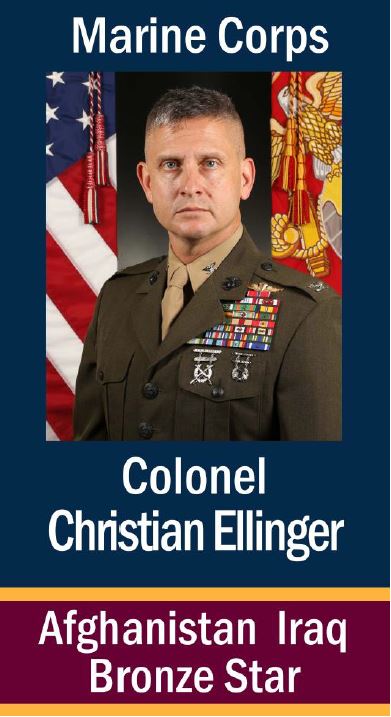 Major Ellinger graduated from the College of Naval Command and Staff in 2006 and was assigned to the Joint War Fighting Center. As a lieutenant colonel, he deployed to Afghanistan with I Marine Expeditionary Force in support of Operation Enduring Freedom. In 2012, LtCol Ellinger rejoined the Cannon Cockers and took command of 2d Battalion, 11th Marines.

After this command tour, he deployed to Afghanistan as the Marine Expeditionary Brigade-Afghanistan fires and effects coordinator and then as the I Marine Expeditionary Force Deputy fires and effects coordinator. In 2015, he reported to Expeditionary Warfare Training Group as director of training. He has been awarded the Bronze Star Medal, Presidential Unit Citation, Combat Action Ribbon, and various personal, unit and campaign awards for combat and meritorious service.

Ellinger is on the board of the Gary Sinise Foundation, San Diego Chapter, which provides critical support to our nation’s defenders, veterans, first responders, and their families. He is in the Optimist Club of Coronado, a life member of the Coronado VFW, and commandant of the Coronado Detachment of the Marine Corps League. He is married to CAPT Jennifer Ellinger, U.S. Navy, of Palm Harbor, Florida. They live in Coronado with their two children.