Centenarian has Zest for Life – 100th Celebration for Beverley Dyer

Feisty, vivacious, glamorous, and bubbly are just a few of the adjectives family used to describe Beverley Dyer, who recently celebrated her 100th birthday with family and dancing at Coronado Retirement Village. She and her husband Louis came to Coronado for semi-retirement in 1978, when they bought one of the first homes in the Coronado Cays.  Beverley travelled extensively around the globe throughout her life, due in part to her Airforce Colonel husband, who was also an L.A. Times editor and publicist for the movie industry.  She often trekked with Louis to movie sets around the world, where they would live for several months during film shoots. The two got to know many of the popular movie stars of the 1960s and 1970s.

In Coronado, she has been an active member of Graham Memorial Church. A trained concert pianist, she often played the piano and sang for church, and still plays the piano at the retirement center. She also volunteered at the church thrift store, and was actively involved with FOCUS assisting with fundraising and helping kids in summer school and after school programs.

Her three children, sons Dion and Dennis, and daughter Deidre, are devoted to their spitfire mom and say she has a zest for life that has kept her going. She has five grandchildren and seven great grandchildren. An elementary teacher by profession, she has authored two books, including God Took My Hand in which she detailed her severe auto accident in Italy and subsequent recovery. She also compiled her unique travel experiences in Faraway Places. 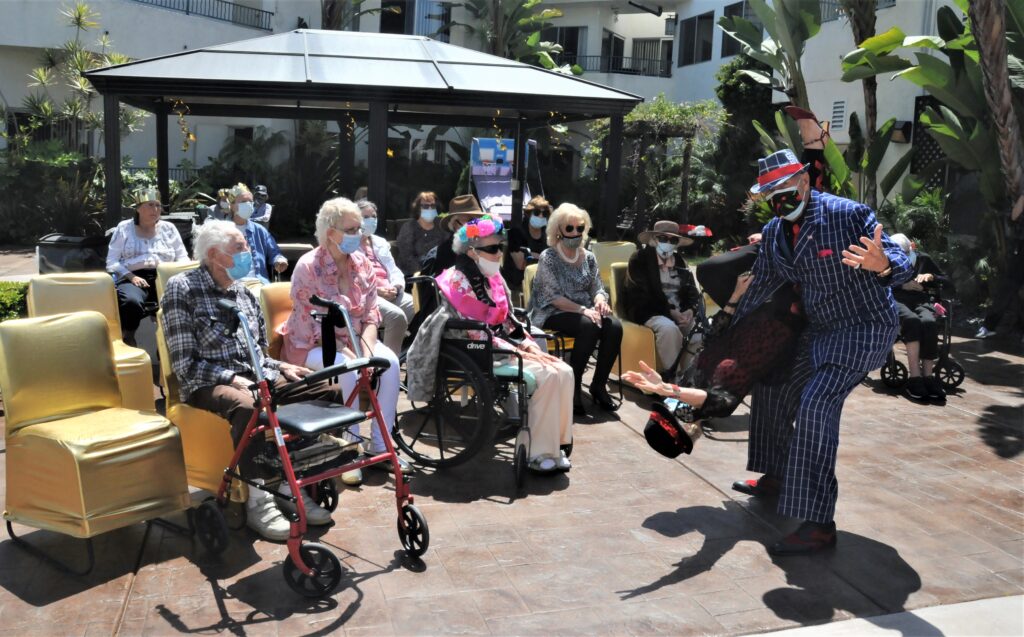 Due to COVID restrictions, Beverley was able to visit with family in a separate outdoor area, and then enjoy an energetic dance routine by professional dancers Les and Donna in another area for her special celebration. She especially enjoyed the dancing, since she and Louis won first place in a dance competition at the Palladium in Los Angeles, back when they were dating, and then belonged to dance clubs through the years.