Not many 11-year-olds can claim they are a published author, but that is just one of the many accomplishments of River Wadleigh, who is now a confident and creative seventh grader. Her book, Buddy’s Story, is dedicated to all the shelter animals still waiting for a forever home.

River’s story starts in Germany where she was born, and where when she was seven, her family was considering a guinea pig for a family pet, but ultimately ended up with their lovable dog Benny who had been rescued from a Hungarian shelter. When the family moved to Coronado to be closer to family — River’s father John grew up in Coronado, CHS class of ’91 and his parents still live here (locals may remember his mom Rita, who managed Kippys for many years) — naturally, Benny came with them. Benny’s life in Coronado was filled with River spending lots of time training her beloved dog to do tricks and obstacle courses.

When River was in fourth grade, she remembers her teacher talking about writing and that’s when River took out her notebook and began writing the story of Benny, who she named Buddy in the book. She continued to write each day in secret until the story was complete, then she typed it and showed it to her parents. They were so impressed that they set about finding a way to turn it into a real book. “My dad made it happen,” says River.

John said that it took lots of research and they found the website Fiverr where you can connect with freelance artists from all over the world; you request the type of art and number of images you want and freelance artists bid on the job. River selected the art she liked and for a nominal fee they received illustrations for the soon-to-be book. River said that “now, I could totally do the illustrations myself, because I love art so much.” Nowadays she shares her creativity more through art than writing; she especially enjoys painting and sketching with pencils.

They first printed a run of 50 copies of the book, which quickly sold out to family and friends, and have now done a second printing. The book can be found locally at Bay Books and also on Amazon. As a proud dad, when they went to the bookstore, John found her book in the back and asked the bookseller if they could move it up front to the local author section. They happily obliged and even had River autograph copies. There are also copies in the schools’ libraries and at the Coronado Public Library.

As a fifth grader, River enjoyed reading her book to the first and second graders. “It made me feel special,” she recalls. She has also participated in several of the Coronado Library’s Indie Author Days. 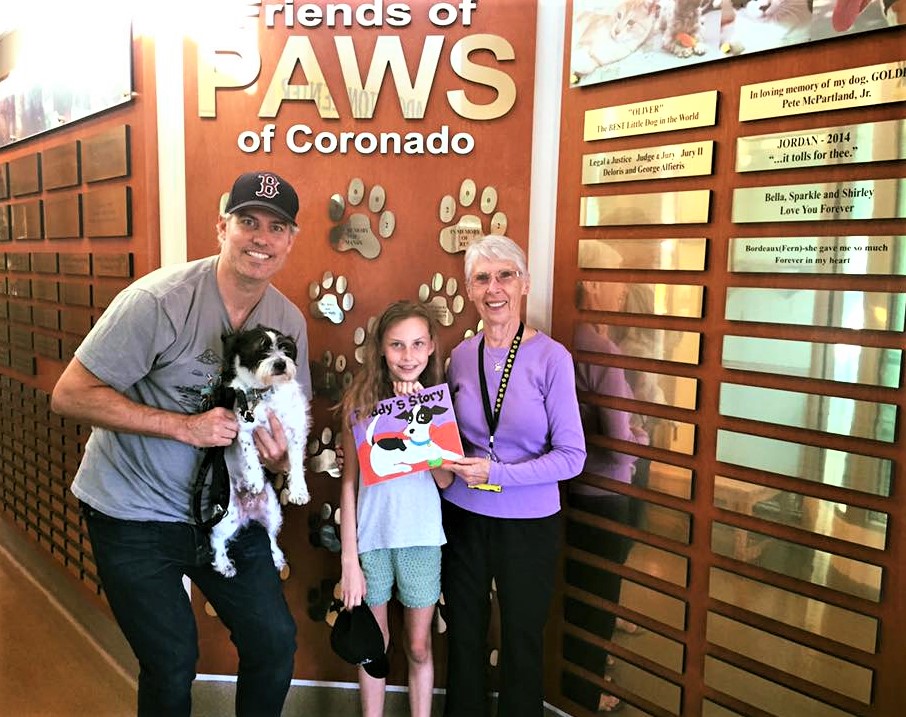 With a love for all animals, River is donating a portion of the proceeds from her book sales to PAWS of Coronado. Her mom Nicole volunteers at both PAWS and the San Diego Humane Society, and River hopes to be able to accompany her as soon as she is old enough. For now, she is content walking Buddy, training him to do more tricks and feeding him his favorite foods like cheese and meat. With a picky palette, she says he will only eat popcorn with butter on movie nights.

An avid reader, River said she was inspired by the W. Bruce Cameron books and wanted to share the tale of her special dog. When asked why she changed the dog’s name in the book to Buddy and the main character to a boy, she and her father laughed and said, “to protect the names of the innocent.”

Coronado Community Church Announces New Pastor The term, “Church without a building,” is not uncommon in Coronado. At last count there were four such non-denominational places...
Read more