Coronado High School has a proud history of sending graduates to top colleges and universities. As the CHS class of 2021 starts their senior year they will also be working on their college applications. College applications typically include: student grades, personal essays, letters of recommendation, and standardized tests scores. However, like most aspects of life, the Coronavirus pandemic is impacting the college application process as many colleges have made their admissions test-optional.

The SAT and ACT tests are administered by the College Board and ACT organizations that offer tests to millions of students on seven dates throughout the year. Starting in March 2020, COVID-19 caused SAT and ACT test dates to be either cancelled or postponed making it very difficult for students to take the tests. Giana Matranga shared, “I tried to take the SAT in March and it got cancelled the day before due to COVID-19. Since that was the first test I was going to take as a benchmark, I do not have any other SAT/ACT scores to submit to colleges.”

In response to these testing challenges, many colleges and universities announced they were dropping the SAT and ACT application requirement for the high school class of 2021. In April 2020 the prestigious University of California (UC) schools announced they were suspending SAT and ACT requirements until fall 2024. Starting 2025, the UCs plan to offer their own standardized test to replace the SAT and ACT. Lauren Griffin mentioned, “I was both concerned and relieved because it took off the pressure of having to study for the tests while everything is going on. I have no idea what the UC test will look like to be honest!”

Other well known colleges such as CalTech, Duke, Harvard, MIT, Stanford, and Yale along with top liberal arts colleges such as Middlebury, Pomona, and Wellesley have also waived the test requirement for this year’s applicants. As of August 2020, over 1,450 schools around the United States are not requiring applicants to submit standardized test scores. These test-optional schools are different from the small number of test-blind schools that will not accept any standardized test scores. At test optional schools, students who are able to take the test can still submit their test scores for consideration, while students without test scores will not be penalized.

Standardized tests have plenty of critics. Both the SAT and ACT charge students between $50 and $70 to take the tests. Students that want to improve their test score will often take the test two or three times paying the test fee each time. Numerous businesses such as The Princeton Review cater to high school students by offering test preparation courses and tutoring that can cost thousands of dollars. Out of the millions of students that take the SAT and ACT every year, only a minority can afford test preparation which adds a financial obstacle to getting higher test scores. The National Center for Fair and Open Testing is a vocal critic of standardized tests stating that “the SAT remains a more accurate measure of a test-taker’s family background than of an applicant’s capacity to do college level work.”

The College Board has scheduled multiple SAT and ACT test dates through May 2021 with the hopes that students will be able to take the tests going forward. In the meantime, Coronado High School students will continue working on the other parts of their college applications so they can be pleasantly surprised during the spring season of college acceptances.

Related: The Coronado Public Library is hosting a virtual talk on “College Admissions During COVID-19” on September 15. 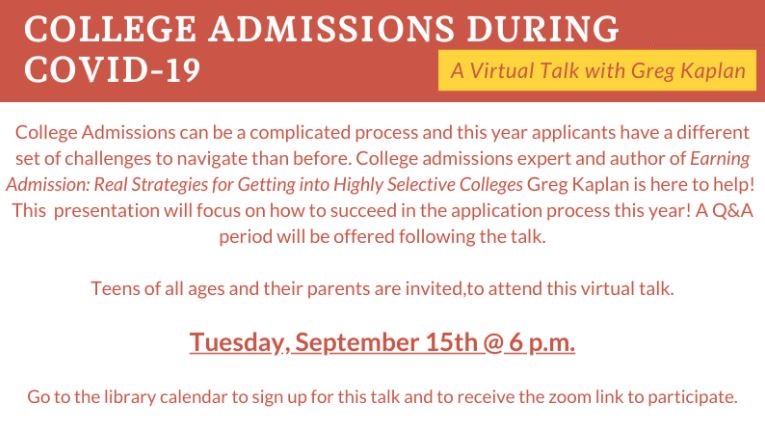 It is with great pleasure and enthusiasm that I announce the selection of Ms. Karin Mellina as the next principal of Coronado High School!After...
Read more
Education

While the Annual Coronado Junior Woman’s Club Awards Luncheon did not take place due to Covid-19, the club would like to recognize the 2021...
Read more

Local community organization InclusioNado has spent the past year working to build awareness, acceptance, and action towards greater inclusion in Coronado schools. After the...
Read more
Advertisement
Sponsored Partner Links