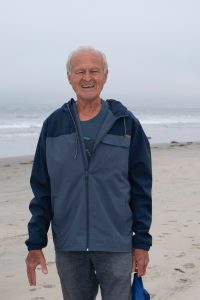 Lifeguard Captain Sean Carey was pleased to have Stan Kirkpatrick named as the Emerald Keeper of the Month. Carey said, “We call him “The Stanimal” because he is out here every morning cleaning the beach. I asked him if he wanted a pick-up stick, but he told me he gets more exercise without one.”

Stan Kirkpatrick has made an impact on both the cleanliness of the beach and the beach lifeguards. Carey explained, “Stan is an inspiration.”

According to Stan, he has cleaned the beach for the past six years. “I usually go out every morning around 8 o’clock. I carry a reusable bag and clean the beach.”

Over the years, Stan has seen improvements on the beach. “Since the City got the green sweeper, the beach is much cleaner. It does a great job, so there isn’t as much trash as there once was.”

Stan has developed friendships with the lifeguards and the drivers of the green sweeper. People who walk the beach regularly in the morning know him as the “guy who cleans the beach.”

“I pick up trash on the beach because I think it is the thing to do,” explained Stan. “While I am out here walking, why not pick up trash?”

WHY NOT? Thank you, Stan Kirkpatrick, for inspiring us all and congratulations on being the Emerald Keeper of the Month.

If you know of a deserving Emerald Keeper, email [email protected]