Editor’s Note: This article was first written in 1992 by Stephen Williams and he granted permission to run it in The Coronado Times. It was sent in by John O’Brien and after almost 30 years, these words are still relevant, especially during these trying economic times.

Note from the author, Stephen Williams:

“I wrote the Pink Slip back in 1992 during the meltdown of the Savings and Loan crisis which hit downtown San Diego quite hard. We had just started our real estate company a few years earlier. The S&L crisis was caused by volatile interest rates and eliminated 1/3 of the nation’s 3,000 S&L’s for a cost of $160 billion.

Although we didn’t know it back then, it was the dawn of the Internet Age and strong economic growth was ahead. Today, we are facing a global crisis caused by COVID-19 pathogens coming in from China. It is too early to know the total costs of American lives and livelihoods.

I still believe we are among the luckiest people ever…to be living in San Diego. I also believe, like back then, it is hard to see the road ahead. Finally, I am confident that our next generation of entrepreneurs will point us in the right direction.”

The “pink slip” is changing America.  As the economy continues to deteriorate, corporations will continue to “downsize” and the ranks of those having to become entrepreneurs will swell. Not since the Great Depression has there been such a concern over jobs and the economy!

The “pink slip” is changing San Diego too.  Three of our largest financial institutions (Great American, HomeFed and Imperial Savings) have been taken over by the federal government in the past few years and subsequently closed down. Many talented people have been “pink slipped” and the ripple effect is now continuing as the accounting, legal and other professional firms scale back as a result.

The “pink slip,” like medicine, is good news.  It will take change to change us, and this change comes in the form of the “pink slip.”  Like Adam Smith’s “invisible hand,” the pink slip is working to strengthen our economy by reducing our “corpocracy” and enabling us to compete in the global economy. Yesterday’s executives are becoming tomorrow’s entrepreneurs, and this is the good news for San Diego and America too.

Nothing on earth is more powerful than a good idea.  This is a quote from Dr. Norman Vincent Peale in his book, The Power of Positive Thinking. To my friends who are worried about their jobs or about the economy or about their future, it is time to read this book again. Just for a moment consider the young man born about the turn of this century who was on the verge of bankruptcy for the second time in his early twenties when he had the idea to draw a mouse … and name it Mickey! That was a powerful (and profitable) idea.

San Diego has many good ideas.  San Diego’s greatest wealth lies not in the few remaining banks in town, but in the brains of its people. Just think of all the good ideas in the thousands of minds that will get launched shortly, right here in San Diego, because of the “pink slip.” Just consider the success of UCSD’s CONNECT and its technology transfer program as a base and then add the dynamic of motivated under-employed people and watch new company formations skyrocket.

San Diego is the entrepreneurial capital of America and we don’t know it.  We all know that San Diego is small business. In fact, as the nation’s sixth largest city, San Diego is not even in the major leagues when it comes to big business or being a corporate headquarters location. In fact, as our big businesses shrink, our small businesses sprout. I believe that we are the entrepreneurial capital of America and we now have the opportunity to increase our lead.

Entrepreneurs innovate.  So says Peter Drucker in his book Innovation and Entrepreneurship. In fact, he says that “Innovation is the specific tool of entrepreneurs … Entrepreneurs see change as the norm and as healthy. The entrepreneur always searches for change, responds to it, and exploits it as an opportunity.”

Entrepreneurs love what they do.  Too often today, people confuse “what they can do” with “what they want to do.” Many hate their jobs, but are unwilling to give them up. Socrates told us a long time ago to know ourselves, to do what we enjoy and as a result, we will do it well. “Pink-slipped” people who become entrepreneurs will have the opportunity to do what they love.

Entrepreneurs care.  Some people call it “caring capitalism.” To taste an example of it in action, just stop at any Ben and Jerry’s for an ice cream cone. You’ll enjoy the taste and you’ll see the mission statement. Caring capitalism works.

“Entrepreneurs are more likely to find inspiration in a ‘pink slip’ than in a promotion.”  So says George Gilder in his book Recapturing the Spirit of Enterprise. He goes on to say that “the same spirit of enterprise – the impulse to freedom and self-governance – that animates people to originate bold new products and services, to devote the fruits of their talents, energies and acumen to improving the material well-being of their fellows, also guides their engagement in the other workings of society.”

There has never been a better time to be in San Diego.  Just think about it. Our timing is such that we are going into the Pacific Century and the new millennium. Our longitude and latitude is such that we are on the “right” side of the Pacific Rim, where the First World meets the Third World. What better time and place to live in the whole history of mankind than right now, right here …in San Diego!

Yes, the “pink slip” is changing America …and San Diego too! 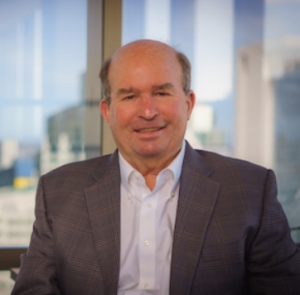 Stephen Williams, Founding Principal at SENTRE, focuses on new clients, new concepts and new ideas. He developed a relationship with GE Pension Trust, which together with SENTRE became a major stakeholder in downtown San Diego. Steve sits on the company’s Board of Directors and Investment Committee. Steve also co-founded Vesta with Lorenzo Berho. Incorporated in 1997, Vesta is a Mexican industrial real estate fund, with approximately 25 million square feet of leased industrial properties located throughout Mexico.

Steve is a co-founder of Bandwidth Now which transforms commercial buildings into “next gen” environments, treating bandwidth as a utility and Wi-Fi as an amenity using its patent pending Building Optical Network (BON). Bandwidth Now and SENTRE were nominated by Intel for the Computerworld Honors Program’s 21st Century Achievement Award.

Chamber Executive Director Weighs in on Local Business During Coronavirus

Nearly four months into Coronado businesses battling the coronavirus pandemic fallout, checking in with the Chamber of Commerce provided some insight into what it’s...
Read more
Business

As a result of COVID-19, the importance of mental heath has come to the forefront as an important aspect of maintaining resilience within our...
Read more

Details of this incident were published by the Coronado Police Department via their Facebook page:At 10:47 am morning, we received several 9-1-1 calls...
Read more
People

Coronado's John Weisbarth catches up with local waterman, Dan Mann, to explore how water shapes his work as well as his life.  This short...
Read more
Advertisement
Advertise Here (Get Rates)