As today is the 50th Anniversary of Chicano Park, it feels important to take a look at the incredible history of the Park under the Bridge. Now considered a National Historic Monument, and part of California’s Cultural Districts, the Park started, rather humbly, as a construction site.

Chicano Park is inextricably tied to the dislocation of families and businesses that affected the Logan Heights community in the 1960s due to two major construction projects: Interstate 5 and the Coronado Bay Bridge. Interstate 5 bisected the community, creating the distinction between today’s Barrio Logan and Logan Heights communities. The Coronado Bridge and its companion offramps further displaced families and businesses by adding incredible levels of construction to the neighborhood, and at the end of construction, left a large blank underpass space in its wake.

The Chicano population dwindled as the construction continued. Once completed, community leaders wanted to restore some of the neighborhood’s pride and reinvigorate the sense of community that had been severely damaged during the construction projects. 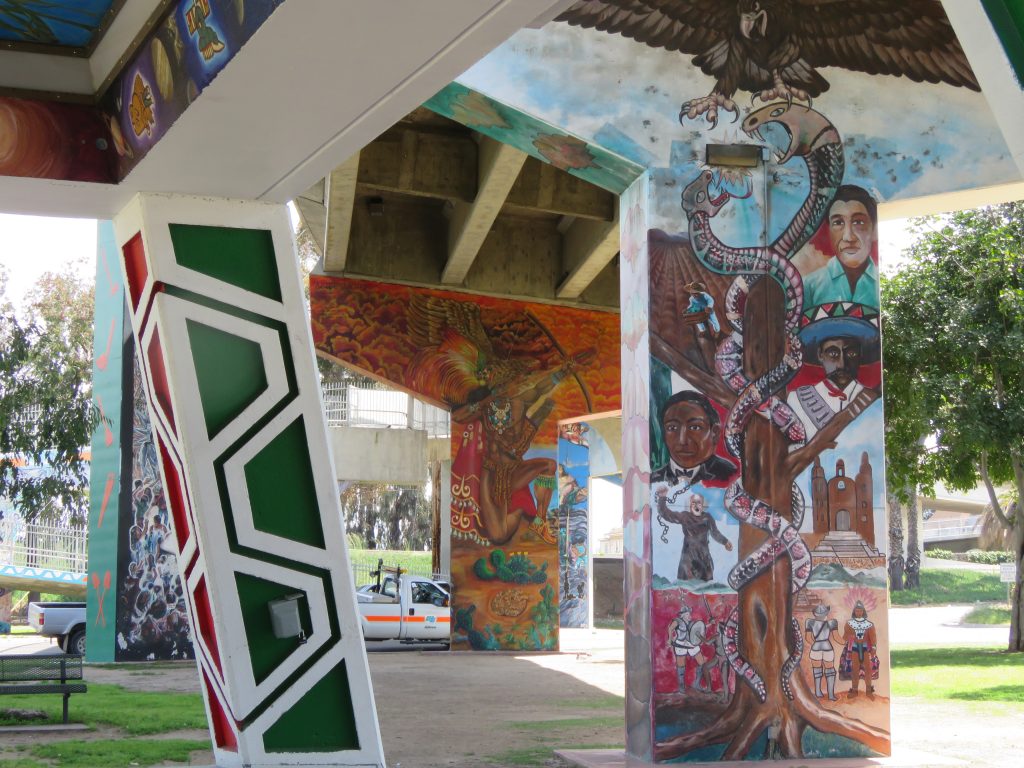 They set their sights on the empty parcel of land under the bridge with the hope of creating a public park.

After several years of negotiation with the City Council, a land-use agreement for the creation of a public park in the space was signed. However, the City took no action to move forward with the creation of the Park for several months and the space sat undeveloped. In this vacuum of activity from the City, the State of California brought in bulldozers to prepare the space for a California Highway Patrol station.

Residents and community leaders reacted strongly to what they saw as a betrayal of the original agreement and of their trust. On April 22, 1970, they formed human chains around the bulldozers, raised the Chicano flag on a telephone pole, planted cactus and flowers, and laid claim to the Park for what would be a 12-day occupation. The Chicano Park Steering Committee was formed a few days into the occupation in order to help the community 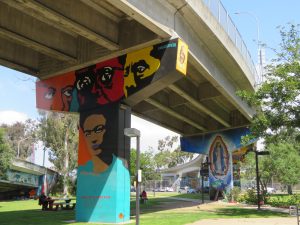 direct its energy (they still serve as the Park’s stewards today). This occupation, alongside the protests of hundreds of community members who spoke out, led to a new agreement that moved the slated Highway Patrol Station to a different location and allowed the community Park to move forward as previously promised.

Adding the now iconic murals, or public art, to the support beams of the bridge took another several years of negotiations and the persistence of dedicated founding artists like Salvador Torres and Victor Ochoa who planned out mural phases and, with community involvement, began to add color to concrete in 1973. Ochoa described the goals of the murals, “Since the early ’70s the themes and concepts evolved from the issues in the community, immigration has been one of the issues since the beginning, along with racism, police brutality, bilingual education, the farmworkers, our indigenous heritage, gentrification, the 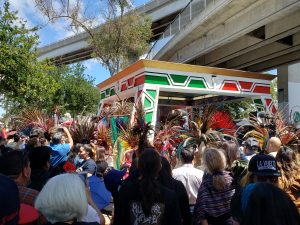 gender issue, examples of our heroes or important people both from Mexican or Chicano history.” The Community considers the Park a visual representation of its struggles, its celebrations, and its rich culture.

In 1980, the Park was designated a San Diego Historical Site (#143) despite having been largely ignored by the City of San Diego up until that point. This designation not only boosted the significance and revitalization of the Park, but allowed the community to finally feel recognized. Another boost came in 2018 when The Chicano Park Museum and Cultural Center received a lease from the City of San Diego for a space located adjacent to the Park (it is scheduled to open later this year) in order to create a museum for the Park’s unique history.

Chicano Park Day began in 1971 to commemorate the initial park occupation the year before and to celebrate the preservation of the community’s culture as well as neighborhood pride. The celebration grows larger every year with cultural dances, vendors, live music, and blessings. Individuals come to Barrio Logan from all over to celebrate and swap stories. COVID-19 has delayed this year’s big 50-year celebration, however the Chicano Park Steering Committee is hosting a week of virtual commemoration on their Facebook page so that the communities of Barrio Logan and Logan Heights will still be able to celebrate the strength and perseverance of their community, culture, and beloved Park. 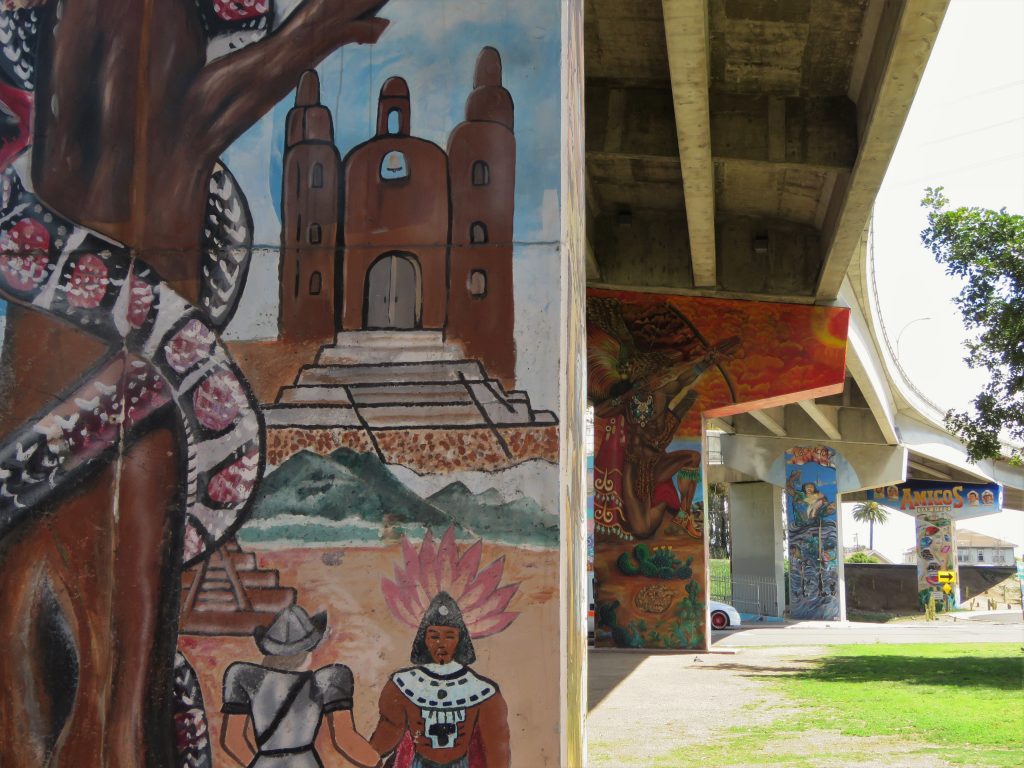 Carolyn Osorio
Carolyn has a BFA in Theory, Criticism, and History of Art and Design from Pratt Institute in Brooklyn and has worked in communications for a variety of arts and culture organizations in both New York and San Diego.In addition to consulting and serving on the Rising Arts Leaders Steering Committee, Carolyn curates a public art project, the Mint House Project, which presents local mural artists. She lives just over the water in Barrio Logan where she enjoys views of the Coronado bridge from her backyard. In her spare time, she can be found at Dog Beach with one (or both) of her Great Danes.Have a story for The Coronado Times to cover? Send news tips or story ideas to: manager@coronadotimes.com