Chicano Park, the vibrantly painted park under the Coronado Bridge, is adding a new mural to its impressive visual collection. The project, headed by Chicano Park founding mural artist Victor Ochoa, is dedicated to Anastasio Hernández Rojas, a longtime San Diego resident and undocumented immigrant who died as a result of an altercation with Border Patrol at the San Ysidro border crossing in 2010.

The mural is being created in partnership with Alliance San Diego, American Friends Service Committee (AFSC), and Hernández Rojas’s family and boasts an incredible roster of mural artists including Mario Chacon, Cindy Rocha, Gloria Favela Rocha, Eduardo Parra, Graham Hajosy, Irma Patricia Aguayo and Eric de La Rosa. It is dedicated not only to honoring the life of Hernández Rojas but also to raising awareness of others who have died as a result of altercations with Border Patrol. Ochoa described the process of getting the mural started, “AFSC originally approached me, and I was overjoyed by the opportunity. We worked on the concept with my team of students that met Maria Puga, Anastasio’s widow, and immediately responded with a deep emotional and spiritual bonding that really gave this project a punch of reality.”

Alongside the image of Hernández Rojas will be images of children who have died while in immigration custody, families trying to cross the border, and even a Xoloitzcuintli dog, which culturally serves as a spirit guide to the afterlife. As the child of undocumented immigrants himself, Ochoa feels a personal connection to the topic of immigration but also emphasized the mural’s meaning to the community, “The murals at the park act as open books of truth that we do not have yet in the media or in libraries. Even though it’s been ten years since his murder, we needed this, not only to remind us of this tragedy but to bolster the struggle we are enduring, not only that of Anastasio’s family and lawyers but of the continual turmoil the greater community is under.”

While it might be easier to discount Hernández Rojas’s story as a singular incident, his family is determined to keep his story alive for future generations. Their fight was bolstered by the original San Diego County Medical Examiner’s classification of Hernández Rojas’s death as a homicide in addition to video that recorded the fatal altercation. Hernández Rojas’s family focused on accountability and their persistence led his case to be heard by the Inter-American Commission on Human Rights (IACHR), the first case of its kind opened against the United States. Despite the Justice Department declining to pursue charges against the involved officers in 2015, the U.S. Government eventually settled the case with Hernández Rojas’s family for $1 million in 2017.

The mural project is currently still fundraising to cover the costs of an installation of this size. Ochoa explained, “Just the cost of the scaffolding is $9,500 for the 4+ month period of painting. There are many costs in materials and equipment including a storage container, washbasin, fencing, the best 50-year durability pigments and varnishes, and an anti-graffiti guard. We also needed to install a gutter to protect the mural from water damage from the top of the bridge.”

While Ochoa’s original plan was to have the new mural finished in May for the 10 year anniversary of Hernández Rojas’s death, the current COVID-19 pandemic has halted the installation process, adding to installation expenses. 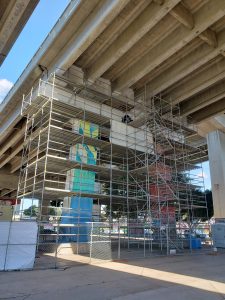 Once installation continues, the mural will offer a unique opportunity for the public to witness how a Chicano Park mural is created, painted, and worked on by some of the greatest living artists in San Diego.

Carolyn Osorio
Carolyn has a BFA in Theory, Criticism, and History of Art and Design from Pratt Institute in Brooklyn and has worked in communications for a variety of arts and culture organizations in both New York and San Diego.In addition to consulting and serving on the Rising Arts Leaders Steering Committee, Carolyn curates a public art project, the Mint House Project, which presents local mural artists. She lives just over the water in Barrio Logan where she enjoys views of the Coronado bridge from her backyard. In her spare time, she can be found at Dog Beach with one (or both) of her Great Danes.Have a story for The Coronado Times to cover? Send news tips or story ideas to: manager@coronadotimes.com

MEMORIAL DAY SERVICES RETURN TO STAR PARK, MAY 31 By Joe DitlerMemorial Day has never been taken lightly by Coronado residents. It always carries with it...
Read more
Community

As today is the 50th Anniversary of Chicano Park, it feels important to take a look at the incredible history of the Park under...
Read more
Entertainment

A few days before the COVID-19 pandemic erupted into grocery store raids, toilet-paper memes, and overall panic I had made the very big decision...
Read more
Advertisement
Sponsored Partner Links