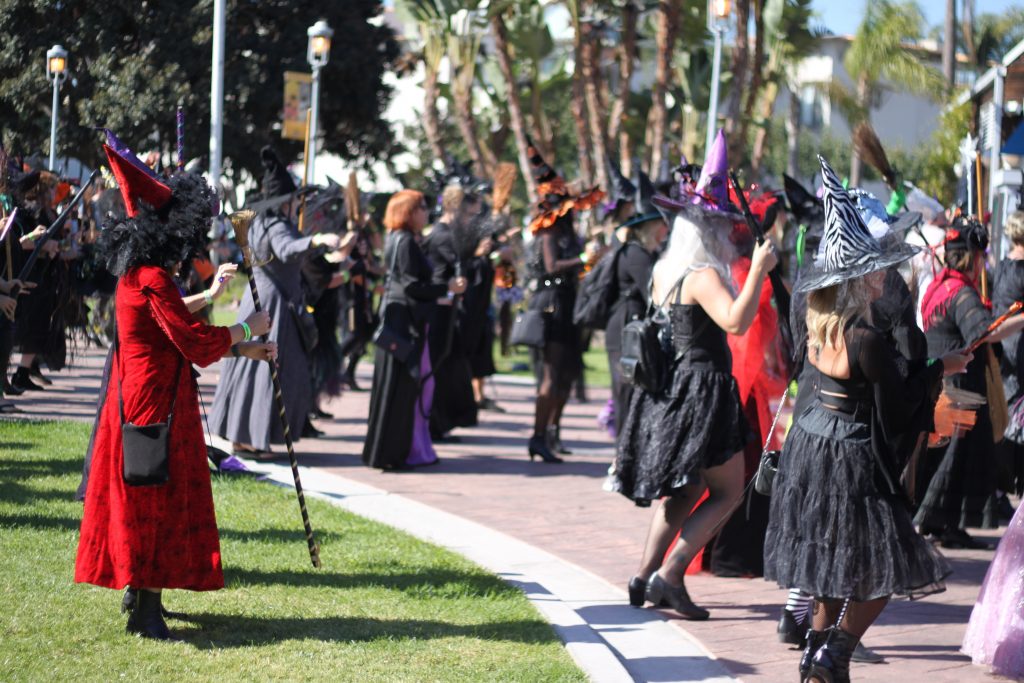 Three years ago, when attending my daughter’s soccer game at Tidelands Park, I remember spying a woman dressed in Puritan clothing with blood splattered all over her apron and her hair neatly tucked away in a white bonnet.

Then, out of nowhere, streamed a group of women clad in flowing black smocks with shades of purple—all wearing pointy black hats.


Mesmerized, I vowed that next year I would be part of the best-kept secret on the island—the Coronado Witches’ Tea. And so mote it be! I am now a two-year veteran witch.

As the folklore goes, Rebecca Geiss sent a cryptic invitation to eight of her closest friends asking them to dress as a witch and meet at the Old Town Trolley Station at 3 pm sharp on All Hallow’s Eve. What started as an intimate celebration of the holiday has become a Coronado tradition. Six of the nine original witches were in attendance this year.

Now held annually on the Saturday before Halloween, this year’s event marked the 20th anniversary of the all-female (aged 21 and over) coven of witches boasting 250 broomriders.

Instead of invitations, this autumn affair travels by word of mouth and sold out before ticket sales went online–a testament to its reputation. While many attendees are local, witches as far as Washington DC, Connecticut, Oregon, Idaho, and Arizona flew in for the afternoon festivities.

Funds were raised for Team Quinn, a non-profit organization serving people with disabilities or disabling conditions and their families through adaptive surf programs, blood drive sponsorships, and purchasing monthly community meals for the Ronald McDonald House in San Diego. On November 2nd, Team Quinn will hold an Adaptive Surf and Assisted Yoga Session in Coronado.

Inspired by Quinn Waitley, an identical quadruplet and adaptive athlete born with spastic Cerebral Palsy, Geiss discovered the organization through a friend while on a road trip. Touched by Waitley’s story, she decided to support Team Quinn for this year’s Witches’ Tea.

In 2018, Geiss partnered with the C4 Foundation that provides support and resources through science-based programs to active duty Navy SEALs and their families. She hopes to spread awareness and raise funds for different non-profits at future events.

Geiss singlehandedly planned this year’s agenda and donated transportation costs. But she “couldn’t have done it without the loving support of her husband and son who manage the behind the scenes logistics.” Since the event has grown in popularity, Geiss hopes to form a planning committee in 2020 to alleviate some of the toiling.

As any good witch knows, this event is more than just a bunch of women dressing in costumes. Geiss describes the Witches’ Tea as a “generational tradition” with mothers bringing their now-grown daughters to revel in the day.

It’s also liberating to be in the presence of so many women of all ages and backgrounds in the spirit of celebration. The atmosphere is simply electrifying.

And much like the Kentucky Derby–it’s all about the creative and crafty headpieces.

Shroud in secrecy, witches are only told where to meet and to bring a broom. A flash mob practice video was sent weeks prior with choreographer, Sue-Allen Villalva, donating her time to teach the spellbinding moves before the big reveal last Saturday.

This year’s agenda began at the Coronado Ferry Landing with hundreds of witches dancing to “Jump in the Line (Shake Señora).” Afterward, we hopped on our broomsticks (four double-decker buses owned by the British Bus Company) and flew over the bridge to The Shout House. Women were singing and dancing to “The Time Warp” and other tunes, while Geiss was serenaded with an original birthday song by one of the dueling piano players.

“Virgin” witch (a term used for a newbie) and longtime Coronado resident, Liz Bruhin, spoke on her excitement about joining the coven ranks and engaging in some boisterous behavior that is “rumored to occur” on these little jaunts.

“I hear crazy things happen at these events.”

The next stop took us to Bali Hai on Shelter Island and witches were warned “not to drink the Mai Tais,” known for their intoxicating ingredients. At the bayside restaurant, “tea time” consisted of tomato basil soup, mandarin salad with beet dressing, and chicken sandwiches.

We returned to Coronado where witches reunited with family members at the Mexican Village and danced the waning afternoon hours away to music provided by IT’S NEVER 2L8 band who volunteered their time for the event. Geiss described how accommodating the Mexican Village management was due to a last minute change in the agenda.

“They removed tables to open up the dance floor for us and rearranged the bar area to allow for more witches to roam. They were very generous and helpful.”

Gretchen Barksdale, a returning witch, described the women-only event as a moment “to be free from the societal expectations of being wife, mother, proper, ladylike, and whatever else a ‘good woman’ is supposed to be, and be wildly woman. Even if it’s for one afternoon, it’s worth the yearly wait.”

Swimming is the common denominator in the lives of Dani Grady and Nancy Blair, who are childhood friends and a professional synchronized swimming duo....
Read more
Business

For Rena Clancy, it started when she was just three years old. That's when her father died and her mother was left to raise...
Read more
People

It only happens once a year and this was my husband's and my first time to experience Coronado Rotary Club's Low Tide Ride &...
Read more

Just in time for the Thanksgiving holidays, Frozen 2 serves up quite the cinematic feast for Disney audiences. Pumpkins, golden-hued leaves, and pink skies brush across...
Read more
Travel

Winter is coming.So it might be time to lace up your hiking boots, pack up your camping gear, and head for…the desert.About 90 miles...
Read more
Community News

November is National Aviation History Month and The Coronado Times is taking a look at some of the places, planes, and people chronicling the...
Read more
Advertisement
Sponsored Partner Links

A Look at School Achievement in the United States, California, and Coronado Unified School District

Public Apology to CUSD Board, board meeting attendees, residents of Coronado and students