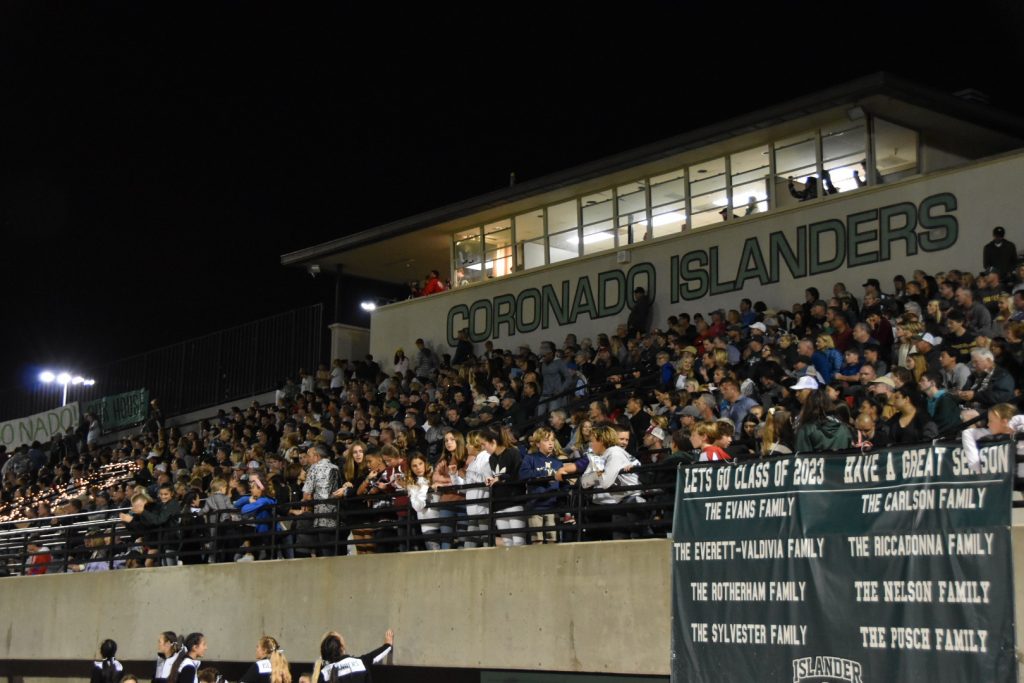 The people of Coronado packed the stands at Niedermeyer Field for Islander football’s 6:30pm start against the Crawford Colts on Friday evening. The last time these teams met, Coronado handled the Colts with an easy shutout, the final score being 32-0. This game was much different due to errors by the Islanders in the first half. Coach Hines commented, “We were slow out of the gate, and very undisciplined in the first half.” At the half, the score was tied up 13 all.

The game was like a chess match, back and forth between the sides and very strategic. During halftime, the homecoming candidates were welcomed on the field before the announcement of the homecoming king and queen. Cole Mullins adjusted the crown above his head as he celebrated with his mother and then awaited the decision of homecoming queen next to his partner, Zoe Hosley, who was elated when the announcer called her name as the homecoming queen.

Going into the second half, Coach Hines used all of his arsenal. Senior Devin Schulte went off and led his team in five sections:

The Islanders were behind with just six minutes left in the game, and it took a lot of courage and showed a lot of character to fight back for the win. With only seconds on the clock junior quarterback Brady Roulier ran in for the game-winning touchdown. The crowd went wild. In cheerful spirit, the fans shared favorite moments as they exited Niedermeyer Field. You almost had to be there to believe it.

Joseph Williamson
Joseph and his family moved from Chula Vista to Coronado during elementary school. He immediately acclimatized by picking up surfing on his first day on the "island". When not covering CHS Sports, he enjoys surfing, skateboarding and making skate videos with his friends. Joseph is a Digital Art Student in CoSA and loves to travel. Have a story for The Coronado Times to cover? Send news tips or story ideas to: manager@coronadotimes.com

February 11th: The girls varsity soccer team traveled to Clairemont High School and with an outstanding performance the final score was a 2-0 win...
Read more
Sports

February 18th: On Tuesday, the Islanders played at home against San Dieguito Academy for the first round of playoffs for CIF San Diego Section...
Read more
Sports