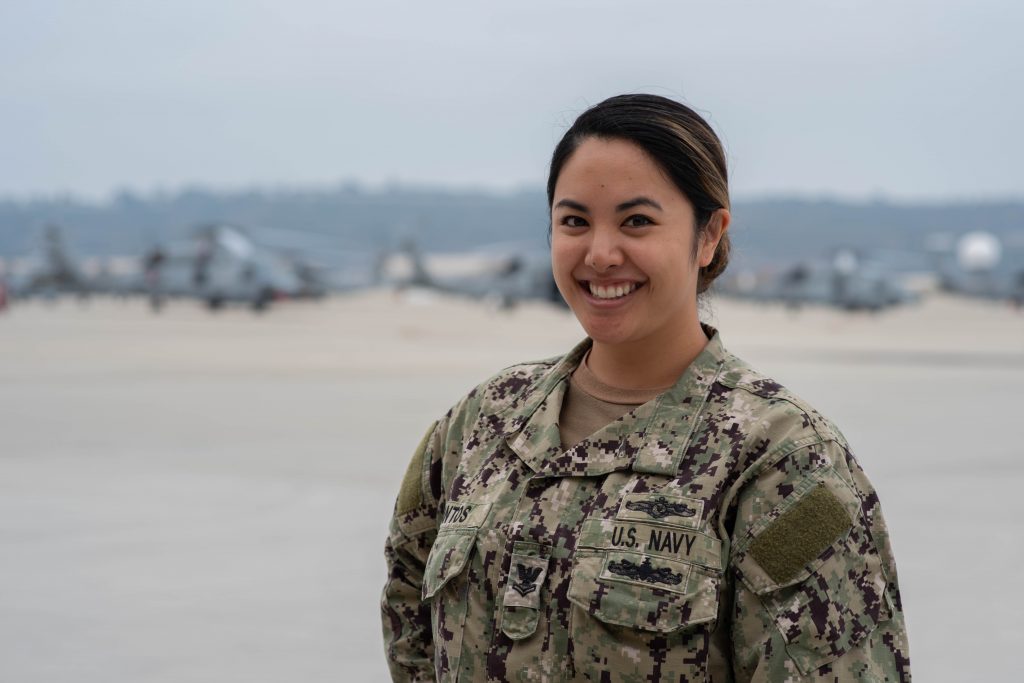 “I enjoy working here,” Santos said. “I feel relaxed. I have time to do work and to do everything I need to do personally and professionally.”

Santos, a 2009 graduate of Otay Ranch High School, is an information systems technician with HSM 49, a versatile squadron that’s capable of completing a number of important missions for the Navy with the MH-60R “Seahawk” helicopter.

Santos credits success in the Navy to many of the lessons learned in Chula Vista.

“I learned patience growing up which has helped me a lot in the Navy,” said Santos.

HSM 49’s primary mission is to conduct sea control operations in open-ocean and coastal environments as an expeditionary unit. This includes hunting for submarines, searching for surface targets over the horizon and conducting search and rescue operations.

According to Navy officials, the MH-60R is the Navy’s new primary maritime dominance helicopter. Greatly enhanced over its predecessors, the MH-60R helicopter features a glass cockpit and significant mission system improvements, which give it unmatched capability as an airborne multi-mission naval platform.

Serving in the Navy means Santos is part of a world that is taking on new importance in America’s focus on rebuilding military readiness, strengthening alliances and reforming business practices in support of the National Defense Strategy.

“Our priorities center on people, capabilities and processes, and will be achieved by our focus on speed, value, results and partnerships,” said Secretary of the Navy Richard V. Spencer. “Readiness, lethality and modernization are the requirements driving these priorities.”

Though there are many ways for sailors to earn distinction in their command, community, and career, Santos is most proud of being on deployments.

As a member of one of the U.S. Navy’s most relied upon assets, Santos and other sailors know they are part of a legacy that will last beyond their lifetimes contributing to the Navy the nation needs.

“Serving in the Navy is part of my family history,” added Santos.

NAVAL BASE SAN DIEGO – The next ship to be commissioned and carry the Kansas City name arrived at its homeport in San Diego,...
Read more
Military

Tune In: Memorial Day Brings Together Our Best to Celebrate Our Finest

PIECES COME TOGETHER FOR VFW DIGITAL MEMORIAL DAY Coronado Veterans of Foreign Wars Post 2422 and the City of Coronado have been working hard all week...
Read more
Military

SAN DIEGO (May 18, 2020) – The Navy has transitioned into the next phase of its aggressive response to the COVID-19 outbreak on board...
Read more
Community News

Submitted by Khara HarknessI am part of the 75% of white people that occupy Coronado.Coronado is currently at a complete stop. COVID19 is rapidly spreading across the world causing...
Read more
Community News

City of Coronado STATEMENT May 31, 2020TO:         All Coronado residents, businesses, and guests:In view of the violence and property destruction that has occurred throughout San Diego...
Read more
Advertisement
Advertise Here (Get Rates)

Today, Coronado Police Chief Chuck Kaye speaks out to condemn the death of George Floyd, share how it has affected the community from a...
Read more
People

City Manager Blair King had lots of positive community updates to share in his opening report. Dog lovers will be ecstatic to learn that...
Read more