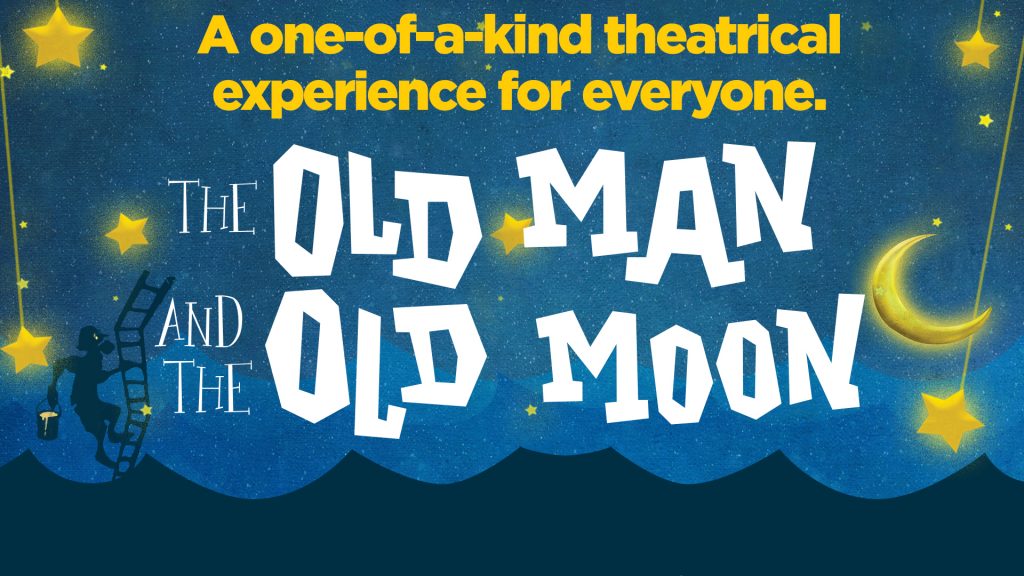 The Old Man has kept his post as the sole caretaker of the moon for as long as he (or his wife, the Old Woman) can remember. Each night, Old Man must fill up the moon with liquid light. He and his wife have been doing this same routine for so long, they’ve forgotten who they are and why they started filling up the moon in the first place. When his wife is drawn away by a mysterious melody sparking memories of their shared past, the Old Man must decide between duty (and routine) and love (and adventure). Luckily for audiences everywhere, he chooses the latter, and what follows is an imaginative sea-faring epic, encompassing apocalyptic storms, civil wars, leviathans of the deep, and cantankerous ghosts, as well as the fiercest obstacle of all: change.

As first-timers to Coronado Playhouse, my guest and I didn’t know what to expect in any way, shape or form. First we had to find it – The Coronado Playhouse is at the northernmost end of the Coronado Community Center. The playhouse has dinner theater type seating which was a bit of challenge due to the very tall person sitting in front of us. After changing our seats and settling in we were treated to a very professional one-of-a-kind theatrical experience just as was promised. The eleven-person cast was most talented and delivered flawlessly. Many of the actors have performed at the Coronado Playhouse and are excited to be back. Several of the actors play more than one role, some as many as four. Much of the story is delivered in song; my favorite voice was delivered by Heather Barton Tjalma (Bartley/Boatswain/Rebel/Sailor). In a word, her voice is pure. She has previously performed at CPH in two other performances and is looking forward to her next project. In fact, only two of the actors, Emily Nuthall (acoustic guitar) and Santiago Valencia-Northrup (Cookie/Solomon/Rooster/Clerk) are making their debut appearances in this show.

My daughter, an 11-year-old vocalist and performer, attended the show earlier in the week with friends, and like me she thoroughly enjoyed it. It is a show for all ages to enjoy. Although it may be over the heads of young children. It’s wonderful to have multiple live theater options available in our community. The Old Man and The Old Moon is a show worth checking out. It plays Thursdays through Sundays, through June 16.

There are special rates and times for this production:

Evening performances are at 7pm and matinees are at 2pm.

PigPen Theatre Co., a collective of theatre artists, actors, and musicians, began creating their distinctive style of theatre, music, and film as freshmen at the Carnegie Mellon School of Drama in 2007. They have since produced original plays in New York City and have toured the country – earning them critic’s picks from The New York Times, The Boston Globe and many more. This imaginative show was performed off-Broadway in 2012 and has been a touring phenomenon since, garnering it many awards and nominations across the county.

The Old Man and the Old Moon is directed by Playhouse favorite Desha Crownover (Seussical, The 39 Steps and Macbeth). Renowned for her mastery in creative storytelling and her expertise with theatre for young audiences (as Artistic Director for San Diego Junior Theatre), Ms. Crownover is the perfect choice to bring this award-winning theatrical tale to the Coronado Playhouse stage. She is joined by music director Ian Brandon, who musical directed the last CPH production, Cabaret. Ian Brandon hails from the U.K. where his professional work as a music director includes productions in London’s West End and National #1 Tours. Ian has vast experience teaching and music directing at several of London’s most prestigious musical theatre acting conservatories and is thrilled to be working alongside Desha in this production.