Post-Paris Climate Accord:  What’s Next?

Though President Trump has withdrawn the U.S. from the 2015 Paris Climate Agreement, this is no time for the 70 percent of Americans who believe climate change is happening to recoil in defeat. Rather, we should feel empowered that a 2016 post-election poll of registered voters found that majorities of Democrats (86%), Independents (61%) and Republicans (51%) alike wanted the United States to participate in the accord and that two out of three voters said the U.S. should reduce its greenhouse gas emissions regardless of what other countries do.

Thus, it is exactly the time to speak out against the misguided actions of The White House by taking decisive steps well within our reach as individual citizens and communities. After all, the Paris Agreement is only a broad-stroke commitment from participating countries to collectively limit global warming to 1.5 to 2.0 degrees Celsius (°C) compared to preindustrial levels. It has always been true that only Congress and legislative bodies at the state and local level, not the President, can enact laws that can move us from a fossil fuel to a sustainable energy economy.

Here’s what’s happening at various jurisdictions around the nation already.

Efforts are underway to pass state-level carbon pricing mechanisms, with the ultimate goal to pressure Congress to act nationally on climate change. The state of New York enacted a carbon price on fuels in 2015, and various bills taxing carbon are in play in Connecticut, Massachusetts, Rhode Island, Utah, Vermont and Washington.

Oregon has already set a cap on carbon emissions, and in California, three bills are being considered that would strengthen its cap-and-trade system which, if not renewed, will expire in 2020. California has also passed the first state-level resolution entreating Congress to enact a national carbon tax (the dividends would go to low- and middle-income residents to offset resulting price rises in consumer products). 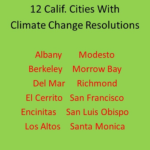 Local jurisdictions around the nation are also feeling how critical it is to send a strong message to their representatives on the Hill. Eleven cities have passed general resolutions calling on Congress to act on climate change, and resolutions passed in 35 other cities and counties, including 12 in California, more specifically petition for some form of a national carbon fee and dividend plan.

The City of San Diego is expressing impatience with Congress’ inaction another way, by passing a ground-breaking and legally binding Climate Action Plan in December 2015 which commits the city to 51 percent greenhouse gas reduction from 2010 levels by 2035. The plan’s strategies include 100 percent of electricity from renewable sources.

The 2016 post-election poll of registered voters revealed that nearly eight out of ten supported placing a tax on and/or regulating global warming pollution. Given the depth of the political divide in America these days, that’s an encouragingly high level of agreement. And, despite the apparent intransigence on Capitol Hill to tackling global warming, change is actually afoot politically that is too infrequently reported in the press. The nascent Climate Solutions Caucus in the House – by design half Republicans and half Democrats committed to addressing climate change – has already grown to 48 members since its inception in February 2016. What’s more, caucus members introduced a major legislative step forward in May, The Climate Solutions Commissions Act, which would establish a commission to scientifically evaluate different approaches to reducing greenhouse gas emissions.

Every American has it within their power to contribute to the growing momentum at community, state and national levels to address climate change head on. Having your voice heard can be as simple as phoning your elected representatives to state your concerns to greater involvement through participation in local organizations focused on climate change solutions. This is how democratic change happens.

The City of San Diego should do what 46 other local jurisdictions across the country have done, pass a resolution telling Congress to step up and lead the rest of the world in addressing the crisis of global climate change.