Ask Alice Presented by CoSA Dance Was a Roaring Success

Ask Alice was an Alice in Wonderland story presented by CoSA Dance. Students in CoSA Dance had a hand in choreographing multiple scenes as well as performing this story through various genres of dance.

Saturday evening, the CHS theater was almost full and it begs the question- why only two days on one weekend? CoSA Musical Theater shows typically last two weekends with performances Friday-Sunday. Surely, there has never been a more vocal audience than those viewing this dance performance. Heather Noonan snagged the lead role as Alice but she was not the only one worth watching that night. Many other cast members stole the stage with their passion and originality.

After a few shorter intro dance numbers, Getting Dry began with “Don’t Worry, Be Happy” by Bob Marley. The scene was choreographed by Grace Adkins and Shoshana Mahoney. This piece brought more life into the story and was followed by one of the best scenes, Tweedle Dee & Tweedle Dum. Tweedle Dee & Tweedle Dum took a unique turn, instead of focusing on one pair of twins, the performance opted to have five pairs up on stage. This creative twist certainly paid off.

A projection screen stayed visible as the background image throughout the entire performance. In some scenes, like Tweedle Dee & Tweddle Dum, the images were helpful to solidify the meaning in the scene. In Caterpillar, the screen displayed psychedelic images which also enhanced the scene; although the young lady who played the Caterpillar certainly did not require anything else to improve her performance. In many scenes though, the projection was distracting; at times even taking away from the performance. When there is such great live talent on stage, it is unnecessary and often a hindrance to have something else playing in the background.

The performance progressed to feature Shelby Mayes who was absolutely fierce. The senior CoSA dancer choreographed her own number, Cheshire Cat, where every movement flowed into the next. She looked so natural and graceful. Audience members could be heard throughout the theater murmuring, “beautiful” and “amazing” in praise.

After intermission, the show resumed with Bella Chavez portraying the Mad Hatter. Bella had the perfect amount of fun and flare. Her dance took audience through Tea Party which left audience members laughing and bouncing in their seats. It certainly was a party for all! Bella danced her way into the next scene, Gone Mad, which she choreographed herself. Bella as the Mad Hatter was an absolute riot and the audience would have enjoyed a few more solos from the talented dancer.

After three back to back stars playing the Caterpillar, Cheshire Cat, and Mad Hatter, the performance slowed down a bit. Once the audience had calmed from the marvel they were hit with a surprise. Róisín Lyons, as the Red Queen, who began uneventfully, lifted her skirt to reveal a pair of tap shoes and then took the audience by storm. A champion Irish Dancer, Róisín left audience members in awe of her quick, rhythmic feet. 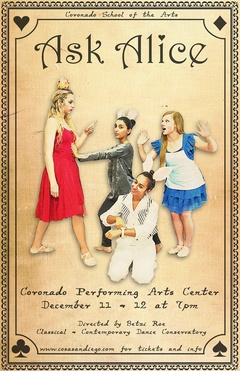 Ask Alice was a CoSA show for the books, and a big BRAVO goes to Director, Betzi Roe. The behind the scenes work was seamless thanks to the CoSA crew, and many of the younger dancers who did not have lead parts played their scenes very well, exciting audiences to see future CoSA Dance shows. One can only hope that the next CoSA Dance performance is extended a second weekend for all of Coronado to watch and enjoy.

You can make sure not to miss a show by liking CoSA Dance on Facebook.