Sybil Bailey Stockdale, the driving force behind the national movement to end the torture and mistreatment of American POW’s in Vietnam and insure that they were able to return home with honor, and wife of Vice Admiral James Bond Stockdale, has passed away at the age of 90.

Sybil Elizabeth Bailey was born to Sidney and Lucretia Bailey at their family home in East Haven, Connecticut on November 25, 1924. As a young girl, Sybil learned the value of hard work helping at the Bailey Dairy operated by her father and uncle. But she was happiest during the summer months swimming and boating in nearby Branford at the family cottage on Long Island Sound. After graduating from Mount Holyoke College (Sybil believed that her all-woman college education honed her leadership skills) Sybil taught at St. Catharine’s School in Richmond, VA, a private school for girls. It was there on a blind date in the spring of 1946 that she first met and fell in love with Jim Stockdale, then a Midshipman at the U.S. Navy Academy. Sybil and Jim were married in the Congregational Church in North Branford, CT on June 28, 1947. 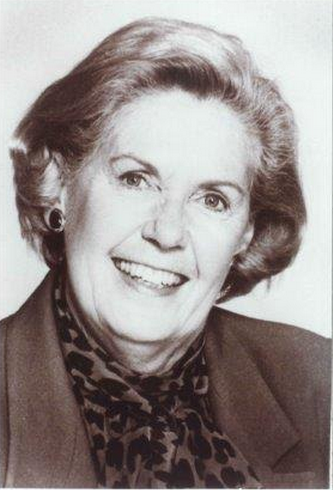 So began Sybil’s life as a Navy wife, a role that from the very beginning she was determined to make successful despite its many challenges. Jim entered Navy flight school in Pensacola, Florida in 1948 and quickly moved up the ranks of naval aviation. In 1957 they moved to California and while Jim was stationed at Moffett Field in Palo Alto, Sybil received her Master’s degree in education from Stanford University. By 1962 Sybil was the mother of four boys and living in Coronado, California. Jim was off on carrier duty as the commander of attack squadron VF-51 and CAG 21 which was centrally involved in the Tonkin Gulf incident which led to US military involvement in the Vietnam War.

Soon after Jim’s plane was shot down in September 1965 and he became a prisoner of war in North Vietnam, wives of other POW and MIA servicemen began gathering at the Stockdale home in Coronado for mutual support and, what Navy wives do so well; have some fun. Alone and overwhelmed by events, Sybil initially respected the policy of the government which called for the wives to remain quiet about the POW ordeal. She had her sons to care for but needed a diversion from the horrible circumstances, so she began teaching in a local junior high school in San Ysidro. Many of her students “ran the border” daily from Tijuana to attend school with the popular Mrs. Stockdale.

Within a year it became apparent to the wives that the POWs were being brutally mistreated and even tortured and our government appeared powerless to act. Sybil pushed the POW/MIA wives’ group to organize formally and together they founded the League of American Families of American Prisoners and Missing in Southeast Asia. They elected Sybil their first National Coordinator, and so began Sybil’s many trips and eventual move to Washington, DC. The League sought to convince members of Congress and the Administration that they should abandon their “keep quiet” policy, publically acknowledge the torture and mistreatment of American POWs, and pressure North Vietnam to abide by the Geneva Convention.

During the remainder of the Vietnam War Sybil worked tirelessly on behalf of the POWs and their families. Following the election of 1968, the new administration did finally publically acknowledge and condemn the treatment of those held in North Vietnam. Both Sybil and the League became regular participants in discussions about prisoner issues at the highest levels of government and she met regularly with President Nixon and Henry Kissinger. She appeared on national television many times and she and her organization became the voice of prisoner recognition and hope. At the same time Sybil worked closely with the CIA to write secretly encoded letters to Jim. In 1972 Sybil travelled with other League members to the Paris Peace Talks where they confronted the Vietnamese delegates on the treatment of American prisoners. As the result of her determination and courage, prisoner treatment improved and eventually the POWs were released in February, 1973.

Following Jim’s return, Sybil’s personal resolve and the loyalty she demonstrated to our country on behalf of the POWs and MIAs was recognized by the chief of naval operations who presented her the U.S. Navy’s Distinguished Public Service Award. She is the only wife of an active-duty naval officer ever to be so honored. In part that citation reads:

By her courageous and determined actions, Mrs. Stockdale performed an outstanding public and humanitarian service for captured and missing military members of all services, their families and the American people. Her actions and her indomitable spirit in the face of many adversities contributed immeasurably to the successful safe return of American prisoners, gave hope, support and solace to their families in a time of need and reflected the finest traditions of the Naval service and of the United States of America.

Sybil’s unrelenting drive to heighten public awareness of the POW/MIA issue and insure their safe return with honor, while at the same remaining loyal to the mission of the military, made her a legend among military families and others who recognized her heroism. In 1984 Sybil co-authored In Love and War with her husband which describes their ordeal during the Vietnam era. Her story is still considered “required reading” for young military wives.

Sybil loved her years working as a “Pink Lady” at Stanford University Hospital in the late 1980’s while Jim was at the Hoover Institution. Her papers and memoirs from the Vietnam era, all meticulously written in long hand on yellow legal pads, reside at the Hoover library today. In 1992 Vice Admiral James B Stockdale was the vice-presidential candidate for the Independent Party with Ross Perot and they received 19% of the popular vote. In 1995 Sybil and Jim Stockdale retired to Coronado, CA where they remained active in local community affairs. A core group of the original POW/MIA wives still met monthly at Sybil’s home until her passing, and passers-by must have wondered at the raucous laughter coming from within the Stockdale home. In spite of severe Parkinson’s, Sybil’s famous sense of humor never failed to surface. She inspired, entertained, loved and was loved by thousands.

Sybil Stockdale was predeceased by her husband Jim in 2005 and her son, Stanford Stockdale, in 2014. She leaves behind three sons; Jim Stockdale of Beaver, PA; Sid Stockdale of Albuquerque, NM; and Taylor Stockdale of Claremont, CA. They, along with their daughter’s-in-law and eight grandchildren, adored their “Mumsie” and are thankful for her caretakers, especially Evelyn Beltran, who made her last days and years graceful and honorable. A memorial service will be held for Sybil in Coronado, CA and she will be buried beside Jim on the grounds of the U.S. Naval Academy in Annapolis, MD.

A community-wide service will take place on Saturday, Nov. 14th at 2pm in Spreckels Park.

The flags throughout the City of Coronado have been lowered to half-staff because of the death of Sybil Stockdale, Coronado resident and wife of former Vietnam POW and Vice Presidential candidate Admiral James Stockdale.