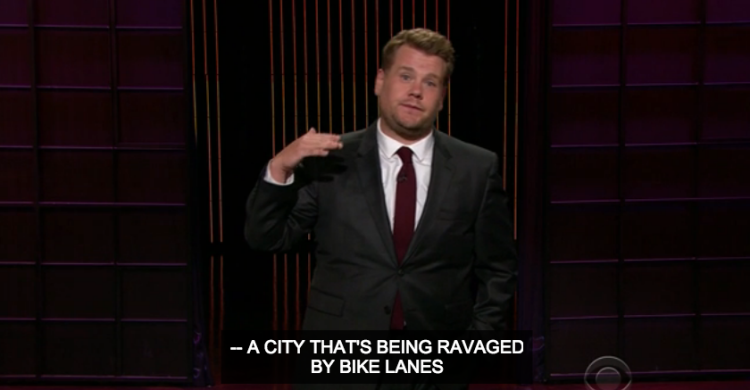 The “Late Late Show with James Corden” highlighted (rather, roasted) Coronado’s bike lane striping opponents as well as Mayor Casey Tanaka. It’s been circulating via multiple social media platforms since last night and we have received more than a few texts and emails asking for coverage.

The Coronado ‘bit’ starts at the 1 minute mark and lasts for over 4 minutes. Watch it here at CBS or below:

Councilman Richard Bailey voted to suspend bike lane striping and offered this feedback on why the council voted unanimously to ‘hit the pause button’:

If I were to summarize why I and perhaps the other Councilmembers voted to suspend striping and revisit the issue in the near future, it would come down to one word -process.

In 2011 the City created the Bike Master Plan and only a handful of people participated in the public workshops.

Over the years since then, as certain elements of the BMP were being implemented, entire neighborhoods voiced opposition to certain aspects of it while other neighborhoods were either supportive or indifferent. So some streets were marked and others were not.

In my opinion, the bicycling community and the general public deserve better than the inconsistent and unpredictable approach we have taken since 2011. I am confident the Council will “get it right” next time when more people are included in the process from the very beginning.

Read the eCoronado.com article for more details from that September 15th City Council meeting and what led to the decision to suspend bike lane striping.

All of the local Coronado clips were taken from a KPBS video story which used ‘public comment’ excerpts from the September 15th City Council meeting.

Watch the KPBS video where the “Late Late Show with James Corden” borrowed some clips: