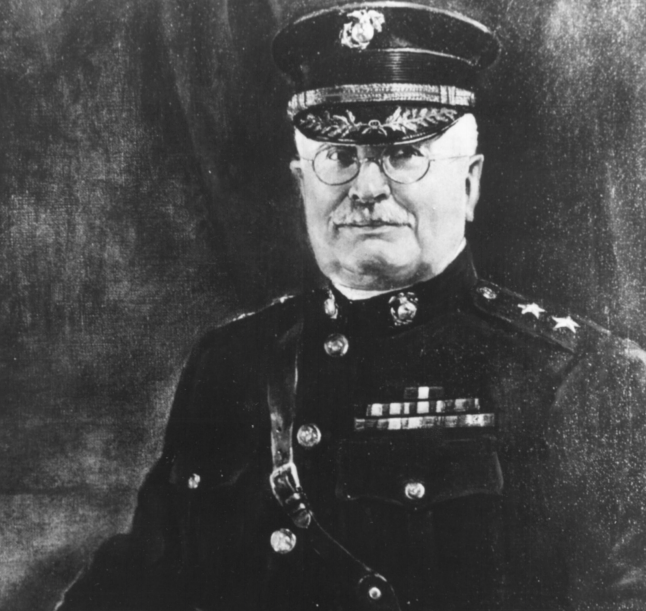 San Diego prominence as a military hub can be traced to one determined Marine: Major General Joseph H. Pendleton. Without his foresight, persuasive skills, and focused tenacity, San Diego would not be the military center it is today. Neither would Coronado.

According to those who knew him, Pendleton frequently pointed out that he and fellow Marine Charles H. Lyman could be considered discoverers of San Diego right alongside Juan Cabrillo, the original explorer of the harbor, some three and a half centuries before. Pendleton’s impact on the region was just as historical.

Joseph Pendleton was born in Rochester, Pennsylvania, on June 2, 1860, to a whaling-ship officer and his wife. Upon graduation from the United States Naval Academy in July 1882, he served two years as a Navy Cadet. He then transferred to the Marine Corps. He married Mary Helen Fay of Annapolis a month after graduation.

Shortly after promotion to First Lieutenant, young Pendleton took command of Marine Barracks in Sitka, Alaska, where his son Edgar was born in 1892. A daughter Helen arrived three years later.

At the outbreak of the Spanish-American War in 1898, Pendleton took part in the bombardment of Santiago, Cuba, and is credited with firing the last shot in that engagement. During that battle, Pendleton suffered a detached retina in his right eye from the concussions of the big guns he commanded. In an odd footnote to history, five years later a board of officers unsuccessfully attempted to force him into early retirement because of his eyesight.

Promoted to Captain in 1899, Pendleton returned to Sitka, Alaska, for a four-year stint. While there he was adopted by the Tlingit Alaska native tribe and Mrs. Pendleton founded the first Daughters of the American Revolution post in the territory.

From 1904 to 1913, Pendleton commanded Marine expeditionary forces in the Philippines, Guam and Cuba. But it was his command of all Marine forces occupying Nicaragua in 1912 that would define the image of the toughness and preparedness of the Marine Corps “leathernecks.” Under Pendleton’s command, Marines quickly crushed the revolution and restored peace to Nicaragua.

Two years later, following the Mexican seizure of an American shore party at Tampico, Mexico, relations between the United States and Mexico once again turned for the worse. Pendleton was ordered to organize and command the reactivated 4th Regiment expeditionary force. For three months, Pendleton and his regiment cruised off the West Coast of Mexico until they withdrew to Camp Howard, North Island, Coronado, in July 1914.

With its great weather, harbor, proximity to Mexico and the recently opened Panama Canal, Pendleton recognized San Diego’s potential as a Marine Corps’ Advance Base on the West Coast. Pendleton and his regiment took to improving facilities at Camp Howard by laying roads, digging latrines, stringing utility and telephone wires and pumping fresh water over the Spanish Bight causeway, between what used to be K Street (now Alameda) and North Island. Pendleton and his men modernized North Island.

Pendleton also recognized that Coronado was a beautiful place for his family to call home and bought a house near the harbor.

At that time, however, the Department of the Navy had no intention of establishing a permanent Marine barracks in the city. The question of the initial expense was a serious one but the weather, harbor, and location were strong factors in its favor. Until his retirement 10 years later, Pendleton would continue to promote a major Marine Corps Installation.

Pendleton’s 4th Regiment had made a favorable impression on the community and became known as “San Diego’s Own” while his organizational skills and civic-mindedness had made him well-loved by Coronado and San Diego leaders.

But it was the 1915 Panama-California Exposition in Balboa Park that provided him a great opportunity to show off his Marines to visiting politicians and high-ranking dignitaries. Marching his Marines across the Cabrillo Bridge to Balboa Park during the Exposition no doubt helped win government support of a large Marine Corps base at San Diego. After the Exposition, Marine Barracks were temporarily set up in Balboa Park using some of the buildings specially erected for the event.

With unrest in the Dominican Republic in 1916, Pendleton and his 4th Regiment left San Diego where he took command of all American Naval forces ashore in Santa Domingo. As he prepared to move inland, he issued his widely known order to all officers of the U.S. Forces Operating Ashore on their proper conduct as members of an occupying force. He stressed that they were not invaders but were in the country to restore peace and order, protect life and property and support the constituted government.

During this campaign, Pendleton received the Navy Cross and the Distinguished Service Medal. He was designated military governor of Santo Domingo for the next two years, showing great skill as a military diplomat. He emphasized respectful working relationships with local officials and put his Spanish speaking skills to good use.

Brigadier General Pendleton returned to the U.S. in 1918 and commanded the Marine Barracks at Parris Island, South Carolina, finally returning to San Diego to join the Second Advanced Base Force as its Commanding General.

The Marine Barracks were still located in Balboa Park and frustratingly the Marines were not placed under Pendleton’s command until the end of 1921 when they moved into the new base established in Dutch Flats, the area now known as Marine Corps Recruit Depot San Diego.

“Uncle Joe” as he was affectionately known remained in Coronado upon retirement in 1924 as Major General. He continued his support of veterans’ fraternal organizations and was Commander of the Coronado Camp of the United Spanish War Veterans. He was also Commander of San Diego Post Six of the American Legion, and joined the Sons of the American Revolution while there. After retirement he served on the Coronado School Board for 14 years. He also spent several years on the City Council. He was mayor of Coronado from 1928 to 1930.

Pendleton died on February 4, 1942 at his home in Coronado at the age of 81. Within two months of his death, the Marine Corps began construction of a large base on the former Rancho Santa Margarita y Las Flores, former land grant of Pio Pico north of Oceanside, as was Coronado. When it came time to name the base, the obvious choice was Pendleton who had long advocated for a major Marine Corps installation on the West Coast.

On September 25, 1942, President Franklin D. Roosevelt arrived at the Camp for the official dedication of Camp Joseph H. Pendleton. Mary Pendleton, his wife, took an active interest in the base. She died in Coronado on June 26, 1952, at the age of 88.

*note: General Pendleton’s banner can be seen directly across from the formerly named Triangle Park. This biography serves as documentation of why the park was renamed as, Pendleton Park.

Next week’s Avenue of Heroes biography will be Sergeant Thomas M. Rice. by Shoshana Jones, May 2015 (Banner at Fourth and F)

To nominate someone for a Hero Banner, download and application from the City of Coronado Website or visit City Hall and pick one up. Upon submission, you will need a photograph and news article or DD214 form. The nominee should have lived in Coronado. A base address constitutes residency.

MEMORIAL DAY SERVICES RETURN TO STAR PARK, MAY 31 By Joe DitlerMemorial Day has never been taken lightly by Coronado residents. It always carries with it...
Read more
Community News

In the early hours of D-Day, June 6, 1944, 22-year-old Staff Sergeant Thomas Rice jumped into Normandy as part of Operation Overlord, the...
Read more