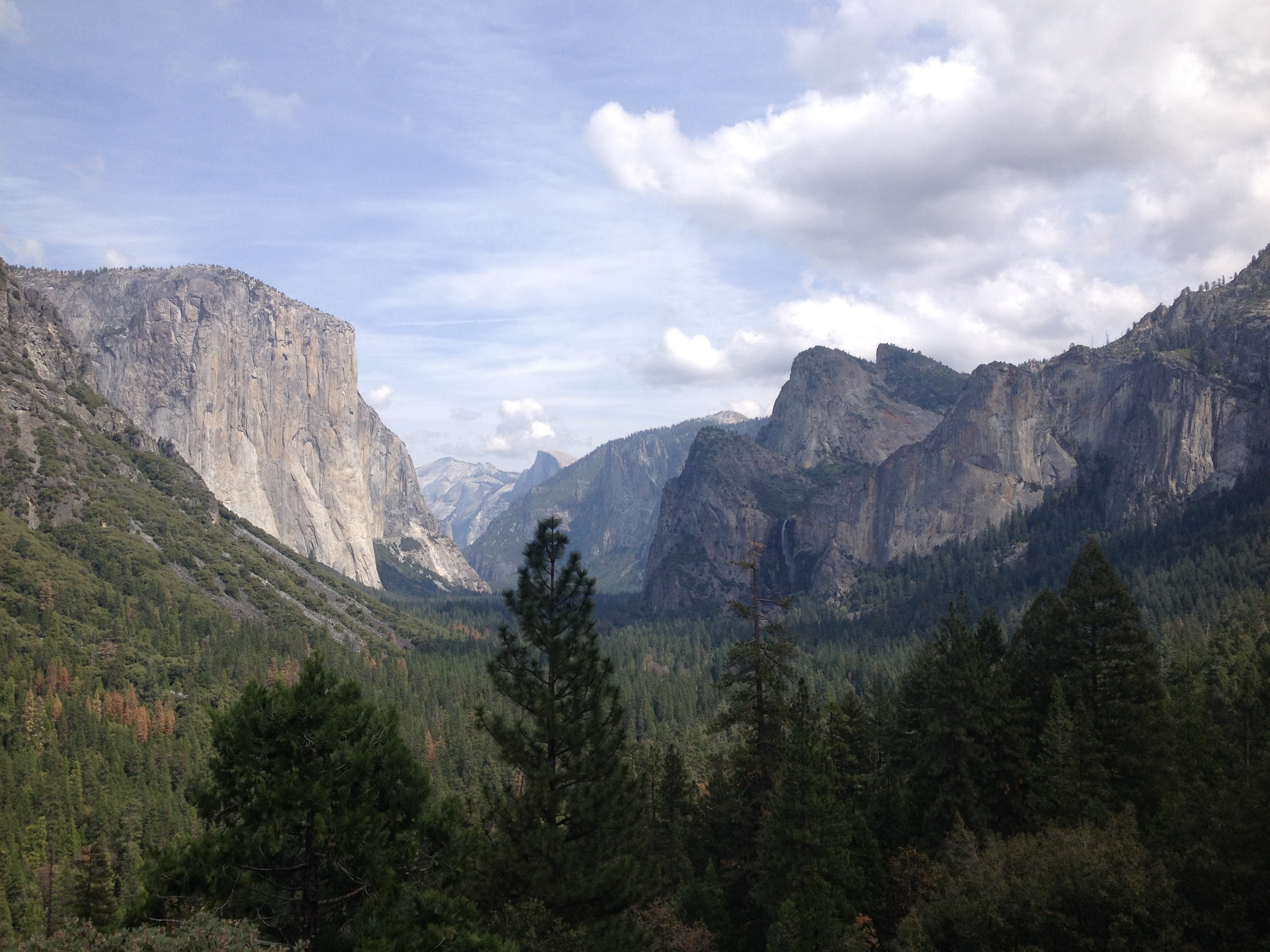 When our family moved to California almost three years ago, we immediately devised a “bucket list” of things we wanted to do and places we wanted to go during our time here. Wanting to make the most of our time on the West Coast, we developed a hefty and somewhat ambitious list, knowing that we probably wouldn’t get to it all, but we were at least going to try. At the top of our list was visiting Yosemite National Park. Both my husband and I have fond memories of camping trips as kids, and we wanted our boys to experience that as well. So during spring break, we packed up the minivan, headed to Fresno to pick up a rented RV and set our sights on what we soon found to be one of the most beautiful places we have ever been.

During our visit, I was eager to absorb as much as we could about this national park, which I learned was the first established national park in the world, thanks to President Lincoln and Scottish-American naturalist John Muir, whose activism helped preserve the Yosemite Valley and Sequoia National Park, and other wilderness areas. I understood quickly why more than 3 million people each year visit the park  it’s simply stunning! We camped in the Valley, which was about an hour drive into the park, and it was difficult to keep my eyes on the road for wanting to look at all the beautiful granite cliffs, waterfalls, meadows and mountains all around me. Immediately, I was struck by the vastness of the area and diversity of the landscape. I couldn’t wait to dig in to the week that lay ahead.

Day 1:
After a long day of travel and some wiry kids, my head was pounding when we arrived at our campsite. We spent the day getting acquainted with our RV and setting up our campsite while our two boys, Ryan (7) and Evan (2) ran amuck around us. It suddenly hit me that camping as a parent is much different than camping as a kid. We had to do all the work! It was a lot of not-so-patient waiting on the boys’ parts, which was a challenge, for them and us. But we charged through and a couple Tylenols later, my headache subsided and we were ready to settle in to our week of rest and relaxation. 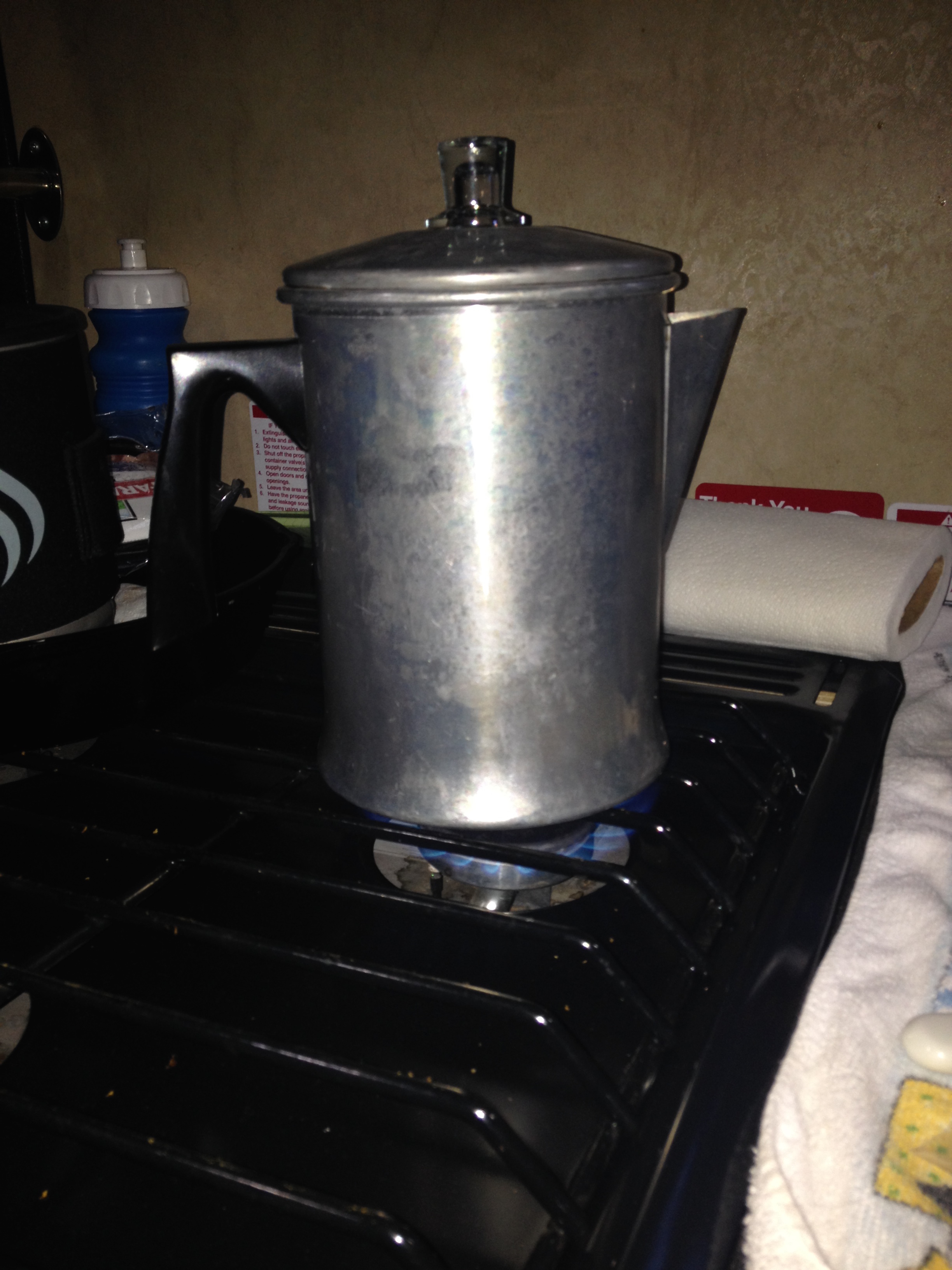 Our first morning at the campsite was full of fun as we prepared our breakfast over the campfire and brewed our coffee in an old-school percolator. While my husband and I are all about RV camping, we still like to steer away from some modern conveniences when we can. It was some of the best coffee I’ve had in a long time! Hot too, thankfully, as it was about 30 degrees outside. After spending a few years on the West coast I realized that I hadn’t been this cold since 2012. 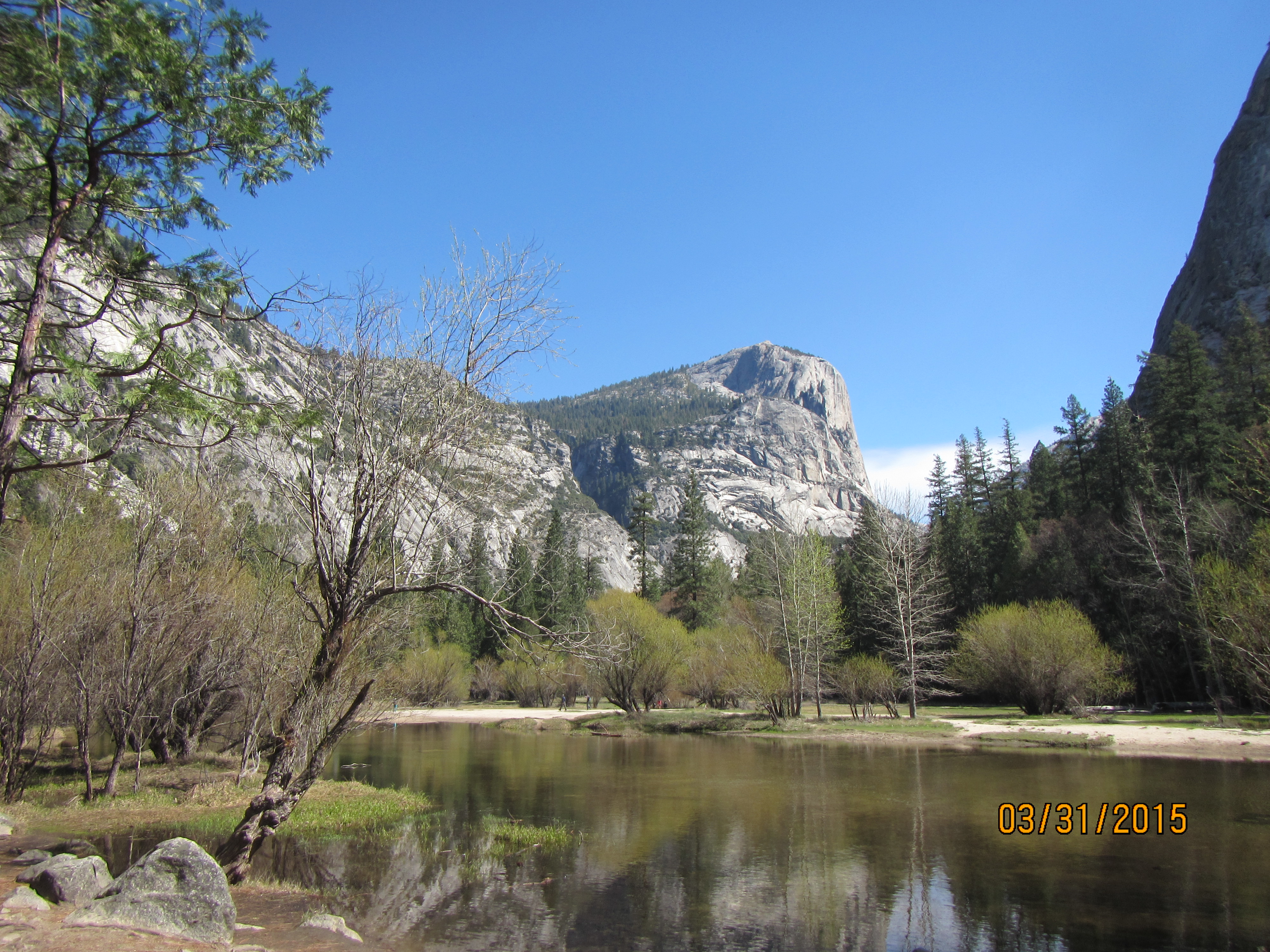 We agreed on our first adventure hike and set out to Yosemite’s Mirror Lake, which is famous for its reflections of Half Dome and Mount Watkins. It was a relatively easy hike to do with kids and provided plenty of room for them to run around safely and burn off some energy. Later that afternoon, we set out for Yosemite Falls, which is one of the world’s tallest waterfalls. It’s actually made up of three different falls  Upper Yosemite Fall, middle cascades and Lower Yosemite Fall. These falls visible from various spots as we continued to explore the Valley region during our stay. Another amazing landmark we always had our eyes on was Half Dome, which is probably one of the most recognized symbols the park. 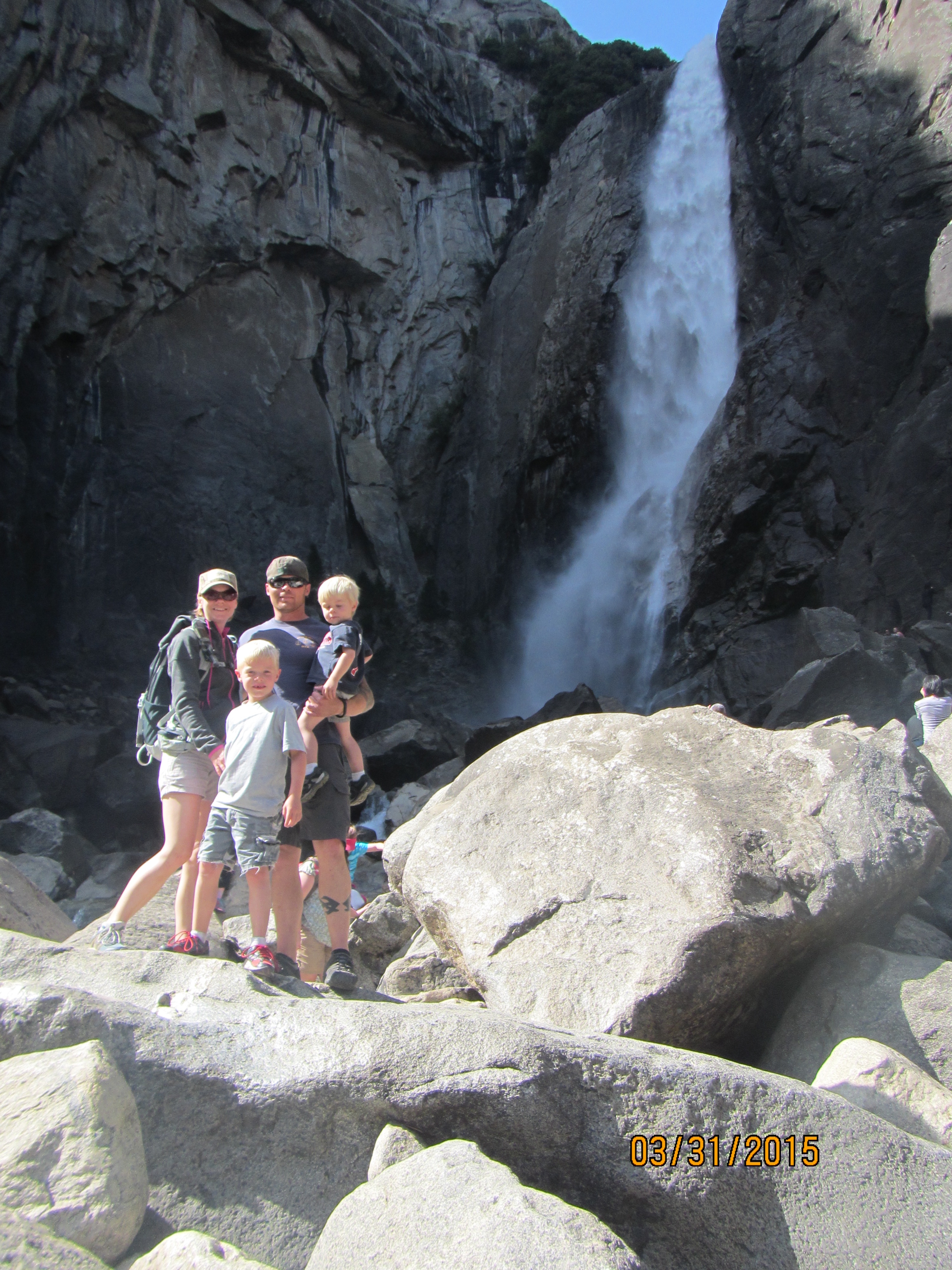 We continued our exploration and took a shuttle over to the famous Ahwahnee Hotel. One of the perks I found in Yosemite was the complimentary shuttle service they provided throughout the Valley, which made getting from point A to point B with two tired boys so much easier. I had no idea there was such a hotel in the park. 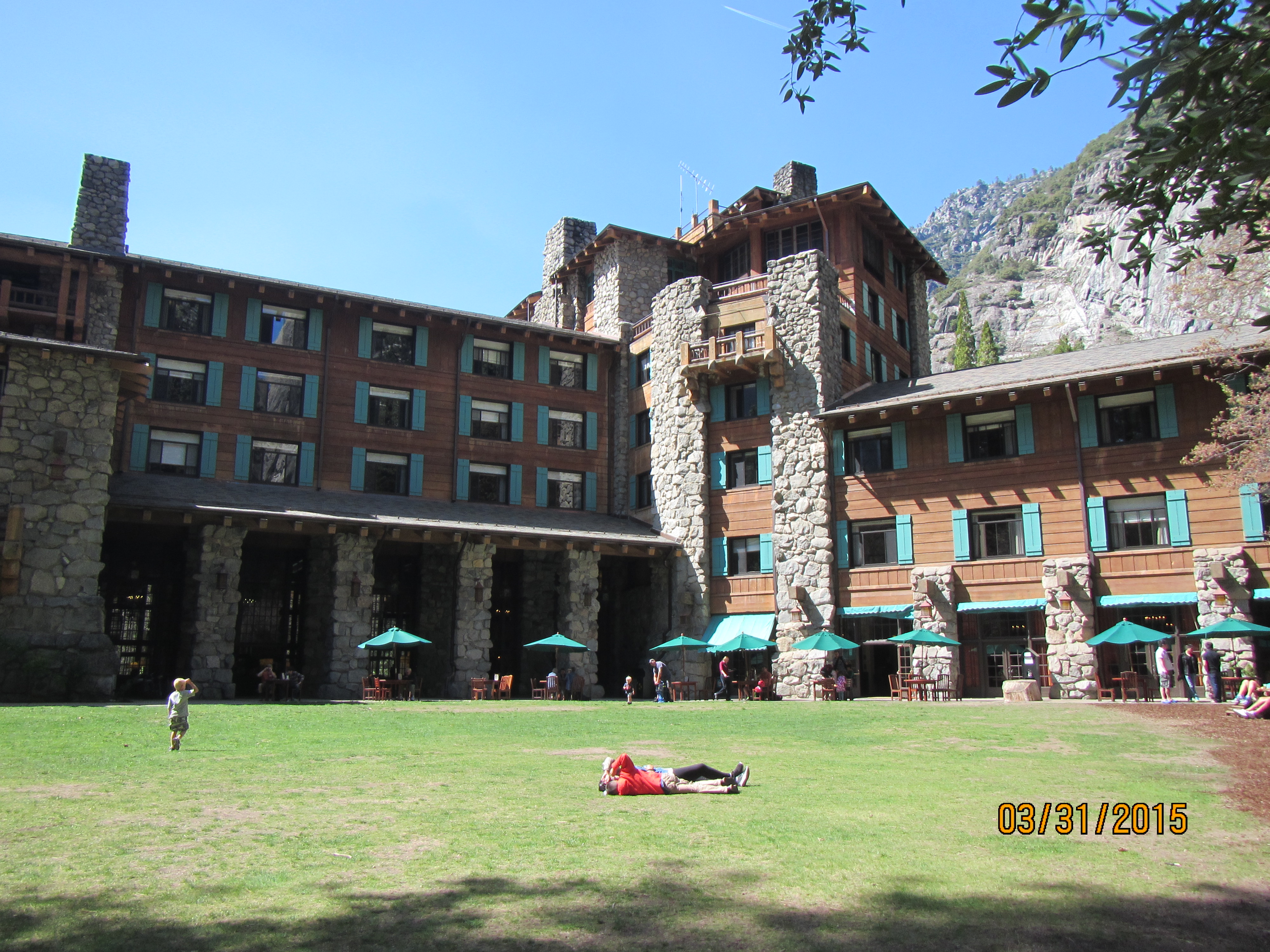 The Ahwahnee, which was built in the 1920’s to suit influential and affluent travelers, is best known for its Great Lounge and massive stone fireplace (perhaps to offer guests a respite from 30 degree temperatures) and also boasts the crown jewel of Yosemite dining  the Ahwahnee Dining Room, which requires resort casual dress and well-behaved children. My husband and I marveled at the gorgeous interior, sighed, and quickly grabbed our two boys and left. Someday, we said, we would be back. 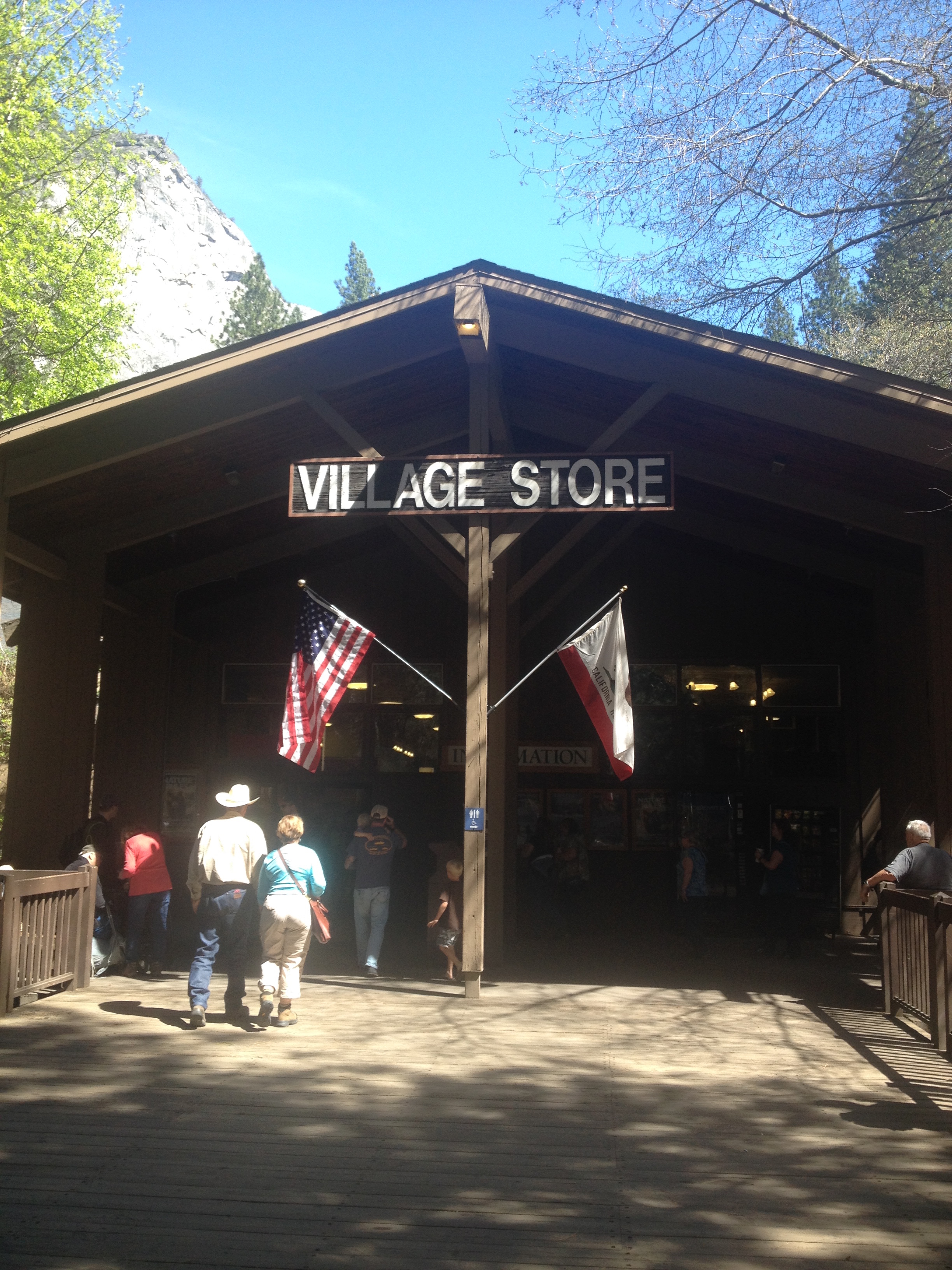 Next up was Yosemite Village, a lively area with shops, delis, a general store and even a post office. I was again pleasantly surprised at how much was offered in the park. More than just an expansive wilderness area to hike and camp, Yosemite truly does offer something for everyone  from primitive camping to fine resort living and everything in between.

After a full day, we were all ready for some shut eye, but not before we enjoyed s’mores over the campfire. Before we called it a night, we made sure to have everything cleaned and packed up, safely in our bear locker, to ensure that we didn’t have any nightly visitors. Yosemite is home to nearly 500 American black bears, who are all apparently hungry and will even eat sunscreen. We thankfully never encountered a bear during our visit, and made sure to abide by the park’s bear management regulations. 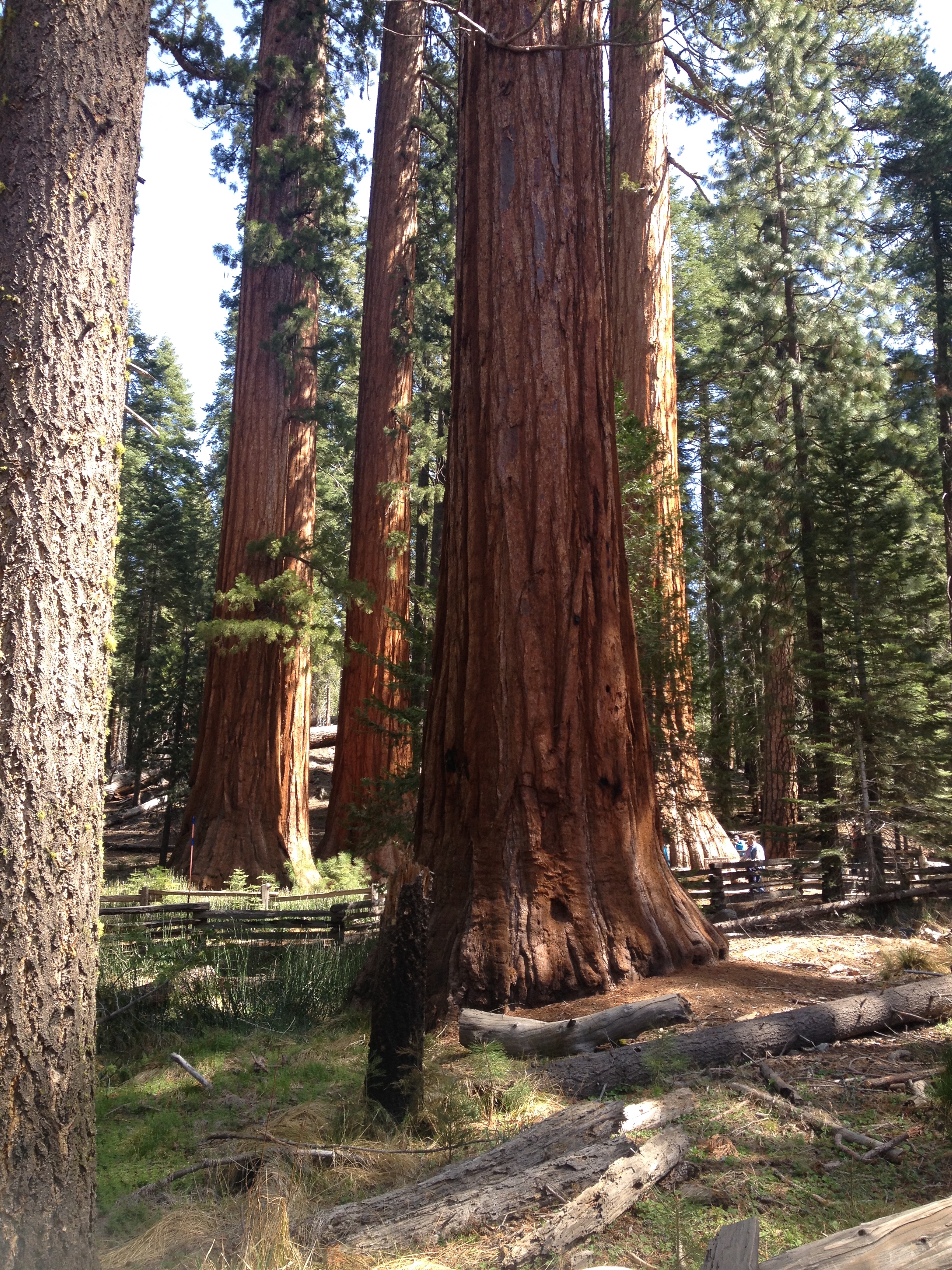 Next on our list was the Mariposa Grove of Giant Sequoias, which was a one-hour drive from our campsite and just past the town of Wawona on the south end of the park. The grove contains about 500 awe-inspiring giant sequoias, which are known to be perhaps the largest living things on Earth. We enjoyed stunning views of the grove’s most popular trees  Bachelor & Three Graces, Grizzly Giant and the California Tunnel Tree. The trees were massive, guarding the grove like giant protectors, which grew hundreds if not thousands of years ago from tiny seeds no bigger than a flake of oatmeal. It was a fun hike with our boys and I was reminded of the patriotic song “This Land is Your Land” as we trekked through this beautiful redwood forest. It wasn’t lost on me how blessed we were to have the freedom to explore this natural paradise that had been preserved for our enjoyment for more than 125 years. 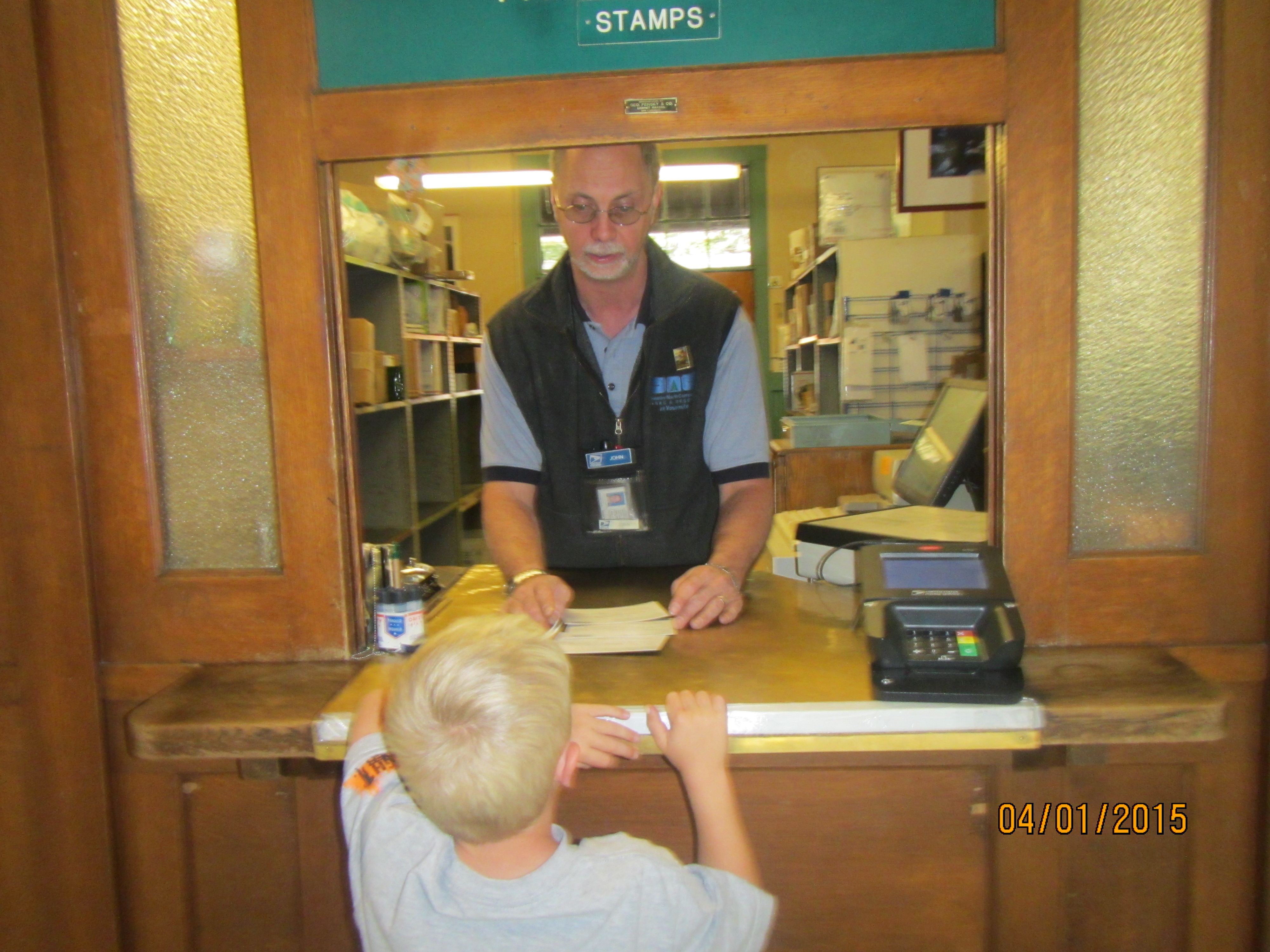 After exploring Mariposa Grove, we headed back to Yosemite Village to the Post Office where Ryan received a lesson in DIY mailing. He had prepared a few postcards to send to his grandparents and cousins, which were aptly postmarked “Yosemite National Park.”

Day 4:
The next day we explored Vernal Falls via the Mist Trail, which proved to be the most strenuous hike of our stay. Mostly uphill, the trek to the top of the falls, which included a rocky “staircase,” was worth it, until we had to turn around and climb back down. Apparently, I have a fear of heights and slippery cliffs. Who knew?! But, what goes up must come down and inch by inch I made it back down, slowly but surely. Ready for some less intense exploration, we headed back yet again to Yosemite Village to check out the museum and Indian Village, where the boys enjoyed running in and out of the reconstructed teepees.

Day 5:
By the time our last full day rolled around, my husband and I realized that we were starting to run out of things to do and places to explore, at least with having kids in tow. We had explored what seemed like every inch of the Valley, from the hiking trails and meadows to Yosemite Village and Curry Village. We hadn’t yet checked out Yosemite Lodge, which offers hotel-style accommodations and casual dining options, along with an outdoor amphitheater, nature center and gift shop. So we headed over and scoped out a place for dinner, in an effort to simplify our last evening in Yosemite.

During our week of camping, Ryan had befriended a boy his age that was camping next to us with his family. It was fun to watch a new friendship blossom over the short time our families were neighbors. By the time bedtime rolled around on our last night, there were many tears and promises of keeping in touch. Perhaps as a foretaste of what is to come in the months ahead as we prepare to move, my heart ached for my son who has become somewhat accustomed to saying goodbye to friends. While I hurt for the sadness he was feeling, I felt thankful that he too chooses to go to the party, to put himself out there and share his heart with others. He’s always been that way, and I hope he continues to live his life in such a fashion.

Day 6:
Time to pack it up and head on home, with our very own Yosemite souvenir coffee cup and a lifetime of memories. Our time in Yosemite was nothing short of extraordinary. When you strip away the noise of life and reduce yourself to the bare necessities, you realize just how much all the excess can get in your way. Simple moments truly are some of the most remarkable. Cooking popcorn over the camp stove. Snuggling under blankets and reading bedtime stories. Stopping to climb on a rock. Walking to the shower in your flip flops and feeling so grateful to wash away the day’s grime. Throwing out the to-do list and simply enjoying each other. It was a much-needed time for family reconnection and a digital detox for us all. We spent less time looking down at our devices and more time looking up and marveling at God’s handiwork. Even the moments of frustration with urging the boys to finish the hike despite their tired and cranky bodies were ones I wouldn’t trade. It was a time for us to reset and refocus on what matters most  each other. And they thought we were just camping.

See what’s new for day trippers at America’s beachfront legend.For Sunbathers The Del has been fulfilling dreams of California surf, sand and sun for over...
Read more
Dining

Valentine’s Day at The Del

Hotel del Coronado is a romantic world all its own - a majestic beachfront destination that’s captured hearts for generations. It’s the place where...
Read more
Travel

After returning to Coronado I’ve had some time to reflect on my adventures. The time I spent traveling around both California and the Pacific...
Read more

On Sunday, June 14th, the Hotel del Coronado welcomes a very special guest, and this time, it's not a secret. Gary Sinise and his...
Read more
Community

Kyle McCarty is a creator with an entrepreneurial spirit. He's always had a knack for fixing things. When he was younger, his father once...
Read more