The clouds were overcast and a light drizzle fell from the sky late on a Sunday afternoon in June 2013 when Denise Szetela drove onto the Coronado bridge. A motorist behind her quickly came to a stop when he witnessed Szetela slam on her brakes mid-span and quickly exit her vehicle. It didn’t take but a second for the man, who was headed home from the grocery store, to recognize the scene that was unfolding before his eyes  a far too common one since the bridge opened in 1969. The man lept out of his car, the traffic now stopping behind him, and yelled out a quick plea in the hopes it would fall on receptive ears.

But it was too late. The 42-year-old fun loving woman with a beautiful smile and great sense of humor didn’t hesitate for a moment before stepping over the side rail of the bridge and jumping into the water more than 200 feet below, ending her life. 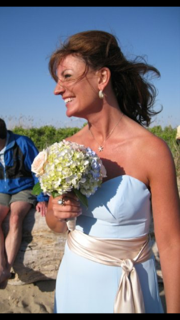 “Her smile and laugher were infectious,” recalls Szetela’s friend, Roxanne Donado. “She was loved by so many.”

Denise was beautiful, intelligent and fun loving. But unbeknownst to many, even those who were close to her, she was severely depressed.

In her suicide note, which was carefully placed in the console of her car alongside her driver’s license and a list of names and phone numbers, Denise referred to her “game face.”

Roxanne was one of those names, and was called by a second motorist who had stopped to help. After being asked if she knew Denise, the call abruptly ended.

Roxanne was the last of Denise’s friends to see her alive, and took on the unenviable task of notifying other friends and family members of the tragic news.

“I suffer my own sort of PTSD from her suicide. From being the last one to see her alive, to hearing the confirmation of death from the medical examiner’s office, to contacting her family to break the horrible news and hearing the earth shattering screams on the other end of the line. And the most awful thing of all is to go over that bridge every day and envision in my mind’s eye her act of death. Every day, twice a day. It’s haunting like a scene in a movie you can’t get out of your head,” she recalls.

Thirty years prior, Denise’s own mother jumped from a bridge, at the same age as Denise was at the time of her death. Just two days prior to her death, Denise had attempted suicide and was sent to a psychiatric facility for treatment. Denise was unfunded. The facility was short on beds. And Denise told them she was not suicidal. After a day and a half, she was released. The warning signs were glaring.? Four hours later, she was dead.??????????

Denise Szetela is sadly one of hundreds of people who have died by suicide from the Coronado bridge. Some research suggests that the Coronado Bridge is the 3rd deadliest suicide bridge in United States, trailing San Francisco’s Golden Gate Bridge and the Aurora Bridge in Seattle. Between 1972 and 2000, it is said that more than 200 suicides have occurred from the bridge. And the numbers are ever growing.

Over the years, the Coronado community has called for something to be done to prevent suicides from the bridge. A 34 inch concrete wall acts as the only barrier. A three foot wall, shorter than a preschooler, which can easily be scaled within 2 ½ seconds, leaves virtually no time for the one known as “jumper” to be saved.

Coronado local and advocate for suicide awareness and prevention Melissa d’Arabian explains that every second matters. An extra 15-20 seconds can mean the difference between life and death.

Several options from a bridge lighting plan and signs alongside the Crisis Hotline number on the bridge have been discussed. 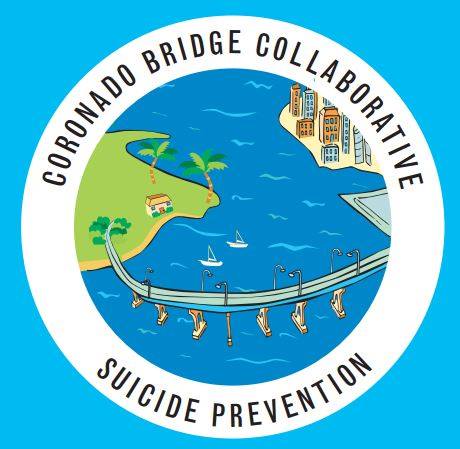 Last fall, a group of concerned citizens in Coronado banded together to form a grassroots collaborative to investigate ways to stop the suicides from the Coronado bridge. Known as the Coronado Bridge Collaborative for Suicide Prevention, the group was born out of Coronado’s Third and Fourth Street Planning Committees (TAF) who have been working on and planning the renovation and beautification of the toll plaza area. During a walk through of the toll plaza area, one of the members picked up the crisis hotline phone. It was dead.

The research began. Who was responsible for the phone? Why wasn’t it working? Two local women volunteered to check the phone every other week, which has now been restored to working order.

Jennifer Lewis, a licensed mental health professional with UCSD and one of the founding members of the collaborative, explains that the access and crisis line has not received a call from the bridge in 6 years. And currently, there is no phone on the bridge for those in crisis to use.

The group’s mission is simple yet profound: ensure no one else dies on the bridge. In their research, they looked to the example of San Francisco’s Bridge-Rail Foundation, who has spearheaded legislation to install safety nets to prevent jumping deaths. According to the organization, there have been more than 1,600 jumping deaths from the Golden Gate Bridge, more than any other location in the world. Feasibility studies for safety nets began in 2006 and wind tunnel tests determined that the installation of safety nets or a properly designed railing would not adversely affect the bridge. Environmental design was completed and approved in 2010 and legislation approving the funding was passed in 2012.

In a meeting last Tuesday, Coronado’s City Council approved a resolution providing support for beginning a feasibility study for safety measures on the Coronado Bridge. The City will not fund the study, but are symbolically supporting the Coronado Bridge Collaborative for Suicide Prevention group’s efforts to do so. Ironically the next day, 10 News reported that authorities took a woman into protective custody who attempted to jump from the bridge – the bridge was closed for four hours in both directions. Since January of this year, Coronado Police department has responded to 45 calls of potential jumpers on the bridge. Of those 45, 40 were able to be saved.

Much research is yet to be completed, and ultimately the decision will rest with CalTrans, the agency who oversees the bridge as it’s a state highway (State Route 75). The group is currently communicating with the state agency to begin the study.

Until now, Coronado has never really had a prevention voice. The Bridge Collaborative seeks to change that. The support of Coronado City Council is a big first step.

“People’s lives are at stake,” said Rhonda Haiston, co-founder of the Bridge Collaborative. “These people can’t do this for themselves. They are incapacitated. And being a nurse, I feel compelled to be an advocate for them.”

Council member Carrie Downey, whose initial support of the collaborative helped oversee bringing their initiative before City Council, stated in her support of the efforts, “When people find out you can no longer die from jumping from the bridge, they will stop trying.”

Every 40 seconds, someone in the world dies by suicide. And in San Diego County, it is the 2nd leading cause of death over the age of 10. For those left behind, the implications are devastating.

“For every suicide, there are roughly 11 victims,” explains Lewis. “The person who dies, and the 10 loved ones who are left in the wake.”

For Roxanne, 2 years have passed since Denise’s death. She misses her friend. She recalls her memorial service, during which friends and family wrote notes to Denise that would be later cast into the ocean.

It took more than a year after Denise’s death for Roxanne to gather the courage to let the notes go. On a quiet Coronado evening, together with Denise’s cousin, Roxanne went to the beach. The same place where just a year earlier, she said goodbye to her friend. This time, there were no clouds but rather a clear moonlit sky. As the waves lapped the shore, something caught her eye. It was a single star, twinkling brightly, perhaps as a signal that the time was right.

“It was Denise telling me it was time,” she recalls with tears in her eyes. “I knew it was time.”

With peace in her heart, Roxanne cast the messages to her friend into the sea.

The Bridge Collaborative is working diligently to see swift action in making the bridge safer and preventing suicides from it all together.

“What took the Bridge-Rail Foundation in San Francisco 10 years to do, I believe we can do in three,” said Haiston.

Not one more life. It’s time.

It’s Up to Us San Diego (Health and Human Services)
www.up2sd.org