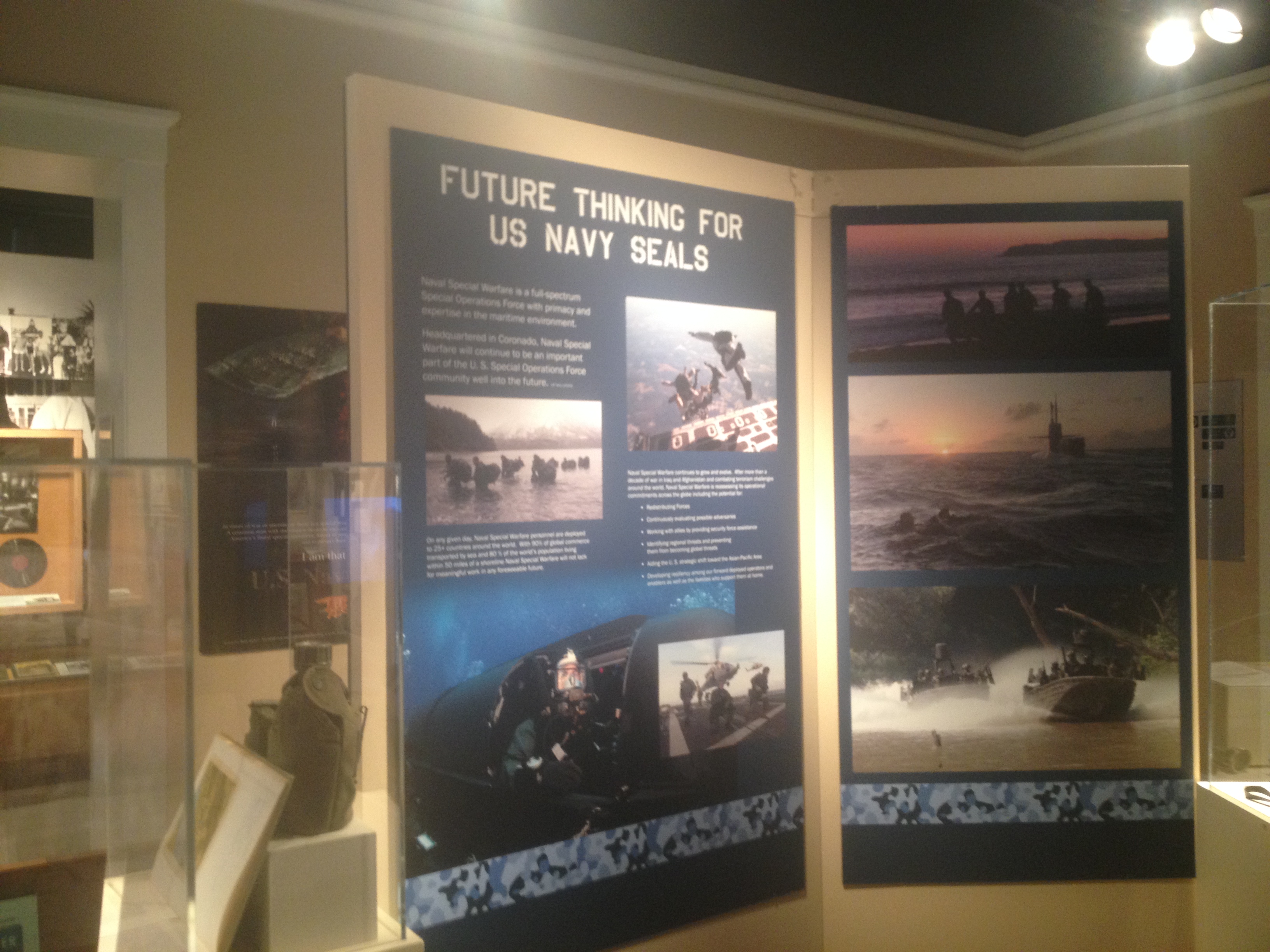 Coronado has long enjoyed a rich connection with the military, in particular the Navy SEALs. Everyone has heard of the real-life exploits of Navy SEALs from books, movies, and newspaper headlines. Coronado was the birthplace for the SEALs and is still, today, a center of SEAL operations. There is no doubt that Coronado is proud to be home to the U.S. Navy’s most elite and principal special operations force. 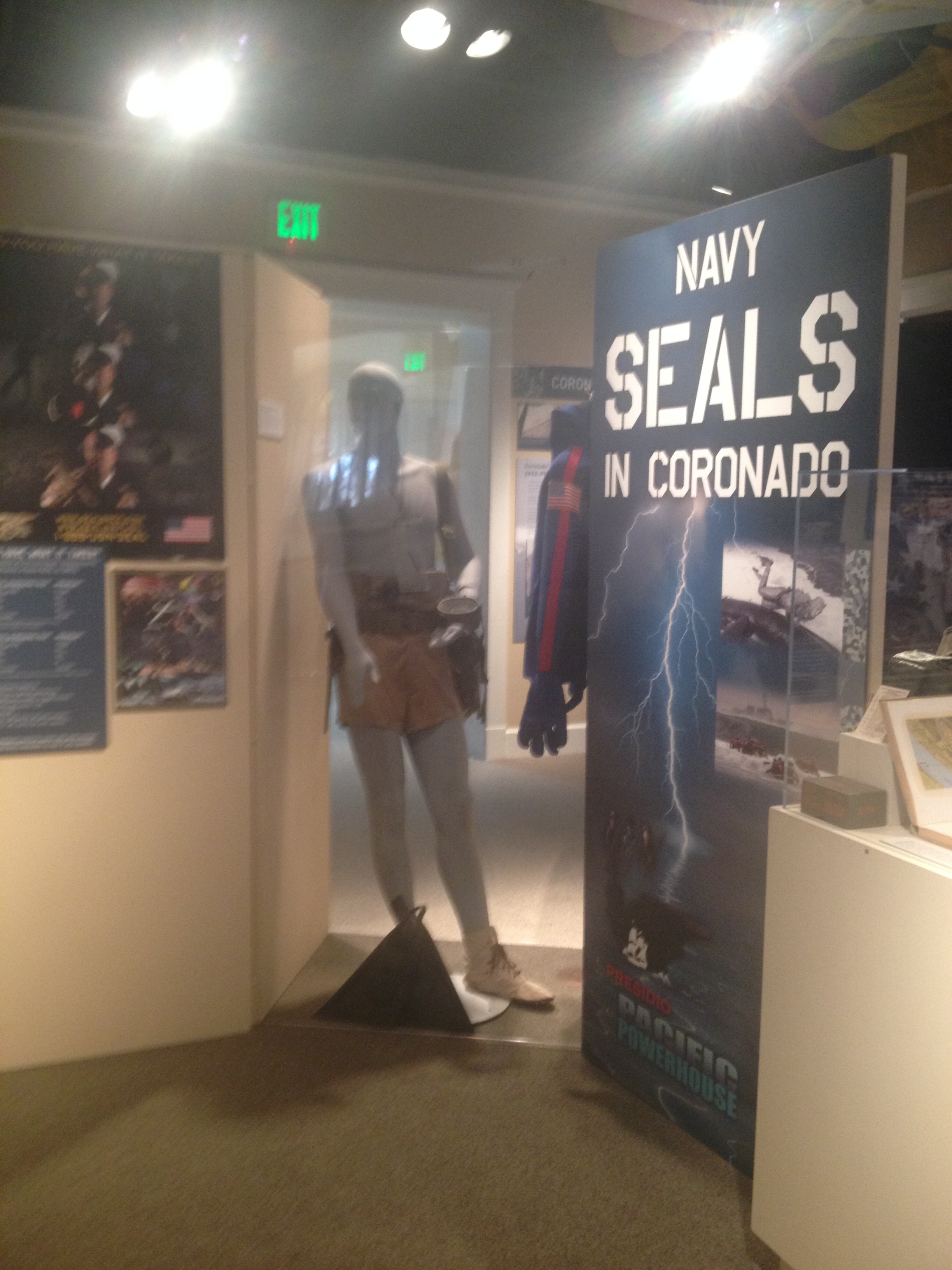 The Coronado Historical Association is currently hosting a temporary exhibit, “Navy SEALs In Coronado” to help educate the public, both Coronado residents and visitors alike, on the history, development, training and culture of the Navy SEALs. The exhibit is part of a larger consortium of exhibits developed by the San Diego History Center called “Presidio to Pacific Powerhouse” that centers around how the military shaped San Diego.

There are only two Navy SEAL museums in the country  the National Navy  UDT SEAL Museum in Fort Pierce, Florida and Coronado’s exhibit.

Through photographs, vivid chronological displays of memorabilia and actual equipment used in special operations – past and present  visitors discover how the SEALs and Coronado have grown up together. The exhibit walks through the invention of amphibious warfare in 1942, when in the early days of World War II, Navy “frogmen” in Underwater Demolition Teams (UDT) trained in Coronado to clear enemy beaches for Allied landings. Later, these special operations warriors opened up new avenues of warfare specialties in Korea when UDTs were called upon to conduct demolition raids on railroad bridges and tunnels along the Korean Coast. In 1962, President Kennedy established the first two SEAL teams from existing UDT teams that deployed immediately to Vietnam. The exhibit also discusses the role Navy SEALs have played in Iraq and Afghanistan.

The Navy SEALs are noted for their extraordinarily tough training, and special attention is given to the intense training SEAL candidates undergo through Basic Underwater Demolition/SEAL training (BUD/S). It is the most mentally challenging and physically demanding military training in the world. BUD/S is a five stage training period lasting over 8 months that pushes candidates to their physical and mental limits. On average, only 25% of SEAL candidates complete the training. 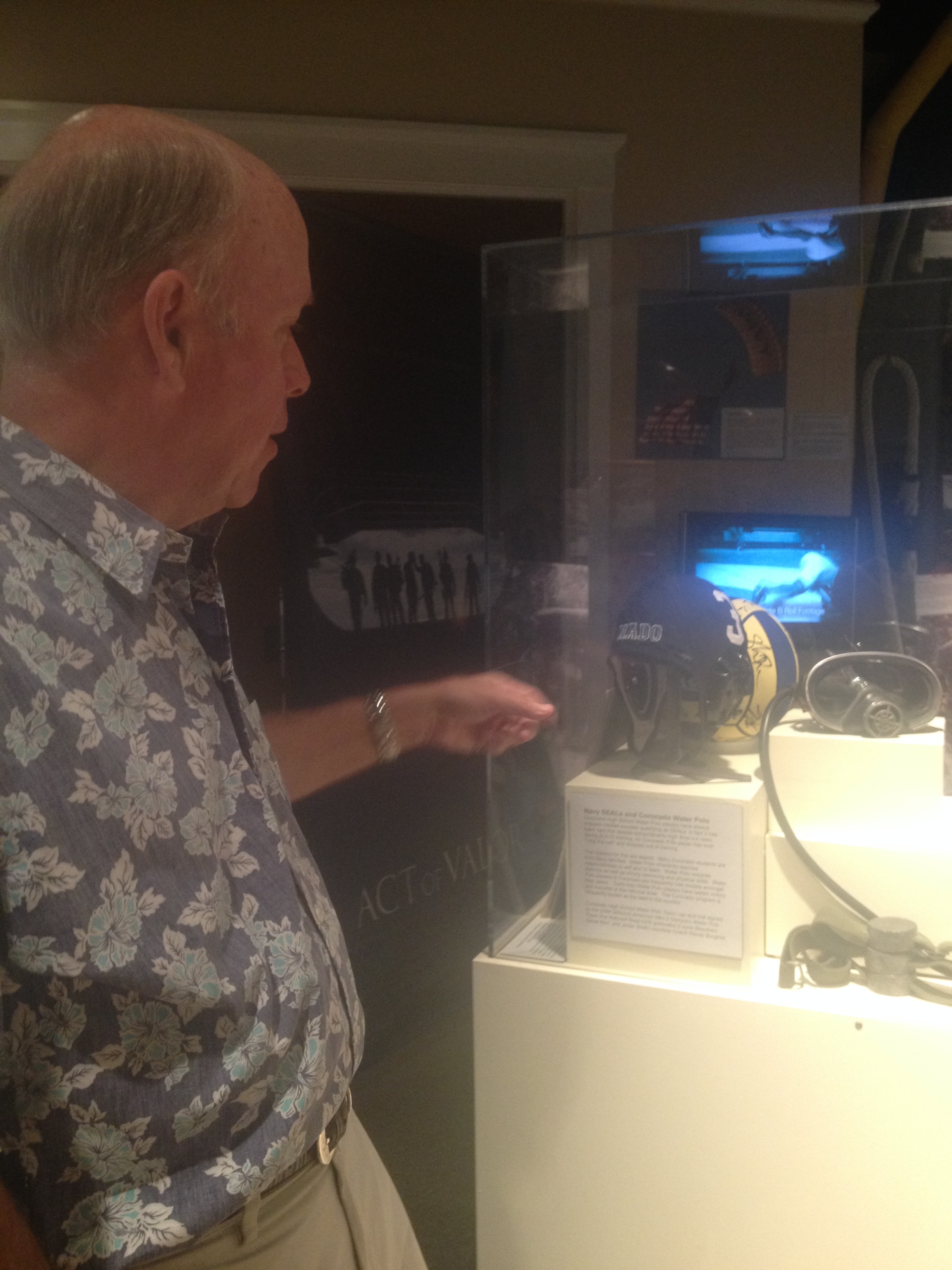 Linder explained that the Coronado Historical Association has always received a great amount of support from the Navy and in working together to create this exhibit, CHA committed to telling the true story of the Navy SEALs, depending on true accounts from over 100 stories from real active duty and retired operators. The exhibit features authentic military equipment, training aids and other paraphernalia, including two Unmanned Aerial Vehicles (UAVs), a Navy SEAL “Leapfrog” parachute and recruiting videos.

The exhibit concludes with explaining the Navy SEAL ethos, a warrior’s creed, that explains the essence of what it means to be a Navy SEAL, and articulates how these warriors are to conduct themselves in war and in peace.

“Navy SEALS in Coronado,” which will be on display through February 2015, explains the real stories of the Navy SEALs. Linder explains the educational and positive exhibit tells those stories well.

“We really went out of our way to explain some of that magic sauce’  the things you don’t always see.”

Other San Diego-area museums that are part of “Precidio to Pacific Powerhouse” include Flying Leatherneck Aviation Museum, San Diego Air and Space Museum, USS Midway Museum and the Maritime Museum of San Diego.

Admission to the Museum of History & Art is $5 for adults; $3 for seniors (65 and over); free for children (15 and under). Admission for CHA members (and accompanied guests) and active-duty military (and families) is also free when valid I.D. is presented. The Navy SEAL Foundation will receive 10% of admission proceeds.

Building a new home is an exciting endeavor, and it typically takes months to see significant progress. But a new construction project at the...
Read more
Military

On Sunday, June 14th, the Hotel del Coronado welcomes a very special guest, and this time, it's not a secret. Gary Sinise and his...
Read more
Community

Kyle McCarty is a creator with an entrepreneurial spirit. He's always had a knack for fixing things. When he was younger, his father once...
Read more