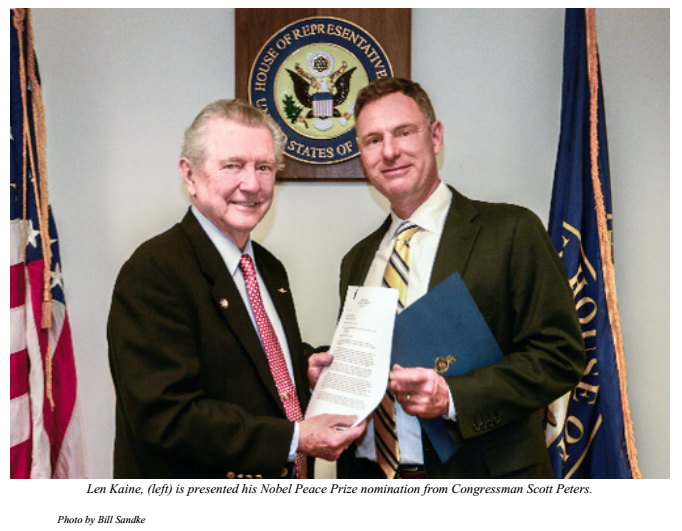 Not so fast! In the case of Len Kaine’s nomination for the Nobel Peace Prize, metaphorically, it appears lightning has struck twice in same place.

Congressman Peters said of Mr Kaine, “He has selflessly dedicated his time and his efforts as a non-paid volunteer for more than forty-two years in the pursuit of two primary life goals: world peace and improving the lives and opportunities of people the world over.”

Admiral Thomas Hayward, retired Chief of Naval Operations and senior advisor for GRS, is pleased to announce the good news of Len Kaine’s well deserved nomination for the Nobel Peace Prize. He added “Len Kaine is a dedicated leader who clearly demonstrates his desire to serve others throughout the world and to pass on a simple philosophy of treating people with dignity and respect. As you read the nomination, you can see Len Kaine truly answers to a higher authority and is a driving force for positive change in our world.”

(To view a copy of the full nomination, please visit www.goldenrulesociety.org/nobel.htm)

This is Len Kaine’s second nomination having also been nominated in 2003.

Kaine is a decorated US Navy Captain and retired combat fighter pilot who has devoted his post-military career to serving humanity through his world-wide Golden Rule Society.

Kaine has devoted most of his adult life to better the lives of young and old, men and women of all nations and of all walks of life.

Through his unwavering commitment and single minded focus his efforts and actions, have touched and improved the lives of millions. Further, in teaching the ways of the Golden Rule, he has immeasurably improved and fostered a mind-set conducive to a world at peace.

His passion and the success of Kaine’s titanic efforts apparently infected a number of like minded people. The Golden Rule Society (GRS) is led and managed by a phalanx of highly educated professionals and dedicated leaders with strong ties to the community and other service organizations all bound by that common visiona world at peace. It is quite important to point out the these are all non-paid volunteers which allow 100% of the net funds raised by GRS to go directly in support of men, women, and children throughout the world and to other non-profit beneficiaries.

In keeping with the objectives of Alfred Nobel’s decree that the Peace Prize shall be awarded to the person who shall have done the most or the best work for fraternity between nations, it is a distinguished honor to be nominated as a Laureate for the Nobel Peace Prize even once.

Two nominations are rare indeed but in the case of Len Kaine, it is proper acknowledgement of all his hard work and inspirational goals.

Lightning can and did strike the same spot twice!