Golf Report: Playing at Coronado may become a bit pricier 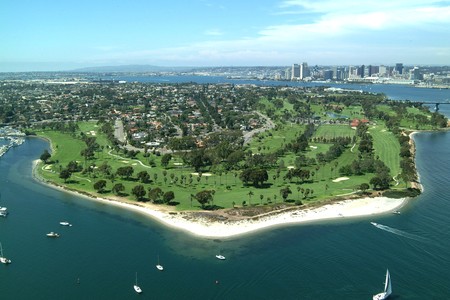 With its cool breezes and spectacular views at every turn, the Coronado Municipal Golf Course has offered one of the biggest bargains in America for more than 50 years. It figures to always be as such, but the experience is about to get pricier. The Coronado City Council today will consider green fee increases that would raise the cost of walking a round from $25 to $30 on weekdays, while creating a first-ever separate weekend rate of $35. The three other significant changes: the advance booking fee would rise from $38 to $60, the tournament rate would go up from $32 to $40, and the current unlimited ticket system would be eliminated. The ticket system has allowed golfers to play 364 days a year (the course is closed on the Fourth of July) for a flat rate of $930. A weekday-only ticket has been $720. In the new system, golfers would purchase a prepaid card that would cost $1,050 for 50 rounds ($21 per round) or $1,500 for 100 rounds ($15 per round). The proposed fees, if passed, would go into effect Oct. 1. Roger Miller, who became the city’s director of golf services in July, said the fee increases are needed to close a deficit in the enterprise fund’s operating budget. He said the 30-year-old irrigation system needs to be replaced and a stalled bunker renovation project should be completed. The combined cost for those projects has been estimated at $3.14 million. “There’s no question the rates need to go up,” said Miller, 42, a Temecula resident who most recently managed the Sun City North Golf Course in Riverside County. “We have to make improvements to the golf course to be competitive in the future, and the amount we’re proposing is still well below market value based on our location. The fee structure we’re proposing should be good for a few years into the future.” The city last raised green fees at the course in 2004, bumping them by $5 per round. Read the entire Union Tribune article here.