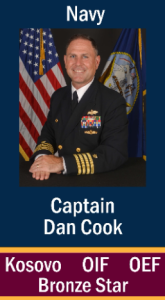 CAPT Dan Cook devoted a 25-year career of active-duty service as a Surface Warfare officer and then Civil Engineer Corps officer to the U.S. Navy. After completion of the Naval Reserve Officers Training Corps program and a bachelor’s degree in architecture from the University of Notre Dame, Cook was commissioned, trained and served his first sea duty
assignments in Norfolk, Virginia.

He finished his career in Coronado, California, after serving in three of his most memorable assignments as the commanding officer of Amphibious Construction Battalion One, the operations officer for Naval Facilities Engineering Command (NAVFAC) Southwest, and as the public works officer for Naval Base Coronado, where he led design and construction modernization efforts for the new Coastal Campus on the Silver Strand for the SEALs. Prior to assignment in Coronado, he was the commanding officer at Naval Construction Training Center, Port Hueneme, California. Overseas, he was the assistant regional engineer in Joint Region Marianas, Guam. In other shore assignments, he was the executive assistant to the commander of NAVFAC Atlantic in Norfolk, an architect for Naval Station Norfolk’s Public Works Department, and a construction project manager at Naval Station Great Lakes and Recruit Training Command during the recapitalization of the Navy’s boot camp. He earned a master’s degree in construction engineering from Purdue University.

Operational assignments included service as the operations officer of the 22nd Naval Construction Regiment and operations officer of Amphibious Construction Battalion Two, supporting operations Iraq and Enduring Freedom. Onboard USS Arleigh Burke (DDG 51), Cook was the fire control officer and strike warfare officer, and onboard USS Nashville (LPD 13), he was the repair officer and main propulsion assistant. In these assignments, he deployed to the Mediterranean, Europe, Africa, Cuba and the Middle East.

CAPT Cook’s personal awards include the Legion of Merit, Bronze Star, Meritorious Service Medals, Navy and Marine Corps commendation medals, and the Navy Achievement Medal. He qualified as a Seabee Combat Warfare officer and a Surface Warfare officer. He also is a registered architect. His wife, Emily, and seven children supported him all the way and were active members of the Coronado community.