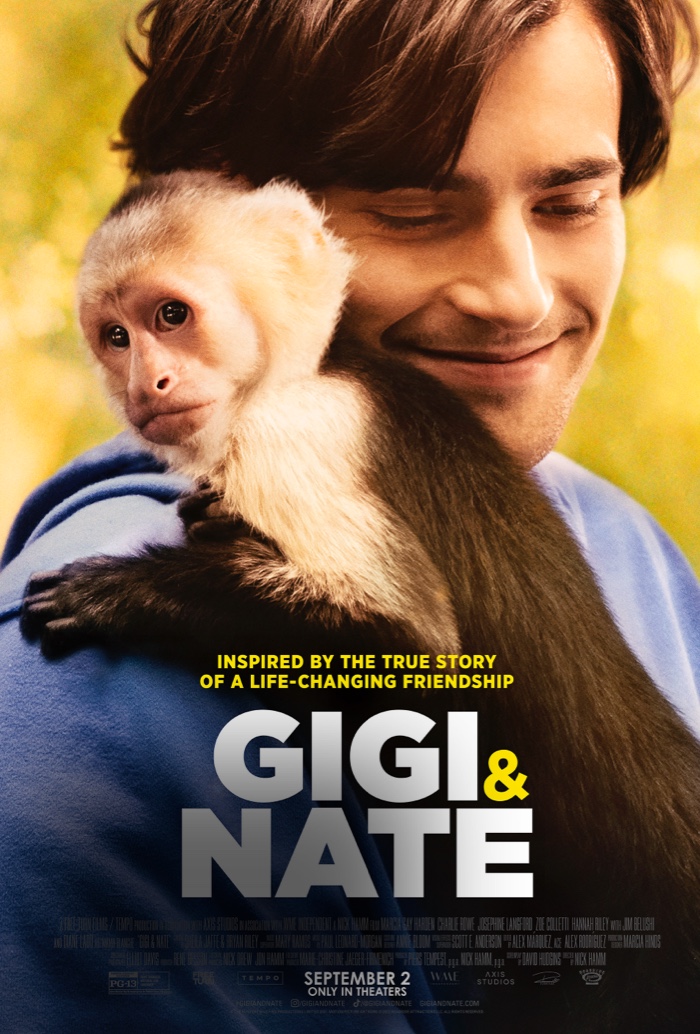 Bring tissues and prepare for an emotional journey as you watch Gigi & Nate. A captivating capuchin monkey named Gigi, rescued from a California petting zoo, steals the show with endearing antics from sticking out her tongue, to her expressive eyes, to the hope she brings to Nate, played convincingly by Charlie Rowe, a young depressed quadriplegic.

The movie begins when Nate, in the prime of his life at 18, does an amazing flip into the water during the family’s Fourth of July barbeque celebration at their Happy Days lake cottage in North Carolina. Shortly after, he starts feeling sick, and you feel his pain during the journey that started with him contracting meningitis from the contaminated water.

The movie was inspired by a true story, and my movie buddy Carolyn and I felt it would have been nice if they had given more background on the type of young man Nate was before the incident. You catch glimpses when his mom Claire, played empathetically by Marcia Gay Hardon, and dad Dan, played by Jim Belushi, recall stories while he is in the hospital. It was nostalgic to see both of these familiar actors.

Jumping ahead four years, the movie chronicles the family’s story as you find them settled back in their Nashville home, where they have built a casita out back. It is adapted for Nate’s special needs, along with lots of windows looking out onto the trees. The family also consists of Nate’s younger high school age sister Annabelle, played by Hannah Riley, older college age sister Katy, played by Josephine Langford, and liquor loving grandma, played adeptly by Diane Ladd.

As Nate’s depression worsens, his mom contacts Cebus for Independence, who have a specially trained capuchin monkey named Gigi who can potentially become Nate’s service animal. We would have loved to see more about the training that monkeys go through to become service animals.

Gigi becomes an indispensable part of Nate’s physical therapy, helping him by putting balls in his hand and even turning pages in books. They are sweet as they paint together, and the emotional connection means everything as Gigi snuggles with him. The doctors note that his progress is remarkable. After posting pictures online, the duo gains a large following.

Things turn sour when Chloe Gaines, played cunningly by Welker White, from Americans for Animal Protection, accosts Nate at the grocery store demanding Gigi be removed. Tensions escalate after Nate sneaks out to a party with Gigi and pictures go viral. The group then organizes a not so peaceful protest in front of their house.

Nate speaks passionately about the impact Gigi has had, crediting her for saving his life, at a capital hearing where the fate of capuchins as service animals in the state of Tennessee will be decided. It’s painful to watch when the two have to part and hold fingers through the cage. Things look up when the grandma learns that capuchins are legal as service animals in the state of North Carolina, and the family rallies to buy their former vacation cottage back and make it their permanent home. All ends well for Nate as he goes off to college, with Gigi in tow of course.

I’m a sucker for any story with a grain of truth and I’m biased towards monkeys, since that is my daughter’s favorite animal. How this family bonds together to handle this tragedy is remarkable and the touching human-animal bond between Gigi and Nate is heartwarming. The family takes in Gigi as a rescue monkey, and she ends up helping them find what they need most – hope.